Why Did I Watch This? – Dollman 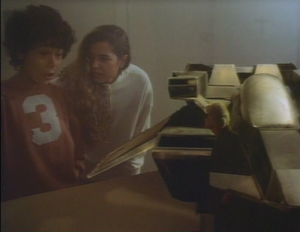 Full Moon Entertainment was (and still is) a staple of B-movie cinema.  Demonic Toys, Subspecies, and the perennial Puppetmaster series were all better-than-they-should-have been horror movies that spawned sequel after sequel and catapulted Charles Band to some level of success.  In addition to these was the Trancers series, a time traveling zombie flick starring Tim Thomerson.  I didn’t love the first one, but was somehow always interested in checking out Thomerson in the Band-penned Dollman.  This is partly because of its absurd premise, but the later crossover with Demonic Toys couldn’t have hurt either.

While Band only provided the script, Dollman was, instead, directed by Albert Pyun.  Pyun is known mainly for the well-liked Cyborg, 1990’s infamous Captain America film, and Action A Go Go favorite: Nemesis.  However his IMDb bio begins wth “No other film director has been the victim of so much vituperation as Albert Pyun.  Frequently compared to Edward D. Wood, Jr….”

Alone at midnight with a chest cold.

Brick Bardo (the name so nice Pyun used it twice… in 1991.  He used it several other times in his career because it was extra nice, I guess) is a no-nonsense cop from another planet.  He’s your run-of-the-mill Dirty Harry wannabe with a big gun that makes criminals explode.  After he’s punished by the mayor for letting his inner “loose cannon” take care of a hostage situation at the Laundrymat (apparently that’s how they spell Laundromat on Planet Arturo), he is coaxed at gunpoint into meeting his archnemesis in a junkyard.  It is important to note here that his archnemesis is a disembodied, floating head named Sprug.  One shoot-out later and he’s chasing Sprug across the galaxy in a spaceship.

Unfortunately, they both crash land in the South Bronx… only to find that everyone on Earth is nearly 50x their size!  Bardo (the titular Dollman, obviously) befriends a single mother from the Neighborhood Watch (Kamala Lopez), while the floating head “befriends” Jackie Earle Haley.  Haley is the leader of the gang that is seen brutally terrorizing the South Bronx throughout the movie.  So it’s disheartening when the floating head provides him with a dimensional fusion bomb that “sends everything within 3 parsecs hurtling into another dimension”.

The good news is that Dollman is on the case, and his ultra-powerful gun that explodes criminals on Arturo still does a decent bit of damage on bad guys here on Earth.  Being very small and therefore very hard to hit makes Bardo a more formidable opponent than one would think.  In fact, where the movie failed the most is continuously telling us how small our hero is instead showing us his smallness in creative ways to make the central conflict stand out from most other science fiction/action movies.

At the end, (SPOILER ALERT), good prevails… although I have a pretty large issue with the ultimate ending.  Even though Jackie Earle Haley is defeated, he still manages to detonate the bomb.  So while there’s a good amount of set-up about how devastating the bomb is, it doesn’t actually destroy anything when it finally goes off.  Cool.

As with most movies of it’s type, Dollman is filmed rather flatly with a few interesting compositions… mostly necessitated by Brick Bardo’s unique, close-to-the-ground POV.  But for the most part, the style fits the straightforward story and slightly ironic tone.

What Dollman really has going for it is creativity and that its tongue is firmly planted in its cheek.  It never outright winks at the audience, but the filmmakers clearly understand that there is no use in making a serious movie about a hero who is 12 inches tall.  Although they do show remarkable restraint when they wait nearly a whole hour to make their first dick joke!

The first act is surprisingly strong since there is definitely a lot fun to be had when the outlandish characters and premise are introduced.  It looks like a good chunk of the money was spent early on as well since not only do the first 15-20 minutes take place in outerspace, but also Planet Arturo is where the movie showcases the gore effects of Brick Bardo’s super gun making bodies explode in a red, chunky mist. 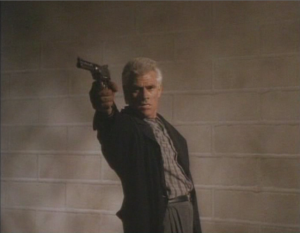 Despite my issue with the dimensional bomb that fails to pay off at the end, Dollman itself is pretty solidly written.  We here at Action A Go Go have watched our share of B-movies and it is almost surprising how many lack a logical story progression given their typically simple plots.  The characters in this film are set-up broadly enough that it’s easy to understand why they do the things they do, which leads to an adequate climax in terms of both action and drama.

That being said, the movie does drag a bit towards the middle as the characters spin their wheels waiting to arrive at the climactic shootout.  It really feels like the filmmakers had no idea how to get there to be “action” in between landing on Earth and the final fight, so they would arbitrarily have characters say “Hey, let’s go and try to get that Dollman guy”  Additionally while this was a lot more fun than the similarly fish-out-of-water Trancers, Tim Thomerson didn’t have anything close to the same chemistry with Lopez in this as he did with Helen Hunt (which was the standout strong point of that movie).

A good microcosm of where the movie fell flat was a scene where Bardo is unable to use his gun because he’s trying to stealthily enter the villains’ base in order to rescue Lopez’s character.  In a small pipe he encounters a rat and simply points the gun at the animal in order to scare it off.  Since the film almost never asks him to succeed without his super-gun, this would have been a great opportunity for something actually thrilling: Brick Bardo wrestles a rat.  Bam!  I’m there.  Instead, the rat scampers off, Bardo knocks a henchman out with a metal rod in order to get a good vantage point, and he starts shooting again.  With the complete lack of storyline that truly highlighted his stature, the movie really would have played the same if it was called “The Armed Guy Who Was Kind of Hard to See”.

Maybe?  It does have some slow moments, and even gets a touch overly serious towards the end.  But if the idea of a 12-inch tall cop fighting gangbangers in the South Bronx in the early 90’s appeals to you, it will definitely suffice.  I bought this for $7.67 in a three-pack with Demonic Toys and Dollman Vs. Demonic Toys, so I would have to say it was worth that cost.  You might be disappointed they didn’t really explore his smallness enough, but maybe that’s handled better when he has to fight those demonic toys…