Netflixing Under the Influence: FURIOUS 7 Inspires a Viewing of COLLISION COURSE With Beam & Coke

In honor of next month’s Furious 7, we at Action A Go Go are dedicating March to movies about cars.  What better way to do that then to review notoriously terrible buddy cop movie, Collision Course.  I was happy to learn that it concerns quite a few fast cars and a feud between the American and Japanese auto industries.  It also stars Jay Leno and Pat Morita in a mismatch that seems straight out of that one scene with the cartoon cat from Last Action Hero.

Two men “as different as hot dogs and sushi”!  Sign me up.  As you can see from the trailer, this is going to be a parade of racial stereotypes and unfunny, nonsensical jokes.  I can assure you that there is no contextual reason for Jay Leno to snidely remark, “Hey, hey!  We’re The Monkees!”  Let’s get into it.

As has often been the case, I watched this alone with some Jim Beam and Coke Zero.  I got this through Netflix’s DVD service and had to pop it up from #435 in my Queue.  It was a wonderful, laugh-free Sunday evening.

First off, this movie is so oddly tailored for Jay Leno.  He’s not credited as a writer or producer, but the movie’s about a jeans-wearing, smart aleck detective investigating a conspiracy in the world of concept sports vehicles.  Did Jay Leno cultivate his love of denim and collecting cars during the filming of this embarrassing movie?  Or was he just giving a lot of notes on set?  Regardless, we open on a Japanese businessman who is accidentally murdered in Detroit by two henchmen (the always welcome Tom Noonan and Randall “Tex” Cobb).  The Japanese guy was there to sell some top secret car engine blueprints to a disreputable mobster (a mustachioed Chris Sarandon) with ties to a local automobile manufacturer. 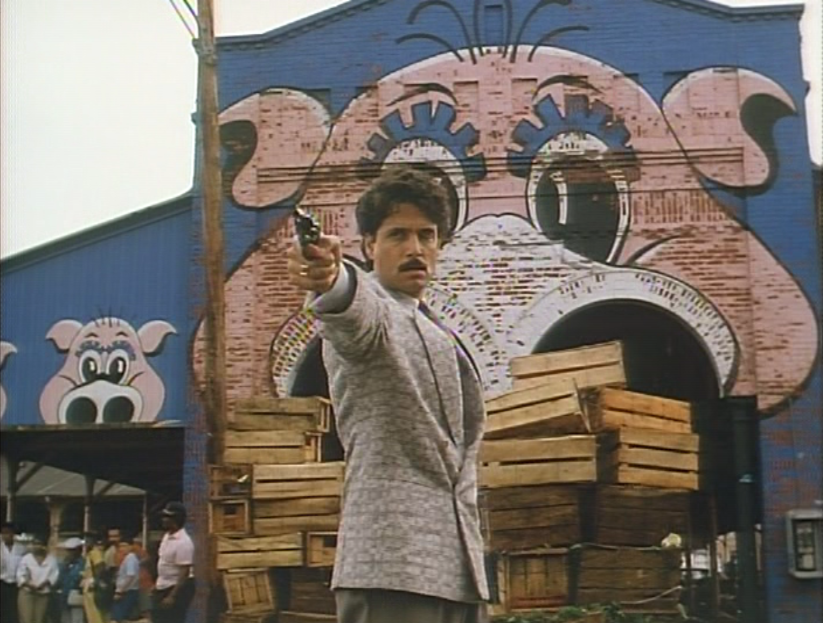 While disposing of the body in a junkyard, they kill a security guard who happens to be a friend of rule-breaking, fast car-loving, Tony Costas (Jay Leno).  Leno’s character is exhausting right off the bat when it becomes clear his smarmy wisecracking adds up to nothing more clever than asking for the phone numbers of pretty women during investigations.  Meanwhile, The automobile manufacturer that the departed worked for knows he absconded with the plans and tasks Japanese police officer Fujitsaka Natsuo (Pat Morita) with flying to America to find him.  Collision Course is light on details, but apparently the entire Japanese economy depends on making sure nobody in the United States can develop this revolutionary car.  After Costas and Natsuo bump into each other doing unofficial policework in the victim’s apartment, they reluctantly team-up.  Relations between Detroit and Japan are rough due to the collapse of U.S. auto industry and Japanese trade practices which the locals blame for their economic woes 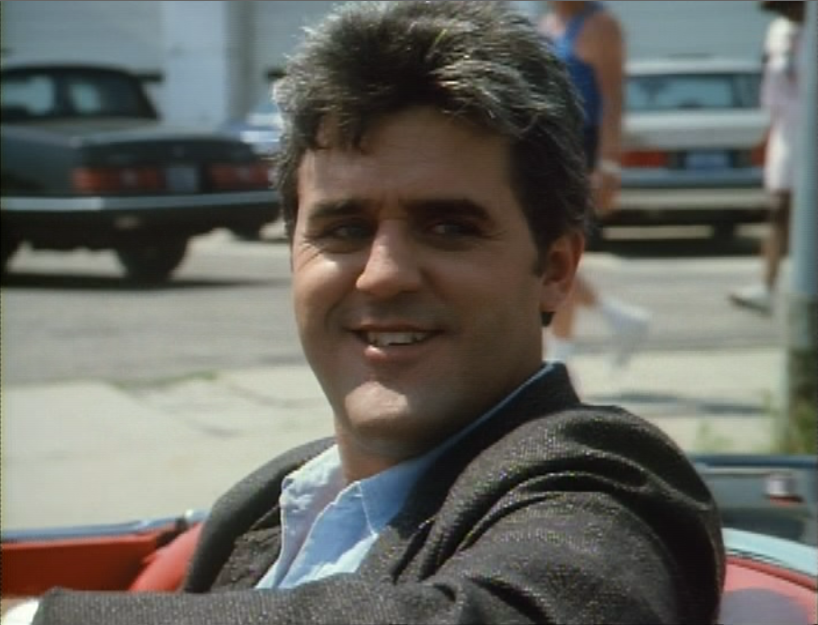 As they continue to investigate, the cultural clash continues to intensify.  When they investigate Tom Noonan’s character’s house on a lead, the poorly established U.S./Japanese differences start to come at an obnoxious clip.  At first, Natsuo  is amazed by the concept of doorbells!  Then, Jay Leno breaks all the rules by fabricating probable cause instead of getting a warrant.  After they break-in, the house’s security alarm goes off.  Natsuo asks, “Won’t someone call the cops?”

To which Costas replies, “Nah.   When Americans hear an alarm they just say, ‘Turn that sh*t off!'”  It’s a statement which leaves Natsuo quietly perplexed, but he relents.

Finally a neighbor shouts, “Turn that sh*t off,”

Natuso replies with an understanding “Ooooohhhhh.”  Dull exchanges like this happen over and over again, where they simply state potential behavioral disparities between two cultures and expect the audience to laugh.  Overall, the friendship/rivalry isn’t set-up in a meaningful way.  Jay Leno’s Costas is too good-natured to pull off the virulent racism he’s supposed to have (even when making constant references to Godzilla and the “backwards” Japanese customs), while Morita’s sleepy performance as Natsuo keeps everything on much too even a keel to create any true conflict. 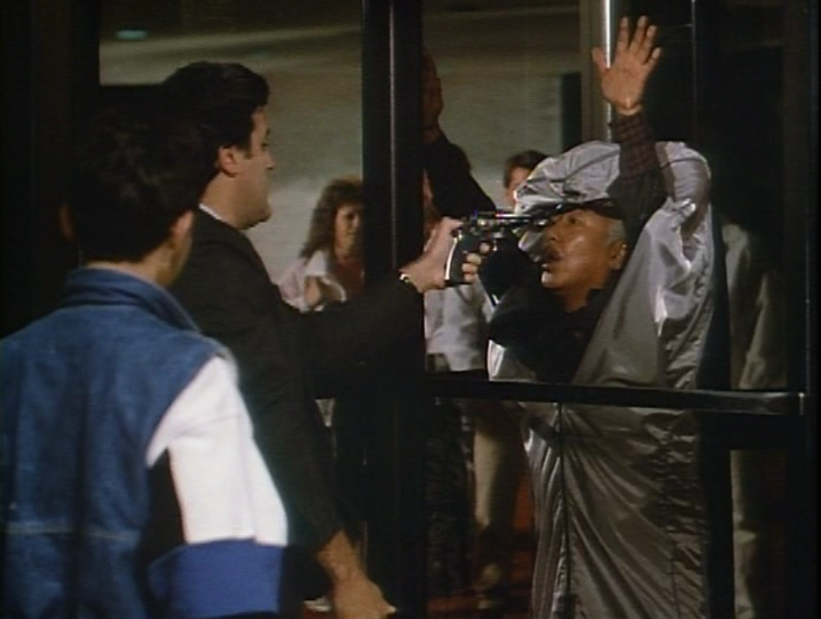 At one point they enter a bowling alley where Natsuo is accosted by a group of blue-collar Detroiters. “Hey, did somebody order sushi?” someone says when they see him.  It’s pretty standard, ignorant stuff.  However, it starts to almost get funny for the couple of seconds they decide to inject some talking points into the conversation.

Another man in the bowling alley yells out “What about the balance of trade?!”

To which Natsuo replies, “We only do what we must to compete in the world market!”

Someone else shouts, “Yea, well you brought those tariffs on yourself!”

Natsuo then says, “Every American should be an ambassador of goodwill.  How do you expect to improve the relations of other nations if you show them no respect!”

The idea of an intelligent debate occurring instead of racially-charged epithets coming from the “working man” likes of Mike Starr and Richard Noyce, is almost clever.  However, in direct contrast to this, Jay Leno is in the background explaining cultural references to the dense Japanese cop who is baffled by foreign concepts like “60 Minutes” and “hair mousse”.  Then the whole episode somehow devolves into a goofy fight scene with the incredibly poor Michael Jackson rip-off “Overload” by Surface playing over it.  The song is tonally inappropriate and poppy for what’s supposed to be a blue collar brawl and unfortunately it’s not Google-able, so I can’t even play it for you.  Also, Mr. Miyagi tries karate and gets punched out instead!  Oh, the belly laughs that were had! 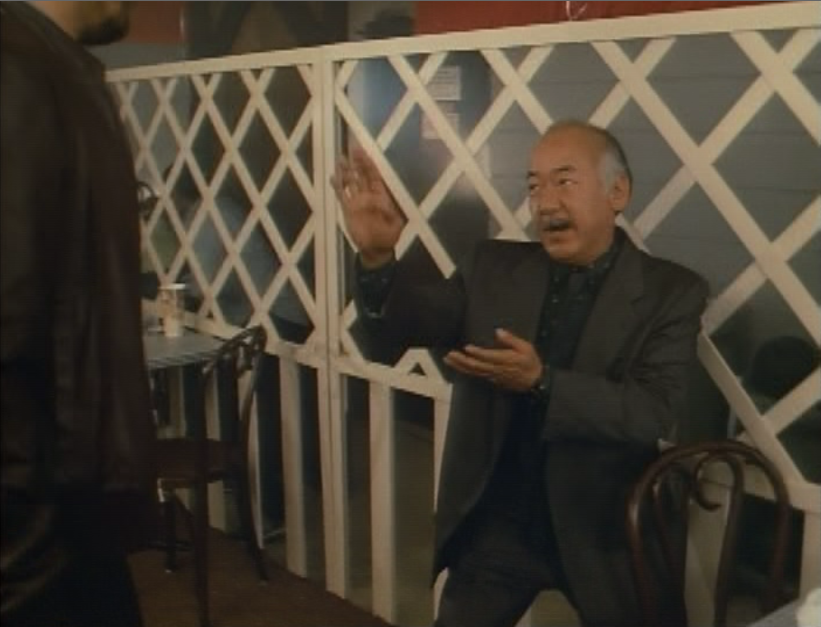 There is no real mystery to be solved here.  Our heroes know what’s up and just work through the motions until they defeat the bad guy in an ultimate showdown.  During this period Costas learns not to be intensely racist or whatever and they give each other a knowing wink and smile before Natsuo has to get on his plane back to Japan.  The final scene where they look at each other at the airport actually rocks pretty hard because director Lewis Teague makes the bold decision to end not just in a freeze frame, but a splitscreen freeze frame (see the header image at the top of this article)!

They’re a long time coming, but the action setpieces towards the end of the film are shockingly competent and thrilling.  You can see in the trailer there is a precarious-looking stunt when Natsuo and Costas jump out of an exploding house.  The stuntmen come dangerously close to the explosion and debris.  Following that is a pretty solid combination of action and comedy.  They hop on a train to get away from a maniacal and armed Tom Noonan, but it stops several feet later when it gets to a station.  Then while they’re waiting for the henchman to approach, the inept Natsuo wastes their only bullets.  However, he does happen to have a grenade on his person from when they raided a militia earlier (“Oh, great.  Japanese cops don’t use guns, but they keep grenades in their pockets?!”)  Through teamwork and quick thinking they trick Noonan into getting himself blown up. 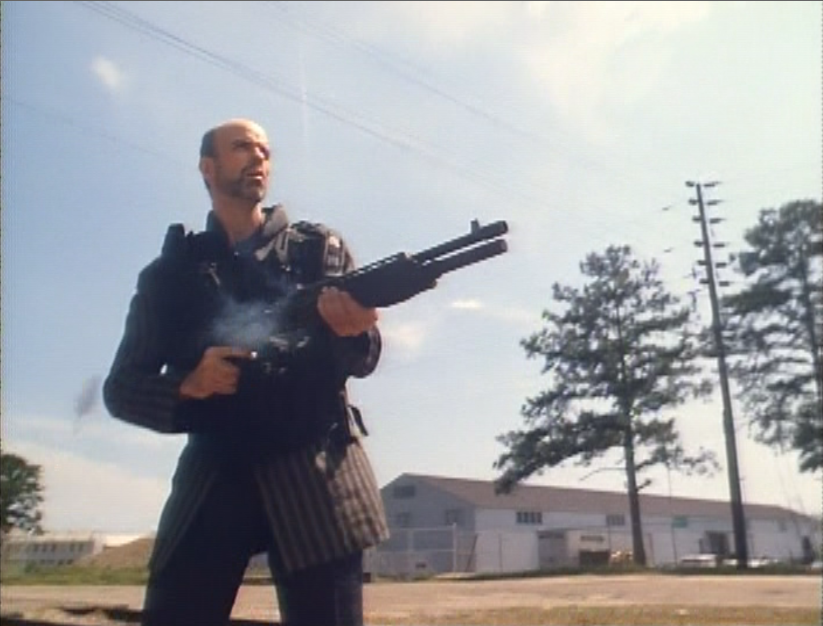 Later there is a chase scene with some pretty spectacular motorcycle stunts.  I swear (and it might have been the whiskey), but about halfway through the motorcycle chase I muttered aloud “What just happened?! This is kinda awesome!”  After Natsuo and Costas get off the motorcycle, they immediately begin a new chase in a soup-ed up old Toyota that is housing a prototype of the experimental engine that started this whole affair off… and the same really terrible song that was playing for the motorcycle sequence starts back up again.  (Note: This song is also by the group Surface and also doesn’t exist on the Internet)  However, the chase ends in one of my favorite cliché film stunts.  One of the villains car’s speeds up the loading ramp off the back of a semi-truck and explodes out the top!  Awesome!  It’s like Teague almost made a good action comedy, but instead made an unfunny comedy and included an unconscionably limited number of badly soundtracked action scenes.

Oh, and then this scene happens.  The look of it is absurd and unconvincing, but those last few frames are cathartically violent.  After that, the car is tapped on the passenger side rear bumper by another vehicle and Costas barely has time to drag Natsuo out of the windshield before the whole thing explodes for some reason.  If Chris Sarandon didn’t have a crushed skull from Pat Morita’s feet, he’s definitely dead now.  It’s a ridiculous and over-the-top moment that could only come from the film’s screenwriter Robert Resnikoff, who was also writer/director of The First Power.

Pat Morita’s performance is uncomfortably lethargic.   He mostly shuffles around and mumbles through the entire film very confusedly.  I hate to say it, but the complete apathy he exudes seems to suggest issues resulting from his famous struggle with alcoholism.  The only scene where he does have any punch is a humiliating spoof of the scene in The Karate Kid where he knocks back shots of whiskey and shouts “Bonsai!”

Even the character he’s playing doesn’t give off that level of law enforcement expertise as say, I don’t know, I’m spit-balling here, Jackie Chan in Rush Hour.  Natsuo’s neither a great detective, nor even a Hollywood caricature of a karate master.  It’s a strikingly breezy performance, but since he’s surrounded by the mostly funny henchmen played by Cobb and Noonan, the fast-talking Costas, and some big action scenes it just seems like he’s vaguely high on something throughout. 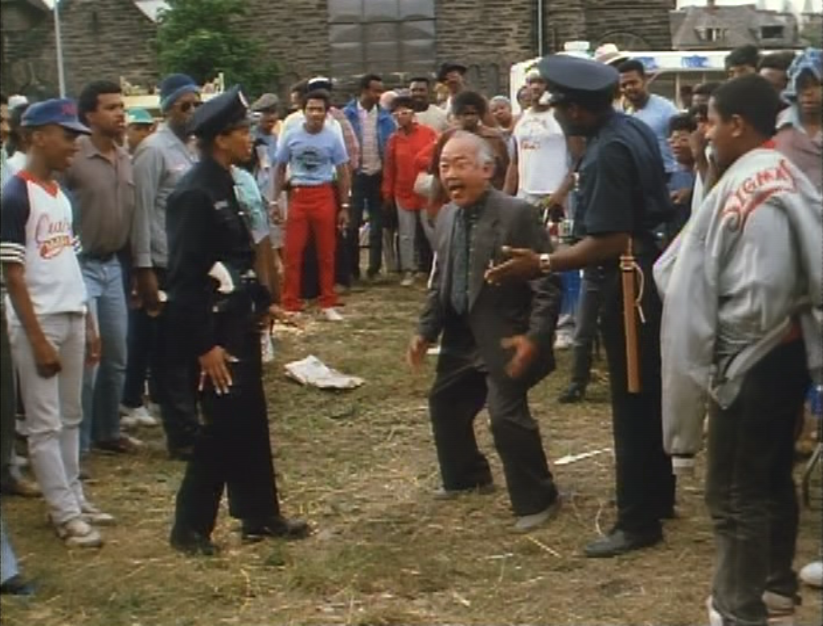 In fact, both Morita and Leno show more personality on the poster than they do in the entire ninety-nine minutes of film.

It was almost worth watching.  The action scenes come a little too late to redeem the mostly by-the-numbers enterprise (oh, and the casual racism), but I will admit that I was more than pleasantly surprised when they finally happened.  Also, if you’re a fan of the Rush Hour movies, it’s interesting to see the elements of that series that seem to have been straight-up lifted from Collision Course.  I would walk through them, but re-living the first forty-five minutes of this movie again is the last thing I want to do.  I’ll just leave you with the fact that while the structure of this seemed to inform the first Rush Hour, the complete lack of effort or verve by the actors is more on par with the obnoxiously lazy Rush Hour 3.

All images courtesy of Interscope Communications