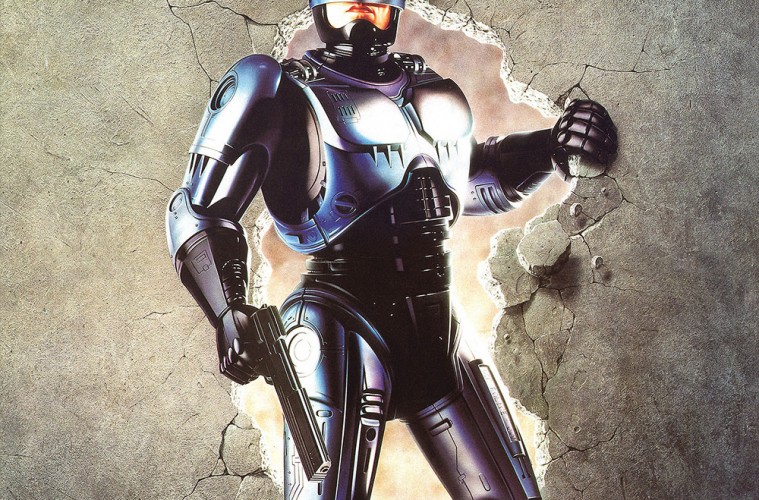 Netflixing Under the Influence: ROBOCOP 2 Gets Wacky 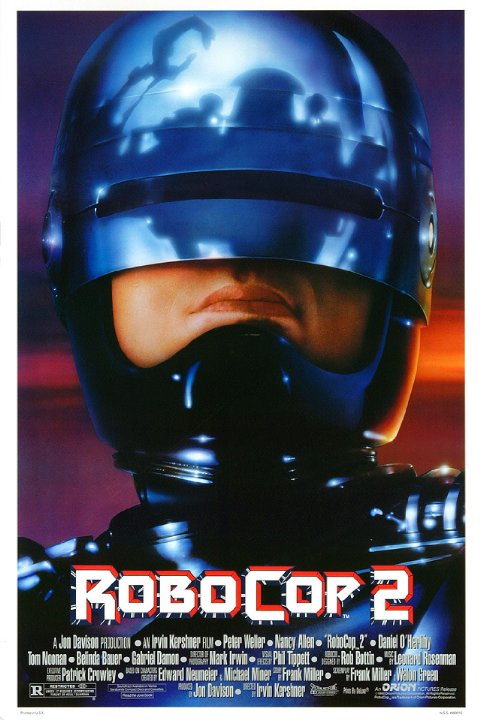 1987’s Robocop is easily one of my favorite movies.  It’s a cutting satire with thrilling, over-the-top action and a tight and often humorous screenplay.  Of course a sequel to a stone-cold classic like that is well-anticipated, but when the original creative team is mostly gone it is difficult to muster anything greater than cautious optimism.  This is even true if the screenwriter was behind several seminal comic books and the director made the best Star Wars film.

Robocop 2 was mostly a critical failure, which is why I’ve always avoided it.  But more and more I have heard people sing its praises… especially regarding the sequel’s version of the ED-209 malfunction from the first film.

Decided to make it a cocktail kind of night.  For this viewing, I drank a few concoctions involving rum, mint, rhubarb bitters, and simple syrup.  That seems a little extravagant considering the fact I was alone, but it is summertime, after all.

This was initially around #80 or so on my Queue.  However, in a pretty stellar deal, I recently replaced my Robocop DVD by buying the entire Robocop trilogy on Blu-Ray at Amazon for $18.50.

After setting up that Detroit is cartoonishly crime-ridden despite the events of the first film (there is even an organized crime ring of kids in baseball uniforms led by their ruthless Little League coach), Robocop (Officer Alex Murphy as played by the returning Peter Weller) is struggling to keep up in keeping the streets safe.  He’s also still struggling with the specter of his past life as a human.  After a run-in with a vicious gangster and drug peddler named Cain (Tom Noonan) that leaves him completely torn apart, OCP decides to take him in and reprogram him to be more PR-friendly as well as try and remove the more human parts of his personality. 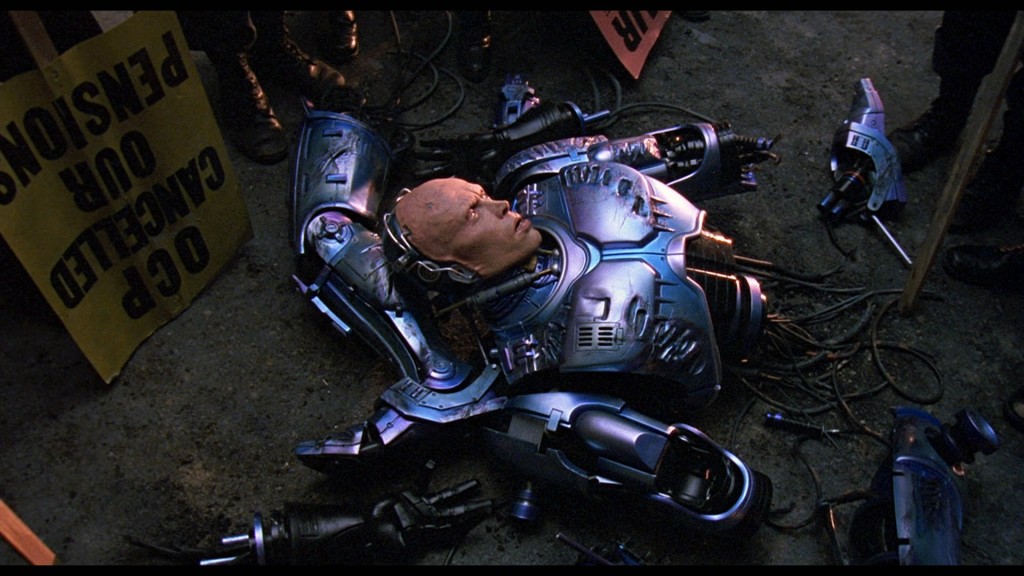 This comedic interlude of a confused Robocop not dealing well with his new programming (more on that later) lasts only a short time before he reboots himself and gets revenge on the evil Cain.  OCP, who is still working on a new Robocop program (self-referentially named “Robocop 2”) decides to take Cain’s brain and put it in a new, superior robotic body.  Unfortunately, Cain is a maniac who is still addicted to a drug called “nuke” and wants revenge on his fellow gang members who left him for dead.

Cain’s child sidekick Hob (Gabriel Damon), has taken over the gang and is in the process of bailing out Detroit in order to take over the whole city.  This is in light of recent moves by OCP to force the city to declare bankruptcy so the company can buy it outright.  Since OCP owns Cain-Bot, they send him to break-up a meeting between Hob and the mayor where his evil robot brain goes a little nutso and kills everyone. 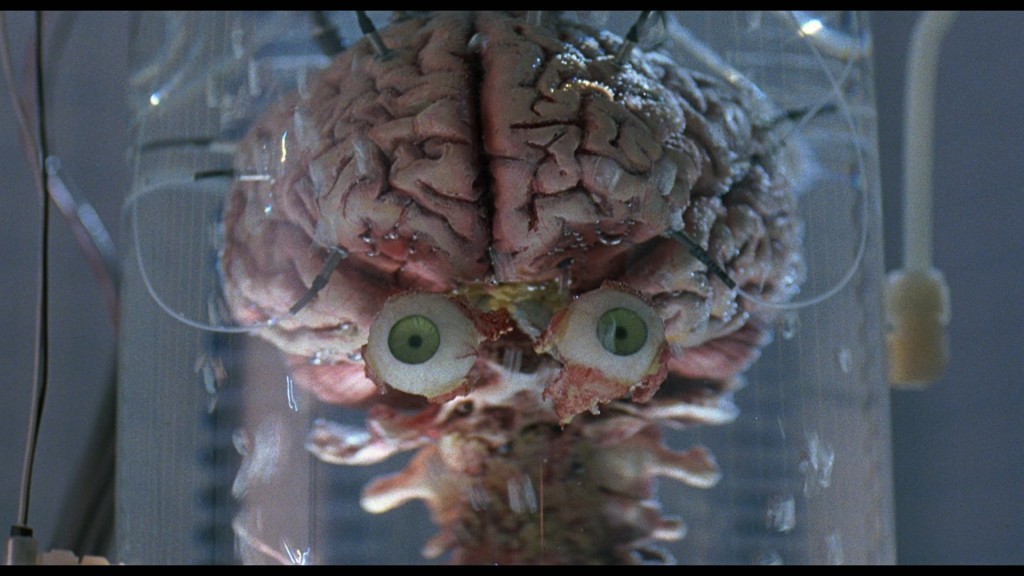 It is from this crime scene that Robocop is able to track Cain-Bot to OCP and engage in a climactic battle.  Of course, Murphy doesn’t simply “kill” his replacement in cold blood.  Luckily he shows up right after the robot goes crazy again because he’s craving some nuke.

Writer Frank Miller (who also cameos as a chemist making new types of nuke), creates a really wild world in Detroit reminiscent of the dystopias seen in some of this other futuristic works like “Ronin” and “The Dark Knight Returns”.  In addition to a bunch of Little League gangsters, there is an extended sequence where a nearly homeless woman’s purse is stolen by a guy who is then beaten up and robbed by a group of hookers (Frank Miller’s favorite demographic) who then proceed to pass by several in-progress beatings and an explosive, drug-fueled gun store robbery.  Finally Robocop shows up, which starts me thinking that he’s not as efficient as the first movie made him out to be.

In full Miller fashion even Verhoeven’s social commentary is recreated in increasingly less subtle ways.  That being said, some of the television commercials still have their moments.  An OCP ad where a businessman commits suicide after using an inferior communications company is all the right kinds of dark.  Less clever is the commercial for Sunblock 5000, which is the only way to safely go tanning now that the ozone layer has fully depleted.  While it’s an obvious joke and clearly doesn’t make sense considering much of the movie itself takes place outdoors in the daytime, the image of a painted woman laying out with the disclaimer “Frequent Use Will Cause Skin Cancer” elicited a chuckle from me. 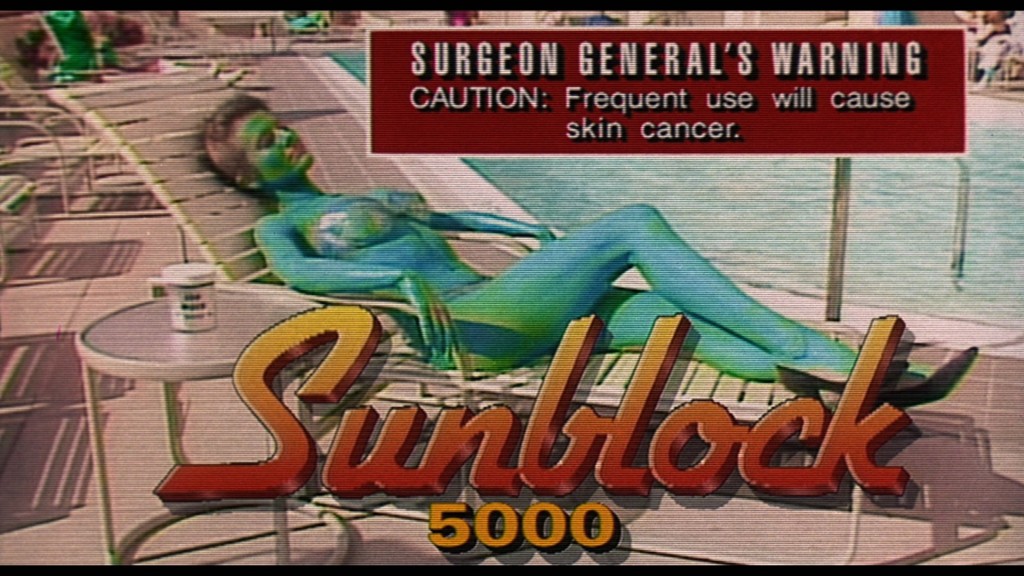 Director Irvin Kershner keeps Miller’s adolescent violence, but manages to still make it fun and well-paced within the context of the movie.  He takes Miller’s out-there screenplay and creates a visual world of live-action comic book mayhem.  Robocop 2 may not be as visceral an action film as the original Robocop but, a few silly sound effects aside, it manages to match the go-for-broke bloody audacity.  Part of this different feel is achieved through a campier tone, but more effectively through the stylized cinematography and set design.  Instead of the cold steel and real-world sets of the original, this sequel is filled with a larger than life caricature of a “gritty” city filled with neon blues and pinks. 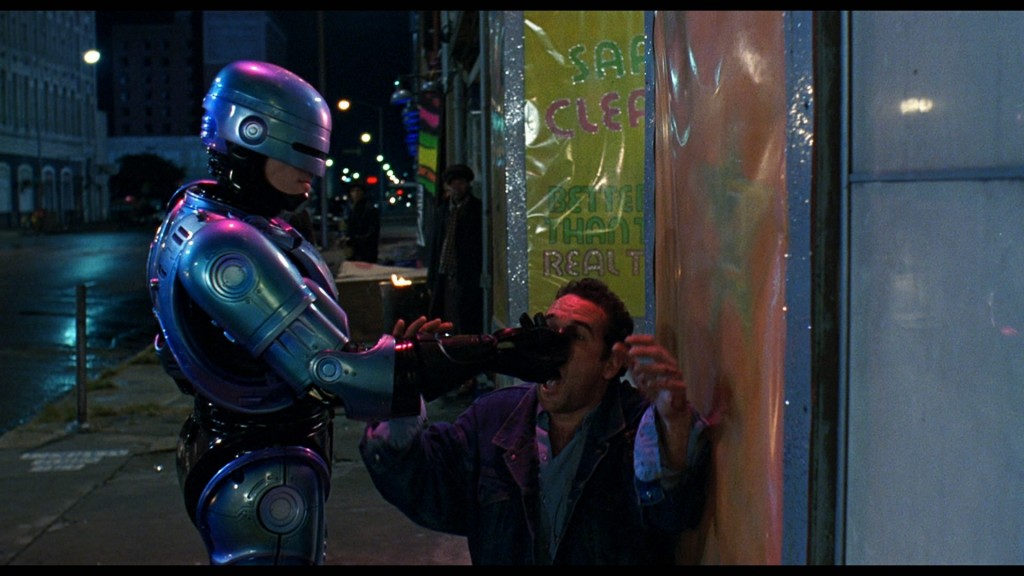 For the life of me, I can’t figure out why b-movies feel the need to be so complicated.  Like the previous cyborg-themed entry, The Eliminators, Robocop 2 manages to throw-in plot elements that distract instead of add to the story about a robot shooting things.  These include the well-meaning but corrupt mayor trying to avoid the entire city of Detroit being purchased by OCP, nuke running rampant on the streets, OCP attempting to deprogram the current Robocop of his human elements, an entirely new Robocop program spearheaded by a new employee, and a vicious gang with its own interpersonal difficulties led by the immoral Cain.  The only upside is that the cavalcade of actors (Felton Perry returning as Johnson, Willard E. Pugh as the mayor, and even Tom Noonan) are having a pretty good time with the crazy material. 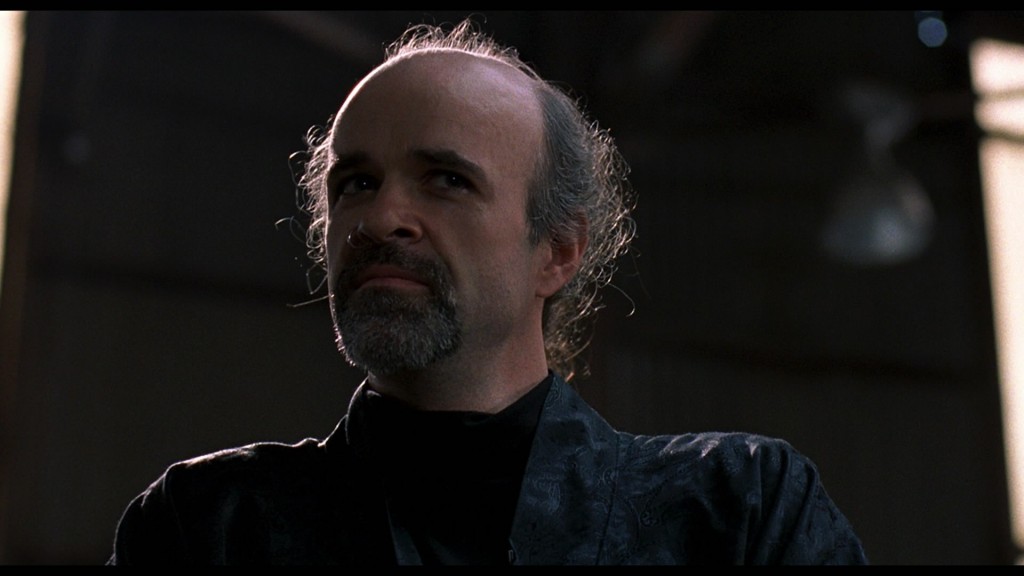 The issue isn’t that it’s too much to handle as a viewer, but that these elements work against, instead of with each other.  They begin to explore ideas of Murphy’s humanity and how he relates to his old life, but immediately drop them to make way for cramming in unnecessary plot details.  And while the idea of Detroit’s bankruptcy is eerily prescient, the overall story would have played out exactly the same without it.  It is little things like this that tend to separate entertaining films from truly “good” genre fare.

Give the audience a Robocop who shoots people with a giant gun and has to simultaneously fight the crime of Detroit and the corruption of its authority figures.  Put it in a basic three-act structure and highlight the action setpieces and cool special effects.  Say some interesting things about society and/or the human condition in the process if that’s your bag.  Don’t insert plot threads that go nowhere or redundant characters.  This isn’t a sprawling epic.  It’s Robocop 2.

Outside of the fake commercials, Robocop 2 also manages to double down on the satirical humor of its predecessor in other ways with mixed results.  However, highlighting the idea of Robocop as more “product” than “living weapon” is one of the more hilarious and unique ideas that Miller and Kershner chose to explore here.  After the human side of Alex Murphy starts to bubble up more and more to the surface, OCP tries to make Robocop more controllable.  The laugh-out-loud focus group scene has random people at a conference table positing “Why doesn’t he ever talk about the environment?”

Eventually, they reprogram him with an endless list of directives that practically cripples him.  Robocop starts to speak in nonsensical analogies, tries to arrest dead men, shoots at people for minor infractions like smoking, and sometimes just stands there as crime runs rampant.  The whole plot point is a clever little dig at corporate groupthink and manages to feel in-line with the Robocop tone set up by Verhoeven. 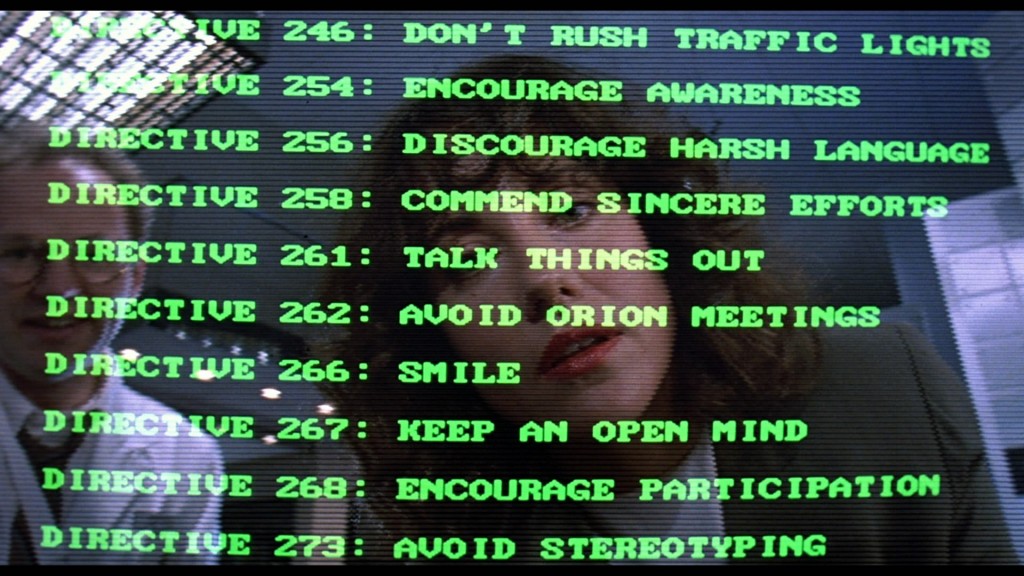 All in all, a good portion of this movie feels like a pointless rehash of the first one.  While there are no direct references to Robocop, a lot of the templates for the action scenes, as well as all of the set-up at OCP, feel recycled.  Partly because of these shortcuts, the pacing feels considerably off-kilter.  There is inordinate focus on the introduction of several new characters: like Cain’s drug addicted girlfriend, Angie, and his murderously prepubescent sidekick, Hob.  As a result, Robocop and Nancy Allen’s character of Anne Lewis get short shrift. 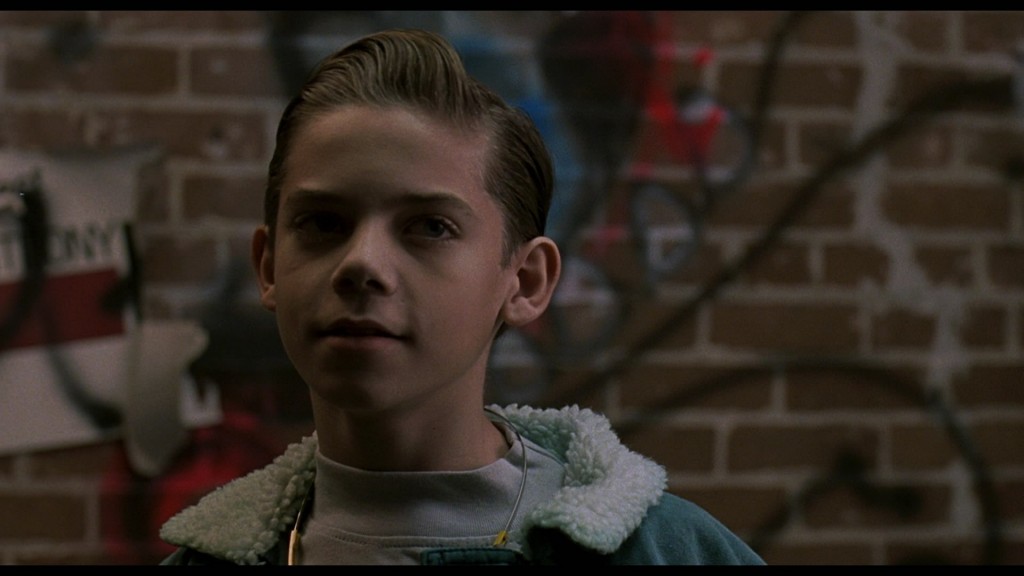 In fact, Nancy Allen does all the heavy-lifting in a lot of the confrontations yet is barely in the movie.  When Robocop is temporarily indisposed she rams Cain-Bot into a wall with a truck.  Later she distracts the evil mechanical monster with some nuke in order to give her friend the upper hand.  If her character wasn’t a holdover from Robocop, I’d assume her name was Lieutenant Deus Ex Machina.  This isn’t simply because she saves the day.  From a narrative standpoint, she literally comes out of nowhere to do it.

Yes, actually!  It reminded me a touch of the pure 90’s straight-to-video action movies like the Darkman sequels (but with some competence behind the camera, and a sorely needed budget).  Robocop 2 may not stand up to the first film, but it successfully takes the inherently goofy premise and goes into full b-movie territory. 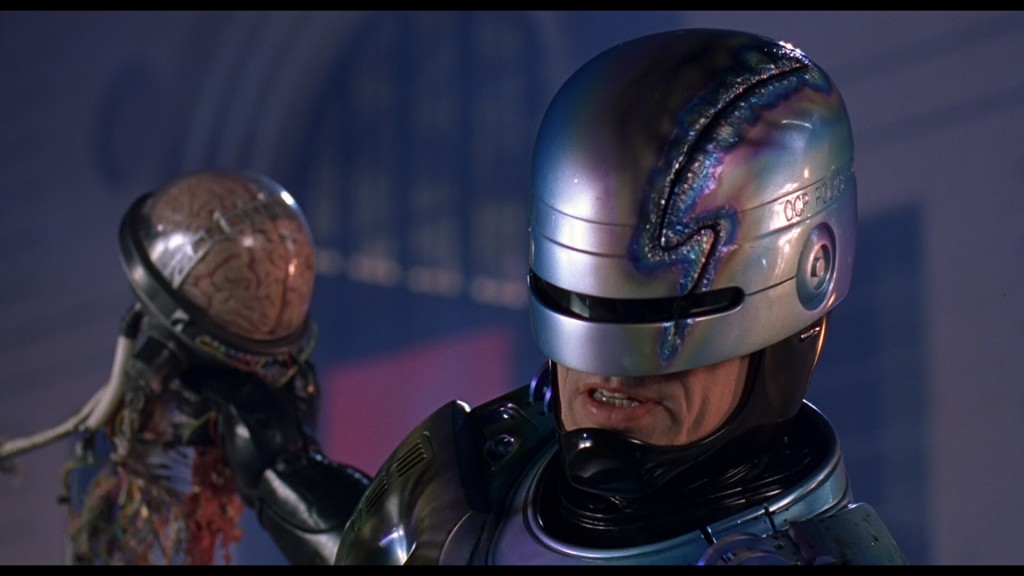 The key to enjoying it at all is pretending that it isn’t a sequel to one of the most amazing movies of all time.  While they are both bitingly funny, exciting, and completely bonkers, Robocop 2 merely goes in another direction.  In other words, it’s not bad… just different. It’s almost a shame that Robocop 3 totally derailed the idea of making this a film series with regular entries and re-imaginings.  In a world of franchises and reboots, Robocop is simply too iconic to only exist in one great movie, a pretty good movie, and a bunch of incomprehensible crap.