Why Did I Watch ‘Arena’? Because it’s about some dude punching aliens, that’s why.

I saw a pretty cool sci-fi 4-pack on Amazon for $6.86, so I picked it up.  I had seen a trailer for Arena previously that looked like it had some great make-up effects, so out of the four films I was mostly excited for this one.  Although, I am sure the other three will warrant write-ups sometime in the future as well.

Watched this with a bunch of friends and some beers.  To be honest, it was the second part to a double feature with previous entry Hard Ticket to Hawaii… so we were pretty deep into the beers at that point.  I’ll admit I had to passively rewatch it to remember everything that happened.  But I do remember that all of us mostly enjoyed the movie at the time.

From the filmmakers who brought you Demonic Toys, Arena is basically every cliché boxing/fighting film you have ever seen.  In the tradition of Robot Jox, a likeable but mostly bland guy works his way up in a vaguely dystopian society to earn the right to compete in some nondescript gladiatorial games. 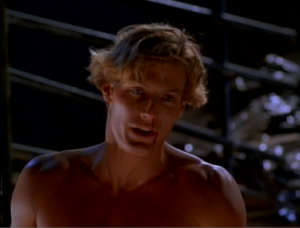 After a handful of various machinations and misunderstandings they find themselves in debt to villainous arena-fighting business maven Rogor (Deep Space Nine’s Marc Alaimo) and his sidekick Ferret (Deep Space Nine’s Armin Shimerman).  Through some slightly clunky exposition it’s made clear that Armstrong used to fight in some human matches and respects what arena-fighting used to be before Rogor got his greasy paws on it.  His natural skill and passion leads him to be recruited by manager Quinn (Babylon 5’s Claudia Christian).  It’s made clear roughly fifteen times that the mere existence of Armstrong’s career is a risky move since no human has competed in the fights in at least a generation.  It’s not clear why the race of the fighter should matter though… because in either the hokiest or most brilliant plot device in “simplistic science fiction explanation” history, “handicap rays” are projected on both fighters so that their strength is more or less equal.  Basically, the world of Arena doesn’t have weight classes.

Even after Armstrong’s debt is paid off, Rogor does not enjoy the speed with which the resilient human moves up in the ranks so he tries to sabotage him several times throughout the film.  In addition to being about a human fighting aggressive bull-humanoids, Armstrong’s everyman character is fighting the corrupt arena-fighting establishment. 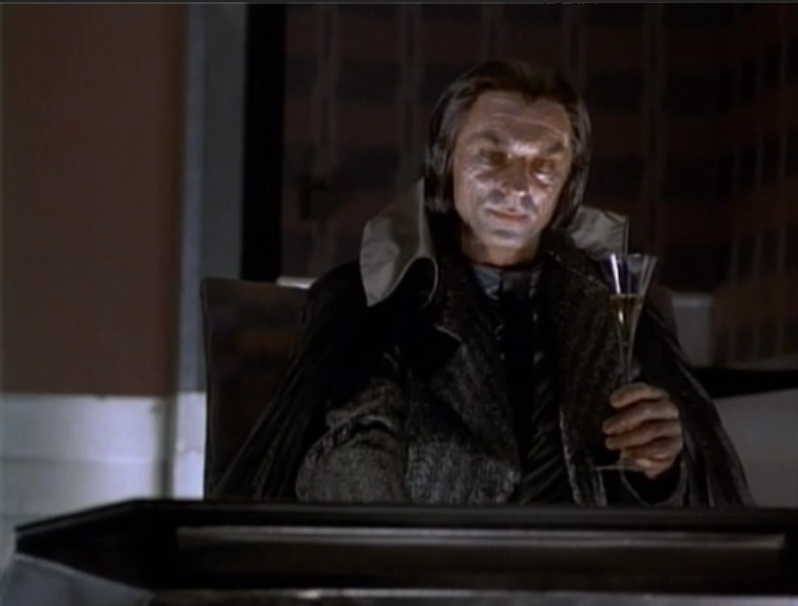 To that point, there are some rather interesting portrayals of authority-sanctioned income inequality and space station homelessness that act as pretty effective storytelling shorthand for our unlikely hero’s struggle.  It also helps to dramatize his fights when the “common” man/woman/alien cheers for Armstrong as an extension of their symbolic wish fulfillment for better lives.

As is often the case, the villains are far more interesting than the main characters.  Alaimo is appropriately charming, yet menacing and Shimerman is wonderfully sniveling and self-serving.  Not to say there is anything wrong with either Satterfield’s or Camp’s performance.  Satterfield does what he can with a fairly vanilla doofus of a character and Camp does his best gravelly Burgess Meredith in Rocky impression  to service some silly comic relief.  The audience should be expecting to watch an underdog triumph in a series of (admittedly) awkwardly staged fights against a bunch of wacky-looking aliens… and that’s what happens

In his arena debut, Armstrong goes head-to-head with a giant, unwieldy monster seemingly modeled after one of my least favorite animals; the cave cricket.  The beast is brought to life with some remarkable puppetry/animatronics that truly raise Arena to the next level of sci-fi wildness. 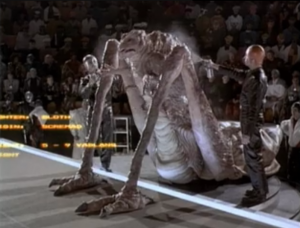 It’s the highlight of the film and the filmmakers knew it, as the imagery is used in the trailer, the poster, the VHS/DVD cover art, etc.  As a result, every opponent is almost a letdown after the first fight.  However, it’s really a testament to how far the filmmakers behind Arena stretched the budget and how committed they were to the special effects.  Every alien is at least a little exciting, which is probably 90% of the reason I would say I enjoyed this film.

There is something charming about the craft and seriousness afforded to a fairly goofy movie that is clearly meant to appeal to all ages and otherwise doesn’t take itself too seriously.  Each setpiece may not be suspenseful or even believable, but overall, Arena is legitimately engaging and fun.  It just plain works within the genres of sports, adventure, and science fiction.  Hell, it even manages to add a little heart in there.

Lowpoint?
Throughout the entire movie, Arena is a little bit basic and predictable.  Case in point:

Our hero is initially reluctant, but forced into the competitive world of his past in order to defeat a greater evil.  He struggles at first, but ultimately finds his niche as a cult following rallies around him.  A montage of greater successes ensues, interspersed with some slight interpersonal conflict amongst the protagonists. 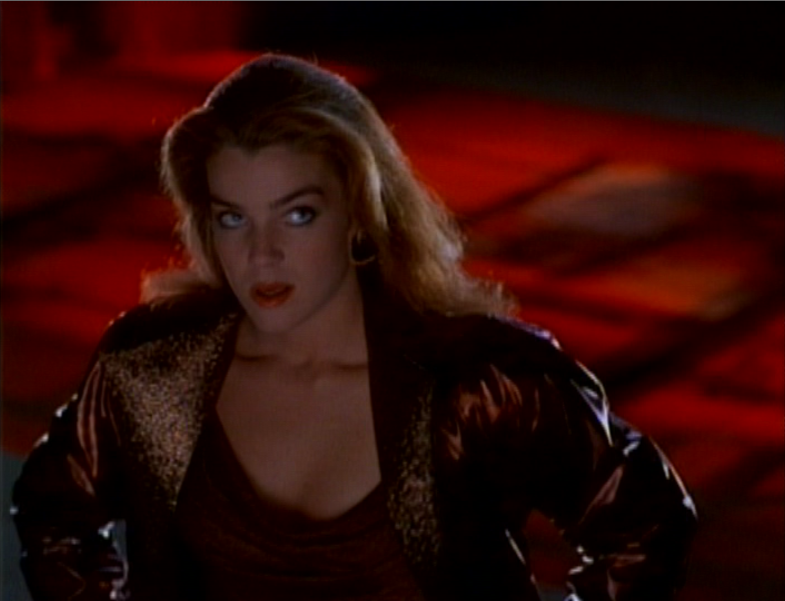 The villain cheats, but the hero ultimately finds it in him to win with the help of his friends and the moving advice of a wise older mentor.  Also, there is an ignored romantic interest within the group who finally finds herself appreciated leading up to and throughout the climax.

As you can see, it hits all the expected story and character beats like clockwork.  More importantly, it’s hard to ignore the hackneyed story when the movie doesn’t really do anything new as far as the (practically nonexistent) fight choreography is concerned either.

However, at a certain point, “formulaic” can be more lazy as a critique than the works it’s attempting to criticize.  If a movie has something to offer like fun creature design and solid characterization, a paint-by-numbers story is simply a shortcut to a fulfilling yarn.  At the end of the day it’s effective, economical, and gives each member of the cast something significant to do within the larger narrative.

It’s not a life-changing movie, but between the straightforward plot and retro special effects there’s a lot to like here.  There might be an overabundance of aliens that look like fish, but I guess I’m just a sucker for good make-up.  Additionally, if you’re a Star Trek fan, you get the opportunity to witness early incarnations of Alaimo and Shimerman’s respective performances of Gul Dukat and Quark from Star Trek. 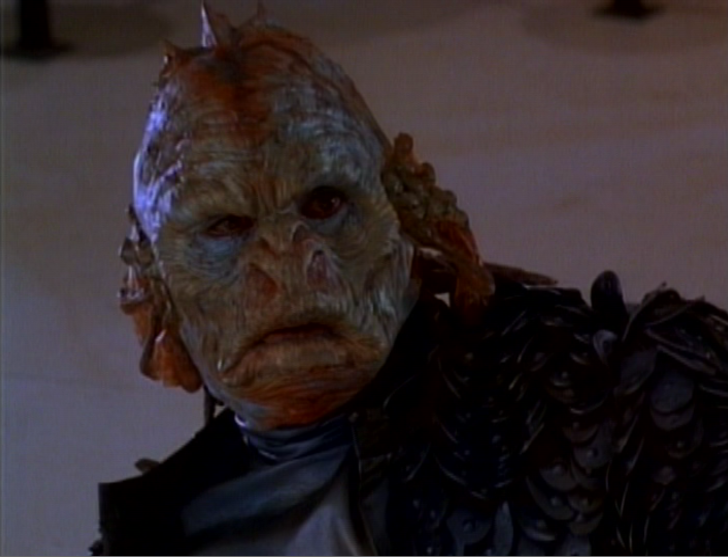 I compared it to Robot Jox above because of the futuristic gladiator story, but it’s important to note that both films are produced by Charles Band’s Empire International Pictures.  You might recognize this being the early version of the company’s later incarnation: Full Moon Entertainment (who was behind previous “Why Did I Watch This?” entry, Dollman).  There was a whole movement in the 80’s that produced quite a few duds, but also a ton of solid movies.  The films may not aspire to anything above serviceable genre fare, but they succeeded with flying colors as a result (see also: Golan-Globus films).  There are two reasons I started to write this feature for AAG: Ridiculous “So Bad, It’s Good” fare  and admirable entries into the canon of low-budget b-movies like this.  So yes, Arena is definitely worth checking out.