Why Did I Watch Bangkok Knockout?: Can Expertly Choreographed Action Save a Terribly Written Film?

Honestly?  I have no idea why I watched this!  Bangkok Knockout was expiring on Netflix streaming and isn’t available via dvd.  I fired up the browser window on reflex so the film wouldn’t be lost to the ether.  But why was it in my queue in the first place?  Was it recommended to me by a person or some algorithm on Netflix’s site?  I have no idea… but if not for seeing the expiration notice come up, I’m pretty sure I never would have considered it.

I woke up early and grabbed my fiancée’s iPad while she slept on a Sunday morning.  I was able to get in the whole movie before football!

The tale begins with a martial arts/stunt team participating in a vague contest.  They spar other competing groups, go through obstacles, and are ultimately judged by an unidentified group of people.   Right off the bat, it’s pretty hard not to roll your eyes at the manipulative cheesefest that is the core group of characters.  This is a team of aggressively likable Saved By the Bell-esque teenagers with a lot of fighting skill and borderline pathological optimism.  When they win the tournament (or whatever it is) they go to a sitdown dinner to celebrate.

A female character, Joy, is unwilling to stay because she has to finish her homework.  All the characters let out a sustained “Awwwww!!!” in unison.  It’s sickeningly sweet.

Along with a taxi driver, a flamboyant musician, and Joy’s father, the team wakes up the next morning with wicked hangovers as they were apparently drugged the night before.  Their cars are gone, the restaurant’s gone, and civilization seems far away.  It turns out, the competition was a front.  Instead of their prize, the stunt team is subjected to a deathmatch against a group of assassins while a cadre of rich villains watches on closed circuit television and places bets.

To be honest, our heroes really should have seen this double-cross coming. They were simply promised a job with the improbably titled “Head of the Department of Performing Arts in Hollywood”.  Is this a governmental position?  Is it voted on or appointed like one of our czars?  When they meet this “department head” are they automatically being put on a project?  In the film’s defense, by making the main characters so cheerful and naive it actually makes a little bit of sense that they wouldn’t have asked these types of logical questions either.

If the central conceit is hard to swallow, wait until you hear the rules for the gambling portion.  There is a $5,000 minimum (which they later disregard without explanation) on each bet… “and I don’t have to tell you what the maximum is.”  I assume that quote means “there is no maximum”, but who knows?  The sinister MC of this gambling cabal explains a few of the matches in a way that not only implies that the screenwriters have never made a sports bet before, but also that they’ve never heard of the elusive concept we call “math”.  For example: two “good guys” are ambushed by two “bad guys” (roughly the level of characterization we’re dealing with here).  Apparently if you wanted to bet $20,000 on the outcome of both men winning, you win $80,000.  If you bet $20,000 on any one of the good guys to win, you win $30,000.  If you bet $30,000 that both will lose, you win $10,000.

I’ve been told I can be, uh, particular when encountering mathematical inaccuracies.  These random payouts though… it’s like they were picked out of a hat.  The gambling aspects are so senseless, I think they would be inexplicably frustrating to most people.

It should be noted that all of these sequences are performed in English, as the handler for these high rollers is an American.  The whole portion takes place on one cheap set and the acting is so stilted that instinctively the tone felt dramatically different than the complex action beats of the rest of the film.  To be honest, I thought this whole framing device was created independently to try and appeal to an English-language audience.  Surprisingly enough, the climax actually involves the heroes breaking out of their deathmatch warehouse and taking down the gamblers in their trailer.  Despite being woefully incongruous, it’s clear that the gambling subplot was part of the movie from the get-go.

To up the stakes, the villains kidnap an elderly matriarch that cooks everyone food and just hangs out with the group for some reason.  Then everyone fights some more.  Wait, why does everyone on the stunt team call her “mom” if none of them are explicitly blood- related?  Is she the mother of one of the characters?  Does she work at an orphanage where they all presumably met?  Why don’t they explain how this group together in some of the all too short flashbacks?  Speaking of which, why do the flashbacks that give our characters their motivation happen so late in the game?  The main character (Pod) faces off with a villain named Pom and seconds before the confrontation we’re treated to a quick flashback showing that they already knew each other and have fought for the love of Joy in the past.   It’s so rushed and arbitrary that I had to check and make sure that Bangkok Knockout wasn’t a sequel or spin-off to something that actually did the work to set up the character relationships.  This romantic subplot is a textbook case of “Let’s invent some emotional stakes!”  The filmmakers just throw “storytelling” on the screen and hope it equals “a story”.   Also, did they really name one character “Pom” and another one “Pod”?  Imagine a world where Rocky Balboa faced off against the world champion, Ricky Creed.  TV Announcer: “And Ricky has Rocky against the ropes!  But Rocky escapes and gets a punishing hit on Ricky!”  That’s confusing! 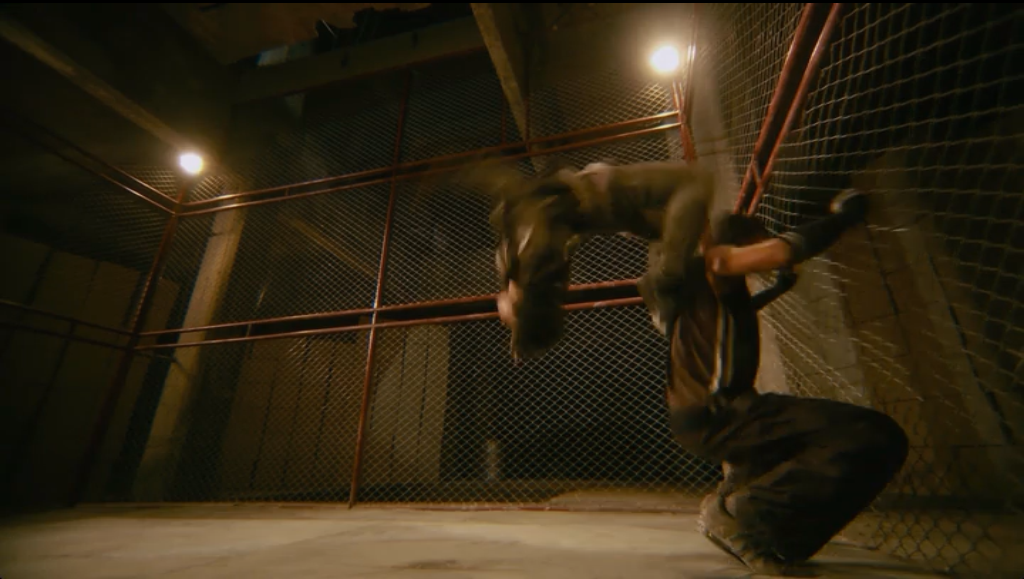 Jeez, I can’t even get two sentences into the plot without going off on some confused tangent, ultimately devolving into a torn heap, bound and broken on the floor.

To be fair, complaining about the story seems to be not only a fruitless quest, but a self-defeating one as well.  All you need is a series of unnecessary excuses to get some martial artists to do some flips and go to town on each other.  Long story short: after a series of fights with characters you are unlikely to remember, the good guys get out and defeat the masterminds behind the whole operation.  The end.  This is all accomplished by a ridiculous series of flips, kicks, and jumps.  While there may have been some huge mistakes in the elements of story and character, I’ll admit that bringing the characters to the deathmatch against their will allowed for a discernible sense of urgency that almost made up for it.

I have to admit… the action and fight scenes in Bangkok Knockout are out of this world.  Not only is the athleticism often breathtaking, but each fight’s choreography is also so compelling and unique that each character’s different fighting styles end up being the most defining traits. 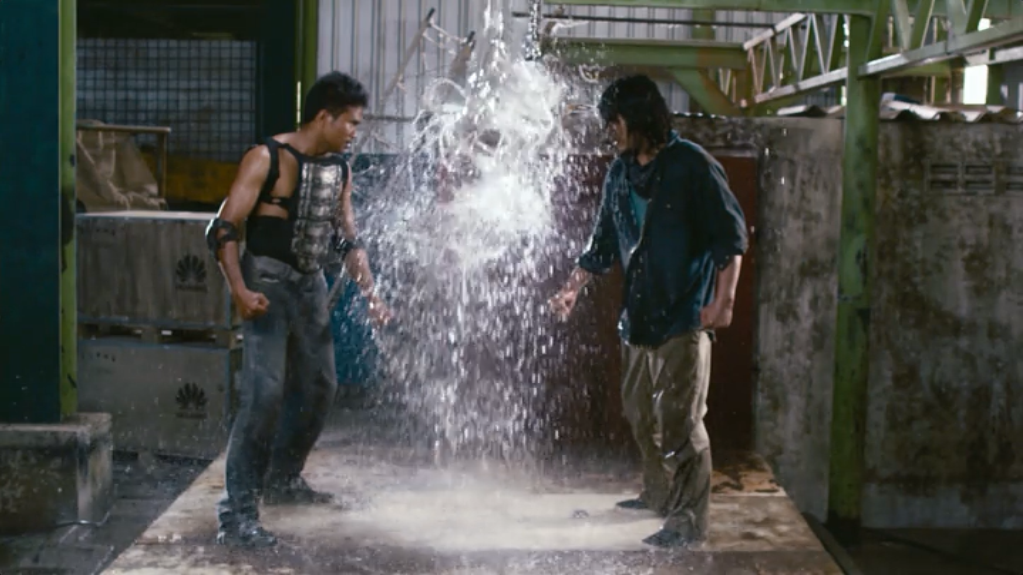 I would even say this movie compares favorably to the work of Tony Jaa (The Protector, Ong Bak) and Gareth Evans (The Raid: Redemption, The Raid 2).  That’s not a coincidence.  Director Panna Rittikrai (who tragically passed away this summer) was the action supervisor for the dynamic Chocolate director/action supervisor for the superb and surprising Ong Bak 2.

Rittikrai provides us with a guy fighting three other guys on dirtbikes, a villain whose main weapon is a car he drives into people, a plethora of brutal beatings, and the visual panache to make it all worth while.  And isn’t that what these types of movies are about?  Unlike say, Bloodfist, the camerawork highlights the artistry of both the fighters and the choreography in a way that rivals the best of the genre.

I already admitted that the story was so hastily put together to seem amateurish… but that can be forgiven since the crux of the film should rely on stunts, not story.  So what precisely is the lowpoint?  How about the rampant homophobia?  First: the overtly theatrical musician.  He’s a chubby and effete cartoon who spends the whole film prancing around, relying on everyone else to save him.  He smirks and mugs in an elitist, but flirtatious way that was infuriating.  He keeps saying things like “so classic!” as if getting kidnapped and forced to fight in empty warehouses is as commonplace as losing his keys.  The scene where he gives up a hiding group of non-fighters’ position to a crazed murderer by farting borders on being a dark twist on the reliable flatulence joke… but not quite.  The filmmakers legitimately created the most obnoxious comic relief in recent memory.

While the musician character is portrayed as an effeminate wuss, it’s never outright said that he is supposed to be gay.  To that point, you could argue that I’m being unfair and using cultural stereotypes to pepper my view of the character.  But then they introduce the transvestite villain who attempts to seduce men against their will while he fights.  Most of the hits make him moan with pleasure in an attempt to disturb.  And it does disturb, but not for the contemptible way the filmmakers are trying to sexually agitate straight men.  The movie doesn’t treat the character as a lowlife.  In fact its his sexual orientation that’s portrayed as villainous.

Before the team is drugged, he is disguised as a waiter in the restaurant where everyone is celebrating.  He makes eyes at one of the main characters which sends our “good guy” into such a rage it threatens to derail the whole party.  The “no homo” hero doesn’t get any comeuppance for his bigotry…  he just gets accosted by the gay character later and gets the chance to confirm his prejudices and beat the holy hell out of him.  Worst of all, the whole thing is despicably played for laughs.

Unfortunately,  I have to recommend this movie to any fan of martial arts.  Despite the incredibly discouraging aspects, this is a film about action first and foremost.  It literally features a group of (practically) nameless stuntmen fighting to the death… and that’s it.  From the opening fight of the deathmatch where one team leaps across a chasm to collide with another in midair to the death-defying climax which takes place underneath a moving tractor trailer, Rittikrai is concerned with providing clear and over-the-top compositions which highlight hard-hitting fight scenes.

The pen may be mightier than the sword, but words certainly don’t have the same power as kicks.  It isn’t really doing the film justice to attempt to describe a fight scene with prose.  Check out the clip below which cuts between the best (a wuxia inspired cagematch) and the worst (a fight with the evil gay man) of the movie and decide for yourself…

All images courtesy of Na Film