Why Did I Watch ‘High School Hellcats?’ – ‘Mean Girls’ with Murder

I have always been a little intrigued by the “good teen goes bad” alarmist tales of the 1950’s. The only ones I’m personally familiar with, however, are cult classic Reefer Madness and Robert Altman’s debut The Delinquents (starring The Trial of Billy Jack’s own Tom Laughlin!)

The over-the-top trouble that plagues these innocent kids has a lot of potential as a time capsule of the culture of worrying parents in the Fifties as well as a pretty great source for unintentional hilarity.  American International Pictures produced a number of these types of teen exploitation films aimed squarely at the drive-in audience and later heralded as Hays Code-safe forerunners of the “grindhouse” movement of the late 60’s.

More importantly, I was oddly eager to be covering my first “black and white” feature for Action A Go Go!

This was another one of those Netflix movies that you can’t get via DVD-By-Mail and was about to expire on Instant Watch.  My fiancée watched High School Hellcats with me due to the same curiosity that caused me to cover it for this feature.

Exceptionally bland Joyce Martin (Yvonne Lime) is a pretty, girl-next-door type who is a new student at the local all-female high school.  Or actually, it’s probably a co-ed high school, but the only class we see is biology which is apparently segregated by gender.  It’s not entirely clear, but we do see some boys in “the quad”.  Regardless of how much testosterone there is in the cafeteria, on her first day, she runs afoul of a school gang called The Hellcats by answering a question from the teacher correctly.  Gang leader Connie (Jana Lund) concocts her revenge by letting Joyce know that Friday is the day that all the girls wear “slacks”.  Presumably because the audience couldn’t see the color pink on black and white film. 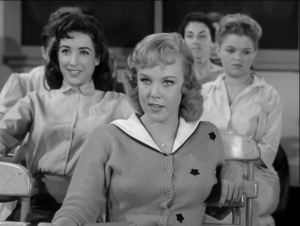 The fact that she’s been there only a day and that slacks are strictly against dress code doesn’t tip off Joyce that she probably should not be complying to the request.  Let alone that she is taking this advice from a Debi Mazar-looking sass machine who just yelled at her for participating in class.  However, when Joyce refuses to rat out Connie after being admonished for her clothing, the gang members see a spark of rebelliousness and try to get her involved in their misbehavior.  Referring to the slacks as step one of her initiation, they make Joyce ask a certain boy to a house party.  She’s not entirely happy with this since she’s a 50’s stereotype who just hit it off with a handsome soda jerk (Brett Halsey) at the local malt shop.  However, despite her goody two-shoes personality, she is desperate for the acceptance of her peers and goes through the motions of joining The Hellcats.

As the movie progresses, Joyce fully becomes part of the “bad crowd”.  She wears too much make-up, pretends to steal stuff, gets tricked into consuming alcohol at their abandoned movie theatre hangout, and goes to make-out parties at inhabited houses while the owners are on vacation. 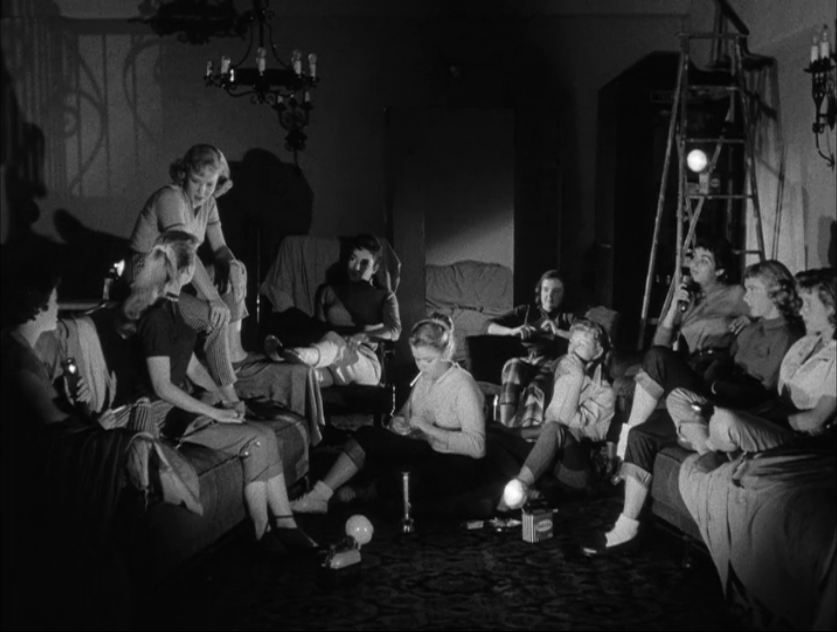 It’s at this final party that tragedy strikes.  During their thoroughly rapey game that involves turning off the lights and having people try to guess who’s groping them, Connie falls down the steps to the basement and dies!  Dolly (Susanne Sidney) takes over The Hellcats and things take a turn for the worse with Joyce.

See… as second-in-command, Dolly was clearly jealous of how Joyce had ingratiated herself to Connie, the unappreciative leader.  Now, Dolly is eager to pin the death on the new girl by whatever means necessary.  As police start investigating, Joyce starts to break under the pressure and feels more and more trapped by her membership with the gang.  Her popularity depends on her not giving any information about the night of Connie’s death, but her desire to do good leaves her confused and upset throughout the ordeal.

While the “troublemakers” of High School Hellcats don’t act with a whole lot of teeth (over-applying make-up and wearing slacks aren’t exactly troubles that afflict today’s youth), the filmmakers never quite try to paint The Hellcats as “bad girls” or their idea of fun as exceptionally debaucherous. 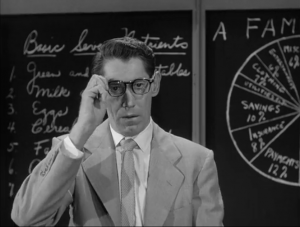 The “slacks” issue seems particularly harmless… and almost realistic in its depiction of peer pressure, mean-spirited yet innocent pranks, and arbitrary rules that warrant rebellion.  I don’t think that’s just my modern sensibility underselling the eyebrow-raising conservatism of the 1950’s.  One could argue that this is a movie for kids of the Fifties instead of an alarmist fantasy for parents.  It condemns, but also accepts that kids will get into trouble in a way similar to 1987’s much different (but still applicable) The Lost Boys.  The idea of setting up Dolly as the true “villain” sort of exonerates the rest of the mischievous teens from excessive judgment, making this probably more appealing to kids at the time.  When you’re a teenager there is nothing more lame than a piece of entertainment that teaches the same “be good and don’t party” lessons as your parents. 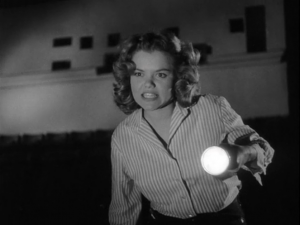 It’s an unexpectedly interesting story.  The fact that the second most important character dies about halfway through adds some fun intrigue to the narrative.  It’s not exactly a surprise when they reveal what actually happened to Connie and why, but still turned out more entertaining than your average tale about the newly post-pubescent.  It seemed, in fact, to be a coming of age story about Joyce more than anything else.   That being said, the climax still presents a violent showdown in the abandoned theatre that is effective in its simplicity.

I may have mentioned as a “Highlight” that this film is really all about Joyce… but it’s kind of a shame because she is such a moist, unappealing lump of a character.  Hell, she almost succeeds in derailing the whole film.  Neither the writing, nor Lime’s performance succeed in selling the reason for this “good girl” to be so incessantly eager to join The Hellcats.  The older soda jerk is totally into her and he explains to her that the gang is bad news.  She has a pretty hip teacher as a mentor who also explains that hanging out with them is a lousy idea 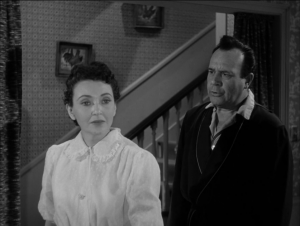 .  There was a lot of room (the movie has a running time of 69 minutes) to give Joyce a motivation for turning bad.  The closest thing we get is the abusive relationship with her parents.  When Joyce’s father sees her walking around in her nightie, he gets incredibly angry at her walking around the house like that and slaps her.  She doesn’t have any siblings and they weren’t expecting any company, so it seems that it could be played as a psychosexual hang-up of her father’s… but that’s probably going a little deep for this quick piece of Fifties fluff.

Yea, sure! My fiancée enjoyed it a tad more than I did, but it was a breezy little flick with a somewhat more interesting plot than your average “delinquent kid” story.  It’s really only recommendable if the viewer has some interest in the storied genre.

Like I said, I don’t have the most experience, so take my recommendation with a grain of salt.  I don’t know if Hot Rod Gang, Reform School Girl, Daddy-O are better movies, but this was entertaining enough to pique my interest.  As I am apt to say about many perfectly serviceable films, this one was solid (Jackson?)