Why Did I Watch ‘Knightriders?’: For Some Hard-Hitting, Motorcycle Action…?

Alone on a Saturday morning when I should have been golfing.  See, I overslept because the volume on my phone was all the way down.  Is that pertinent or interesting?  Does anyone even care about this section of Why Did I Watch This?

I have to admit up front that I expected something fairly similar to the completely wild New Gladiators, from fellow zombie auteur Lucio Fulci.  Be forewarned: This movie is nothing like that one. 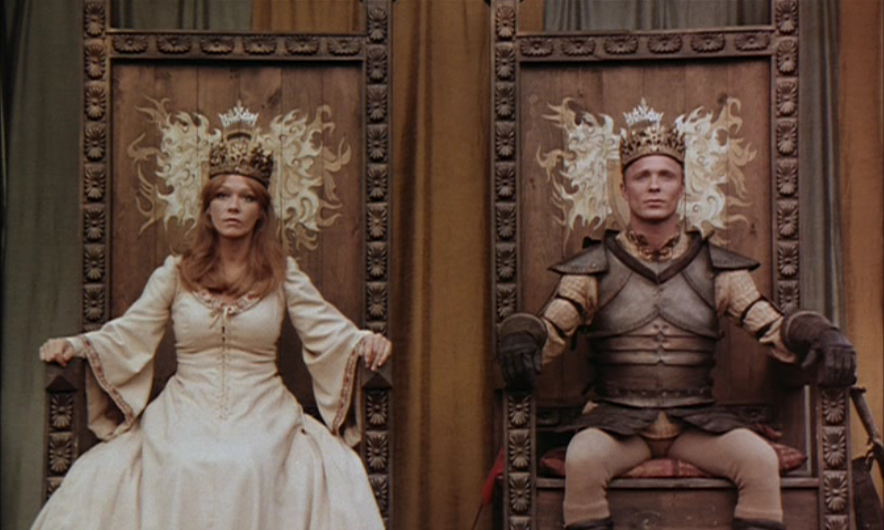 If you watched the Knightriders trailer above (I didn’t until I began writing this piece), you might have realized that it takes itself a bit more seriously.

In a much different way than previous entry Helldriver, Romero’s film almost defies description.  The movie begins as “King William” (aka Billy, played by Ed Harris) presides over a Renaissance Faire that is even-stranger-than-normal, as each day ends with jousting competitions which occur on motorcycles instead of horses.  Billy has recently been injured but insists on competing whenever it tickles his fancy.  Most of his gang of outcasts fear for his health and insist on protecting him as the jousting matches actually have stakes: If “King William” is unseated and forced to yield, the winner is able to take his crown. 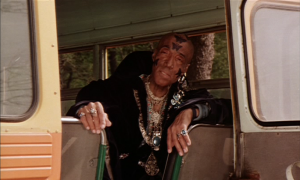 Besides his desire to fight injured, other signs of Billy’s instability are revealed over time.  He’s delusional, sometimes violent, and unsettlingly committed to his role as king.  He even seeks counsel from a magic-believing doctor named Merlin.

When a sheriff snoops around looking for a bribe, Billy refuses to pay off despite threats of “trouble” from the local law enforcement.  When the same sheriff later plants weed on one of the motorcycle mechanics, Billy insists on accompanying his loyal “subject” to the jailhouse and getting locked up as well.   It’s all for naught, though, since he just ends up being forced to watch the local cops beat his framed friend with nightsticks.  This sends Billy into a frenzy as he is carried out of police station, struggling to provoke the same brutality on himself for a mere shot at revenge.  So that’s the major conflict, correct?  Nope, the cops aren’t really what the movie is about.  They don’t show up again until nearly two hours of running time later when the corrupt sheriff gets his ass beat by Billy in a McDonald’s.

Hothead jouster Morgan (the perpetually shirtless Tom Savini) meets up with a promoter (played by Jurassic Park actor Martin Ferrero) and wants to sell out by performing at state fairs, doing interviews, and posing for weirdly sexual photoshoots. 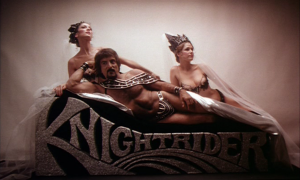 Billy is adamantly against this, so there is a schism between Savini who is seduced by the promise of bigger and better things and those who respect the purity about the art of ren faires.  The movie isn’t quite about about this familiar storyline either.

There are a couple of romances, a mysterious American Indian jouster who shows up one day, safety issues for spectators, interpersonal breakdowns, obsessive fans, people dealing with acceptance as they come to terms with their sexuality, alcoholism and abuse, and prescient dream sequences.  Knightriders is a big film with big ideas.  It’s an oddball drama, wild action, and several more conventional films all rolled into one.  In fact, the need for a story threatens to derail the lyrical experience of the film several times.  Luckily, Romero switches gears often enough that the audience is never truly lacking for something new.

The stuntwork is top-notch.  Romero lets the riders’ work speak for itself as they freely knock each other off their bikes and land in awkward, dangerous-looking positions.  The surprising 145-minute running time may be long, but not for want of action. 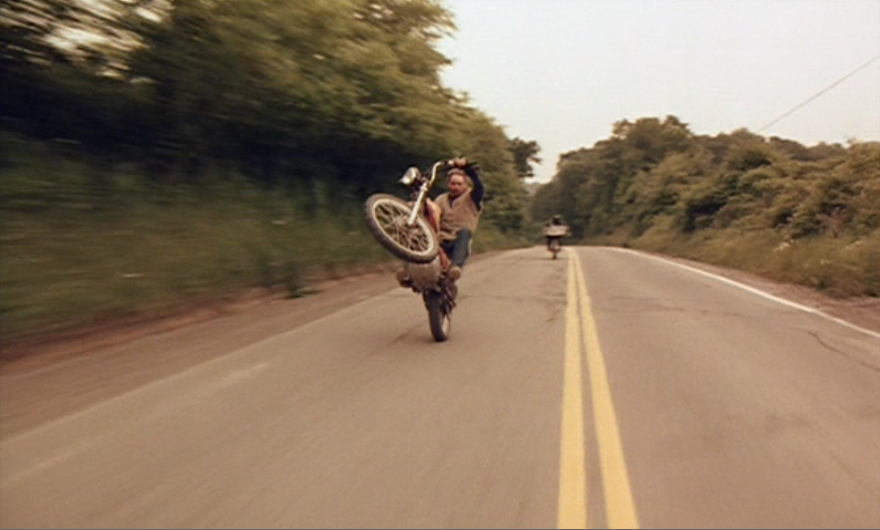 While Knightriders is ultimately a drama, there are enough fights, chases, and jousting mayhem that nobody should rightfully be disappointed if expecting a ridiculous b-movie about knights on motorcycles.  In fact, that that is exactly how I went into the movie and I ended up pleasantly surprised at how complete the parts in between the mayhem felt.
I will admit some of the action might not have made much sense.  Why, for instance, does a group of previously unmentioned, wannabe jousters show up to the show to cause a ruckus?  It’s a strange, unexplained conflict.  But the overall feel of the movie prepares the audience for such unpredictability.  Most of its success as an action movie falls to the great work of the stunt doubles, stunt coordinators, and actors in conveying a number of visceral blows and crashes.

At times the acting does feel a bit stilted (barring the gutsy performance from newcomer at the time, Ed Harris).  In its defense, there are moments (like a lengthy campfire scene) where some of the amateurish deliveries help give the feel of an improvised and conversational tone.   This really serves the purposes of the hangout movie hiding within all the violent jousting and C, D, & E plots.  But more often than not, it gave many of the scenes a slower pace that was less than favorable for the fairly long film.

Knightriders is over-stuffed, has virtually no true conflict, and exists in a poorly defined world.  Despite all that… I think it is a fantastic film.  Maybe over multiple viewings its unfocused narrative would prove exhausting while its overall strangeness would lose its appeal.  However, as a singular experience, this movie is a fantastic ride with ambitious goals.  It never feels that Romero let it get away from him and I couldn’t imagine one of the multitudes of plotlines or characters being cut out. 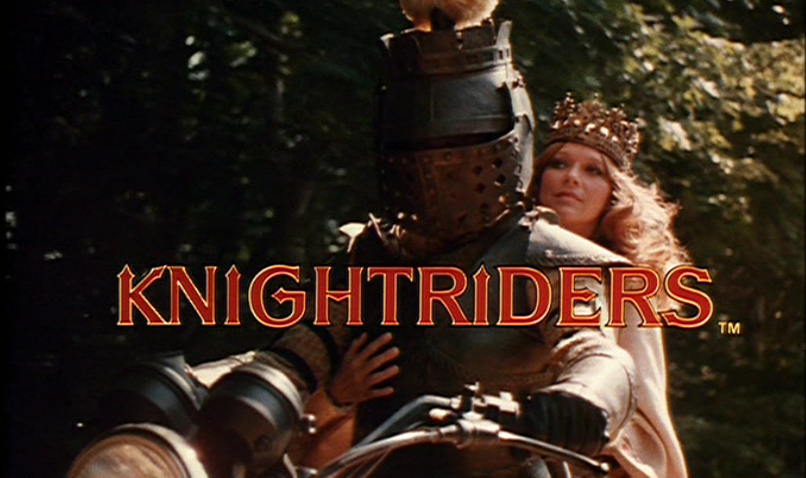 On the contrary, it’s a strangely confident movie that only uses the pretension of a traditional story to create a sprawling labor of counterculture love.  The only reason I can think that this isn’t a cult classic is that it was made in 1981, arguably several years after “the revolution” was over.

Some may even call the inability of the film’s structure to hold fast ‘frustrating’.  Or they might say that the lack of cookie cutter (read: consistent) characters is a sign of inept writing and directing.  If Romero had a reputation of overly long “message movies” where the message was unclear, these aspects of the film would be a bit more overwhelming.  Admittedly, Romero has often tried to fit unorthodox ideas and social commentary into his films, but Knightriders‘ anomalous place in his filmography is a welcome oddity.

That being said, I also recommend checking out the previously mentioned New Gladiators (I Guerrieri Dell’Anno 2072) as well.  It’s way better than it should be and does promise over-the-top, futuristic motorcycle fights.  I watched it awhile ago and it’s not incredibly easy to find, so I’m not sure if I’ll get around to writing about it here.

All images courtesy of Arrow Video