Netflixing Under The Influence: Anything’s A Magic Weapon In I, FRANKENSTEIN (#ChooseYourWeapon)

Because it’s #ChooseYourWeapon month at Action A Go Go and I kept coming across all these promo images of Aaron Eckhart holding handheld bat’leth-looking knifey things.   Sure… that looks cool enough to qualify for a weapon-themed entry.  Also, the movie seemed so unthreatening and basic that I was curious why it had been moved from February 2013 to September 2014 to the “Neeson Season” dumping ground of January 2014.  Since the creation of this feature, both the critical trouncing and US box office failure this film endured have now become aspects that draw me to a film.

It still seems strange though, the trailer promises a visually stunning Underworld-like universe of demons, Frankenstein’s monster, and, apparently, giant columns of fire:

As it turns out, in what can be seen as a boon to the “Choose Your Weapon” premise, anything can be used to slay a demon in this movie.  Long story short: the big bads in I, Frankenstein are demons who can be descended (aka, sent to Hell) by hitting them with any weapon that has the official symbol of the Gargoyle Order carved into it (more or less, an upside-down papal cross).   And if that sentence reads as stupid to you as it felt for me to write it, then you’re in for a treat!  Anyway, in addition to the sharp weapons mentioned above, Adam Frankenstein (Aaron Eckhart) wields metal escrima sticks throughout.

Drank some Jim Beam and Coke Zero while checking out this one.  Nothing to review here on the booze front.  It’s a go-to cocktail for me.  This fella is available on Netflix Instant, so I watched it in the comfort of my own home. 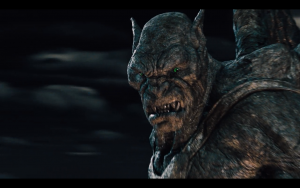 Exposition, exposition, and more exposition.  It wasn’t until after the end of the film that I realized the comparison to that other movie about legendary monsters carrying on a centuries old feud wasn’t accidential.  I, Frankenstein was co-written by Underworld creator Kevin Grievoux.  It makes a lot of sense, because the first two acts of both films filled me with an equal amount of confusion and apathy as they fleshed out their asinine mythologies.  I, Frankenstein begins by quickly and stylishly summarizing the original Frankenstein story.  Dr. Frankenstein creates a monster out of dead body parts.  The two have a “disagreement” where the beast kills Frankenstein’s wife.  The doctor follows his creation to the North Pole and immediately succumbs to the elements.  Frankenstein’s monster is sad.  While it does utilize some clunky narration, it’s an artfully shot example of the old filmmaking adage of “showing, not telling”.  Unfortunately it’s only about a minute of running time and the rest of the movie follows the “telling, not showing” corollary. 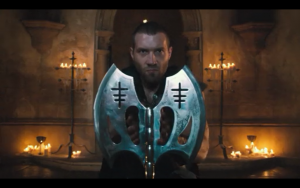 The monster finishes burying his master’s body and is attacked by demons only to be immediately rescued by gargoyles.  As soon as we leave the vision of the “source material” (and I use that term loosely) and incorporate Grievoux’s new ideas the seams begin to show and the movie really starts to fall apart.  It’s no small wonder why Mary Shelley didn’t include the gargoyle/demon plot points in her classic novel.  Eventually, the gargoyles name the creature “Adam” and proceed to explain their confusing demon-hunting history.  He is introduced to Queen Leonore (Miranda Otto) and her vanilla military advisor, Gideon (Jai Courtney).  Seriously though, how in the Hell does Jai Courtney continue to get work?  He’s an emotionless charisma vacuum that somehow keeps popping up in high profile roles and adding nothing to the respective films.  The most hilarious Internet comment I’ve ever read once likened him to “the blank, default template when you open a video game create-a-character screen”.  Yup, I can’t wait to see him woodenly stare his way through Terminator: Genisys and Suicide Squad.

Anyway, the gargoyles continue to throw around portentous character names like Naberius and discuss the 666 demons who have been unleashed upon the Earth.    They ask Adam to join them in hunting demons, but he declines.  He takes some weapons and wanders uninhabited areas of the world for hundreds of years until the demons find him. 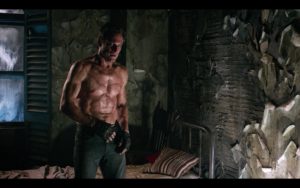 This makes Adam angry and he becomes a demon hunter, despite that being the exact thing he declined to do when the gargoyles asked in the first place.  This is all standard world-building that is delivered in such a rushed and unsophisticated way that it feels like director Stuart Beattie is trying to keep the audience at arm’s length.  Finally, the movie gets to present day where Adam is still exploding demons into fire with his marked weapons.  The gargoyles grab him again and embark on some more exposition and talking so we can see them get angry that he is drawing attention to the demon/gargoyle conflict.  Of course the next sequence is a huge battle scene in the city streets, which completely discounts the whole “keep a low profile” reasoning.  It really makes you wonder why gargoyles are so exceptionally ill-suited for killing demons.  All one has to do is hit one of the 666 demons in the head with a big marked stick to get a notch on their belt, yet after 300 years there are still a buttload of demons.  C’mon, gargoyle army… you have one job! 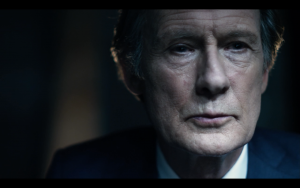 Then there is more exposition explaining that Dr. Wessex (Bill Nighy as a barely disguised Naberius) is trying to use Frankenstein’s diary to raise the dead.  And some more exposition as Adam realizes the demons are hunting him in order to unlock the secrets of raising the dead in order to have soul-less bodies for a demon horde from Hell to inhabit.  He hooks up (in a non-sexual way, which is good since he’s made out of dead bodies) with a scientist working for Naberius who helps him do some vague quest-related stuff.   As was telegraphed by the 6-7 times they mention how Adam lacks a soul, he willingly sacrifices himself to save the world which then earns him a soul.  As a result, he can’t be possessed.  He then proceeds to kill Naberius who dies in an awesome blast of flames which consumes the army of dead bodies as well.   However, the real takeaway is that all of the characters are dispassionate ciphers surrounded by predictable light shows and explosions while spouting gibberish about made-up legends . 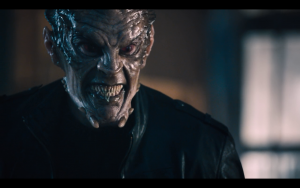 The fight choreography is just enough to keep the interest of someone invested in that type of thing.  One escrima fight scene between Adam and a demon is particularly noteworthy.  Fights like this, unfortunately, are the exception rather than the rule.  Outside of some demon make-up, practical effects are few and far between.   That being said, the CG effects are dynamic enough and show some interesting aerial moves as the gargoyles morph from human to winged form while dodging demon attacks.  Nothing here is going into the pantheon of cinematic stuntwork or exciting special effects, but the action elements are just enough to keep I, Frankenstein from being completely irredeemable.

The biggest strike against this movie has got to be, hmm… I don’t know, just the entire script.  One would honestly have to try to create such a completely unengaging and frankly stupid story.  How can a movie just be so utterly boring?  Characters flutter in and out of importance as the plot deems necessary.  Gideon almost seems like the protagonist given the amount of screentime he gets and the fact that he is the only character with any agency. 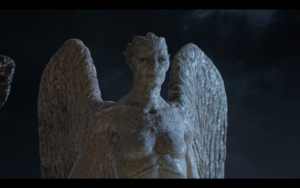 But he’s played by the actual soulless Jai Courtney, and then dies halfway through anyway!  Every other character is either interchangeably anonymous or they sleepwalk through the events as the screenplay just happens around them.  The characters’ objectives and alliances shift at the flip of a switch (the gargoyles want to kill Adam to keep him out of the demon’s hands, but suddenly decide to recruit him to help fight the demons).

Again though, it’s the ham-fisted myth-making that’s most egregious.  Dreary speeches are stuffily delivered with the enthusiasm of someone who hasn’t slept in a few days.  It’s often said of great actors that one could “listen to them read the phonebook”.  Well, there isn’t an actor living or dead I would want to listen to read the dialogue from I, Frankenstein.

This movie is not very good.  In fact, it’s terrible.  There are no big tangible moments of suckitude, it’s just a boring and poorly executed story.  In order to make it believable that Frankenstein’s monster would team-up with some gargoyles in a neverending quest to destroy a bunch of demons, the filmmakers were required to do some painfully heavy lifting.  I, Frankenstein isn’t a mess… it’s simply a humorless, ugly, and bland film that is a remarkable waste of time.  It encompasses all the things I have despised in the Underworld franchise, but with greater dullness.  And there you have it… a new worst movie of 2014.  You may remember my previous choice for this honor.

All images courtesy of Lakeshore Entertainment