Why Did I Watch ‘Hard Ticket to Hawaii’? – A Masterpiece of Machismo and Explosions

Didn’t you read the title?  It’s a goddamn masterpiece.  Even if you haven’t heard of it, you may have seen some of its greatest hits in those “craziest movie scenes” compilations on YouTube.  Feel free to look those scenes up.  But I’d suggest watching them within the full context of the movie.  Trust me, it’s worth it.

Also, this is probably one of my favorite Amazon deals I’ve ever encountered.  Bought this about a year ago as part of the 12-movie Girls, Guns, and G-Strings collection (also called Triple-B movies: Bullets, Bombs, and Babes) for $4.50!   Twelve Andy Sidaris-directed flicks for 38 cents each is such a deal, that I don’t even have any buyer’s remorse about the fact that as of this writing the total cost has dropped down to $3.99.  If you don’t think that’s freaking amazing, then I don’t know what to do with you.

I was actually able to watch this one with a bunch of friends and some brews.  We had a blast.

By the time Andy Sidaris started making “Triple B” movies, he had seven Emmys from his work in television sports including the Olympics.  I’m not sure if this is why he got an Emmy, but a neat little Wiki factoid is that he invented the “honey shot”; the act of showing close-ups of cheerleaders on the sidelines and pretty female fans in the bleachers.  It seems he brought some of that “vigor” to the film world, seeing as most of the actresses were from Playboy or Penthouse. 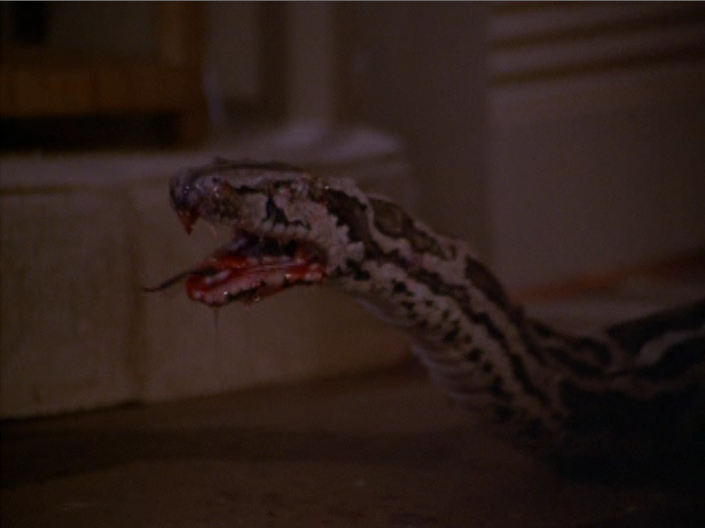 To help them kick ass and take names, they enlist their hilariously named CIA agent friends, Rowdy and Jade (Ronn Moss and Harold Diamond, respectively).  Oh, also there’s an immensely dangerous snake on the loose that has been “infected with deadly toxins from cancer-infested rats”… you know, for science.

As with most movies of its ilk, the story waffles between completely baffling to completely superfluous.  There is a little bit of detective work, some double-crosses, a whole lot of bullets, and quite a bit of bonin’.  Tools, characters, and plot points are dropped and picked up as the story deems fit in what seems to be an inverse of Chekov’s Gun.  Weapons used vary from Lugers to Magnums, bazookas to grenades, and nunchakus to ninja stars.  A scene where the four good guys sit around and  hang out is suddenly interrupted by an extended shot of a female bodybuilder doing tai chi in the villains’ safehouse. 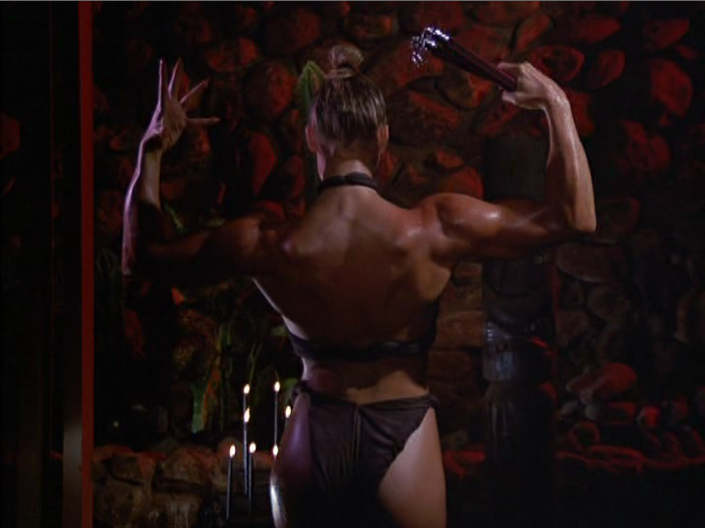 It cuts back to the good guys without comment and the strong lady does nothing of interest ever again.  Similarly, love interests pop-up halfway through the film and just kind of hang around and show up whenever one of the four major characters needs some eye candy.  The scenes that culminate in two drunk NFL players cursing live on the radio after getting drunk at the local bar are even more head-scratching.  Neither my friends nor myself have any idea why that sequence was in there besides a clunky cameo for Andy Sidaris, since it had absolutely nothing to do with the rest of the movie.  It sure as hell wasn’t funny.

“So Bad, It’s Good” cinema is an under-appreciated artform.  But by its very nature, there is usually a malicious undercurrent to the ironic way in which the audience watches.  Best Worst Movie about the rise of Troll 2, has a scene where the actors ridicule the movie at a fanfest panel discussion.  The Italian director (Claudio Fragasso) glowers at the back of the audience and uncomfortably shouts up to the “dogs of actors” on stage about how their humorous remarks about the film are factually wrong.  The most pathetic moment comes as Fragasso is complaining to the camera just outside.  When the audience claps at the end of the panel he remarks in broken English, “Some people do that [mimes clapping] to applause to them, because there was a director like me, to direct them that are nothing.  Nobody knows who they are.” 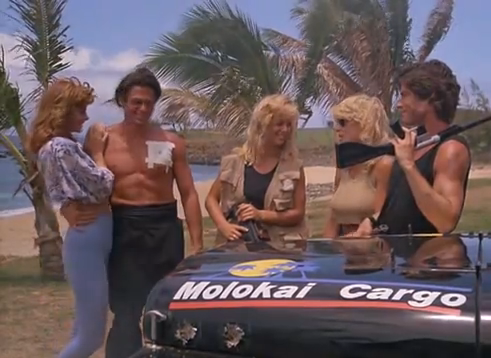 What makes Hard Ticket to Hawaii work is that it’s self-aware without being tongue-in-cheek.  As a result, the audience is laughing with, not at, the stupidity on the screen.  Andy Sidaris isn’t parodying unreasonable explosions, gratuitous nudity, or “Did that just happen?” moments of shock.  He’s reveling in them and celebrating the innate weirdness of it all.  The scenes that don’t feature outrageous moments play like a big ol’ hangout movie with some attractive people who happen to really like guns.  Towards the end, our crackshot team of gun-toting heroes is driving away from the climactic battle at the bad guys’ lair.  As they good-naturedly recap all the (righteous?) murders they just committed, one of the women looks up and says “What about that bastard Seth?”, who at this point is the chief villain.  Cut to: squealing tires and Rowdy tearing out of the van on a motorcycle to go back and finish the job.  Yes, they plumb forgot about the main bad guy… and the comedic timing of the scene is downright perfect.

Andy Sidaris is like a more raw version of Michael Bay.  He revels in scenes of scantily clad babes, balls of fire, and ham-fisted humor.  But more importantly, because of the wild abandon of his directing style, the fun never stops.  From the playful yet overwrought opening credits where all the names are written on boxes in a cargo hold, 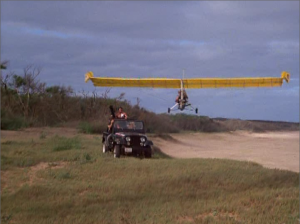 to the final dummy falling out of the final window, the movie never runs out of steam or new jokes/setpieces to top the last ones.

Speaking of Michael Bay, it’s important to note that the budget of this one kept honestly surprising me.  They may have utilized a cheap-looking snake puppet, but the ultralight stunts, the scenic Cessna flying scene, the helicopters, and the gorgeous on-location cinematography almost had me thinking I was watching a real movie!

While I mentioned above that the really batshit insane scenes should be seen in context in order to heighten the experience, it would be unforgiveable to have a thoughtpiece on Hard Ticket to Hawaii that doesn’t at least mention either Death by Frisbee or the Skateboard Assassin.  I chose the latter because:

You can knock the storytelling quite a bit, but why would you?  The fact that there isn’t really a main character is a fun addition to the post-film discussion (over tea and crumpets perhaps?)  When Rowdy is introduced sexing a nameless girl on a yacht and he doesn’t show up on screen for another 20 minutes, it might be apparent that the pacing is unlike any you’ve ever seen.  When Hope Marie Carlton’s character off-handedly mentions being in the witness protection program, you might want to pause and ask some questions.  Don’t.  Just go with the flow.  Sidaris throws around phrases like “witness protection” and “the agency” like he barely knows what they mean anyway, so keeping track of what is going on for the first thirty minutes doesn’t even have time to register. 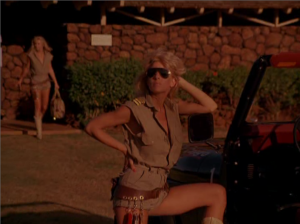 By that point, you know who represents good and who represents evil, and that is all that’s important.  Even the stuff that doesn’t work (the aforementioned NFL side story), is funny precisely because it doesn’t make any sense.

Although, I will admit that all the blonde Playboy chicks look vaguely similar (I recommend looking for distinguishing birthmarks during the nude scenes or keep a chart on how feathered each lady’s hair is for identification purposes).  Their use in the film predictably raises questions about the objectification of women.  However, in its own juvenile way, Hard Ticket to Hawaii is a sex-positive empowerment film.  Men and women alike are photographed for maximum aesthetic appeal and equally capable on the battlefield.  All you can really do is admire the audacity of the whole thing.

If it isn’t obvious, I highly recommend this one.  Hard Ticket to Hawaii is an exercise in entertainingly excessive action filmmaking in the tradition of Road House, Cobra, Hard Target, and Commando.  If you haven’t seen it, please do.  I’m not even going to link here to the full movie which is totally available on YouTube, because c’mon.  Twelve movies for four bucks!