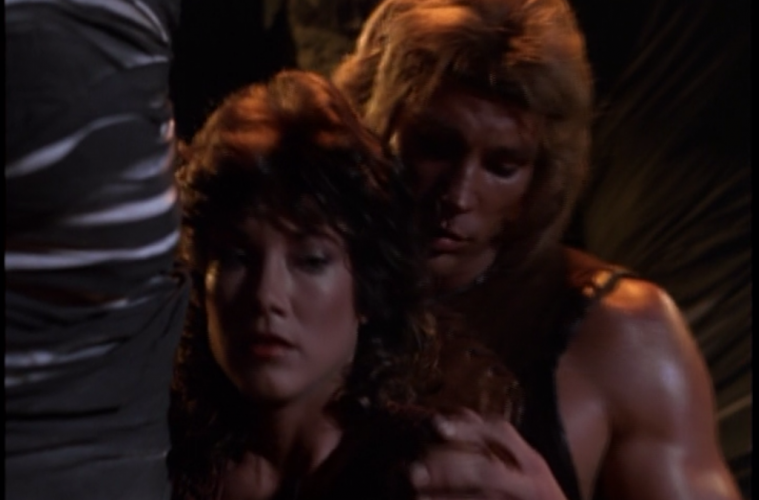 Why Did I Watch This?: ‘Deathstalker’ Only Thinks With What’s Between His Loin-Cloth

Deathstalker has made me a victim (yet again) of the “Unavailable on Netflix DVD, but available by Instant Watch” conundrum.  Maybe I’m the only sufferer, but it’s a damn compulsion, I tell you!  Also, I know there are three sequels to this one, so I figured there would be something worth watching that at least partly lived up to the enticing cover.

Alone.  Had a couple of beers with me, but that’s all.

For some strange reason, the early 80’s were a boomtime for the sword-and-sorcery flicks, most notably with Conan the Barbarian and Beastmaster.  Often, a subgenre film revival mirrors a strong societal/political movement in the global consciousness.

In this case, however, filmmakers were seemingly looking for new ways to coast off the success of Star Wars without making it SUPER obvious.  Although, maybe there’s something about Jimmy Carter that had audiences looking for roid-ed out idiots who stabbed their problems away with a giant sword.

In this movie, especially, the story consists of a lot of pre-Dark Ages nonsense with a large helping of boobs.  That’s really kind of the point.  However, if forced to actually come up with a plot, Deathstalker is about an extremely unlikely hero who needs to fight an evil wizard in order to obtain “the three powers”: a chalice, a sword, and an amulet.  As is par for the course in the “quest” genre, Deathstalker (Rick Hill) meets up with a ragtag groups of characters after he embarks for the villain’s castle.  These include a thief-turned troll, a non-descript douchey guy, and a beautiful (and mostly naked) warrior played by genre mainstay Lana Clarkson.  They battle all manner of beings along the way, only to finally reach their destination and join a tournament where the entrants fight to the death.

If you think a mystical tournament with musclebound men and monsters sounds awesome, then don’t get your hopes up for this particular part of the storyline.

The tournament doesn’t even begin until over 67% into the film.  It consists of exactly one poorly choreographed fight and an unfulfilling montage.  In fact, the tournament has nearly nothing to with the movie.  Its only purpose seems to be to distract people so anyone who’s NOT fighting in the tournament can wander around the castle.  This is great, because watching a half-naked dude look for a chalice is way cooler than watching actual fights.

In fact, the whole impetus to the story makes less sense than if they went the simple Enter the Dragon route.  Firstly, a wizened old woman tells Deathstalker (“To Mr. and Mrs. Stalker, a son: Death”) he needs to join the three powers of creation so that the evil magician Munkar doesn’t get ahold of them.  Unfortunately, our villain starts out with the amulet and the chalice, meaning he only needs the sword.  Apparently the solution to keeping the sword from Munkar is to infiltrate the castle and try to steal the other magic objects.  I mean, in the end it obviously works out, but keeping an all-powerful magic out of the hands of evil by bringing it to evil’s house seems like a counterintuitive way to accomplish one’s ultimate goals.

The plot is really secondary to the film’s hyper-masculine, Heavy Metal-like wish fulfillment.  An oily, jacked dude goes around a fantasy world not giving a shit and hitting stuff with both his sword and hands.  Also: boobies.  Lotsa boobies.

The set design and costuming seemed professional enough. However, I wouldn’t be surprised if they stumbled into some old Dragonslayer filming locations and reused some props that were just laying around. This becomes evident once you realize how terrible the make-up, special effects, and virtually everything else turned out.  Either that or they literally blew their entire budget on a castle and cave set and then just decided to do the rest of the film on the cheap by making the monsters look less organic than most Muppets.

There are also some small points of interest that indicate at the slightly tongue-in-cheek masterpiece this could have been.  Rick Hill loves to execute these sardonic little shrugs whenever anything important happens, betraying an idiotic bravado that’s kind of interesting to see in a hero.

It definitely gives an idea of the amount of respect the actor gives the silly material and it is just downright amusing every time it happens.  In the same vein, there’s also a fantastic moment where a giant pig beast is fighting some dude only to pause for a second, and rip off his arm and continue beating him with it.  This movie would have benefited from some unique character beats and charm instead of the generic action and unengaging characters that ended up on screen.

As alluded to in discussing the pretty lame tournament and “Three Powers” premise, the movie fails to make sense on quite a few levels.  For example, at one point our hero needs to use the sword to change a troll back to his original human form (because in addition to it being the power of justice, it’s apparently the power of transmogrification or something).  He taps the troll with a glowing sword and Deathstalker inexplicably turns into young child for about 15 seconds before the troll jumps into a river and he becomes an adult again.  I promise, this happens with neither comment nor explanation.  I watched it twice and it still doesn’t make sense.

More importantly, the movie is a bit too pervy.  I’m not typically the type of person to think sexual violence is off-limits in a movie.  It can definitely serve both story and character and has several times across several different genres.  However, literally ever female character in Deathstalker is raped and/or threatened with rape… even from our hero.  I love a complicated antihero as much as the next guy, but all that damn rape came off as too pervasive or leery to be anything else but gross fetishism.

When the villain is shown to be a bad guy through his expansive and dehumanizing harem, it helps to have, you know, a hero with upstanding morals so we can route for him.  It especially leaves a bad taste in the mouth when you can tell the audience is supposed to be enjoying all the bare breasts, but most of the nudity is presented in a pretty terrifying way.  Even Lana Clarkson’s muscular warrior woman finds herself on the receiving end of some unnecessary threats.

God, no.   Deathstalker may go by quickly, but it’s boring, silly, and offers almost nothing to the audience.  Just imagine a version of Conan the Barbarian that throws half-baked ideas on the wall to see what sticks (spoiler alert: nothing) with some exceptionally underwhelming fight scenes.  Then flip through an issue of Playboy.  You just saved yourself an hour and a half.

In fact, I was going to say that this is the worst movie this feature has produced thus far, but then I remembered The Trial of Billy Jack was nearly 3 hours long.