Why Did I Watch ‘Black Mama, White Mama?’: “From a Hellhole of Twisted Passions, to an Inferno of Flaming Death”

Watched this one alone via Netflix Instant… as per usual.

Eddie Romero (the Blood Island series) directs from a story by Jonathan Demme (Caged Heat and, uh, Oscar winning director of The Silence of the Lambs), with a gentle love of both gunfire and the female form.  The unexpectedly coherent tale follows genre mainstays Margaret Markov (playing rich revolutionary Karen Brent) and Pam Grier (playing Lee Daniels… a hard-nosed prostitute, not the director of The Butler) who separately begin causing some trouble in their all-women’s prison. 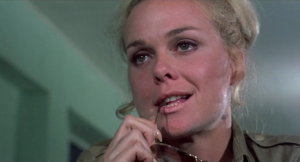 Familiar beats are hit as an abusive guard by the name of Matron Densmore (Lynn Borden) torments the prisoners while secretly lusting after them.  In just the first few minutes, the nude prisoners are all playing grab-ass in the shower while Densmore pulls a Porky’s and pleasures herself while spying on the girls through a peephole.  Later, when she tries to recruit Daniels to be her lover (and consequentially receive special treatment from the sadistic guard), it seems like Black Mama, White Mama is on its way to being much more of a nonstop pornfest than the other movies in the genre.  However, after Daniels declines her advances the focus of the story moves to her contentious relationship with fellow inmate Brent.

Since Brent has ties to the revolution and Daniels has ties to her drug lord pimp (Vic Cheng played by a familiar face to Filipino exploitation fans: Vic Diaz), the women are chained together and transferred to another prison for questioning.  On the way, the revolutionary contingent attempt a disastrous rescue of Brent in which our lascivious villain is killed and the still handcuffed inmates are forced to run into the forest alone in order to escape the police response. 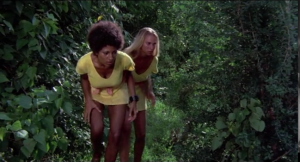 At the beginning of the second act it suddenly no longer feels like a WiP movie, but instead a gender-switched, exploitation version of The Defiant Ones.  Since the protagonists hate each other, a good portion of the film is them decrying the chain forcing them to stick together during their escape.  Because she’s a wealthy white woman from the U.S., Brent is somehow a necessary contact for an arms shipment meant to aid the revolution.  Meanwhile, Daniels just wants to get out of dodge and onto the first boat off the island since she stole $40,000 from the drug dealer she was hooking for at the time of her arrest.

As they run from their pursuers (including a menacing and flamboyant cowboy named Ruben played by Sid Haig), they slowly begin to respect each other and learn to work together as can be expected by anyone who has ever seen that episode of every hacky sitcom where characters get handcuffed together.  They finally meet up with the revolutionaries and make their way towards the docks so they can get the guns and Daniels can get off the island.  The drug dealers are waiting for them though, which leads to an epic shoot-out that carries the film through to its somewhat shocking conclusion. 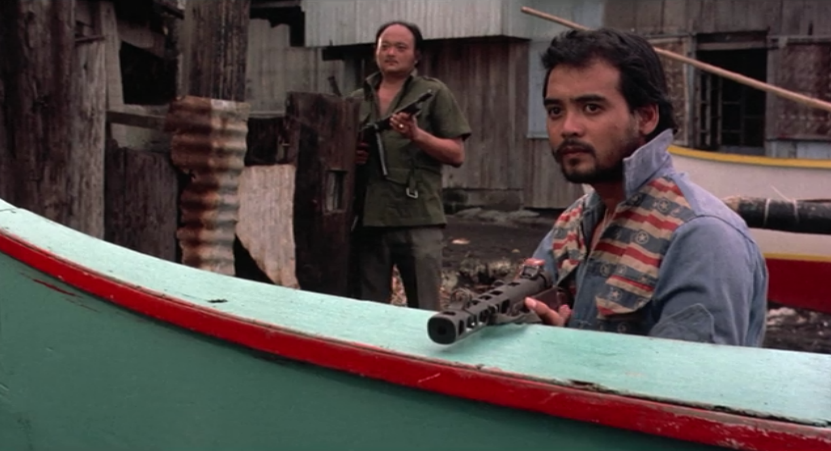 While Black Mama, White Mama included many of the elements of traditional WiP movies (women, prisons, nudity, Pam Grier), the switch to “Women on the Lam” was a bit of a curveball.  It allowed for less of the (typically misogynistic) scenes with chickfights, sadomasochism, and revenge fantasies.  When dealing with such a specific type of genre film, these “oversights” regarding the obligatory elements tend to be a drawback.  However, Eddie Romero was able to include more interesting characters, a richer plot, and a whole lot of gunplay by leaving a lot of the expected cliches behind with the confines of the prison.

This is going to sound like a backhanded compliment, but there’s barely any rape!  These movies do tend to use the violent act as a titillating torture device against the heroes or a disturbing comeuppance for the villains, which definitely can be troubling to watch.  Yes, there is torture and attempted rape in Black Mama, White Mama.  But the really icky stuff is featured substantially less than a typical WiP film. 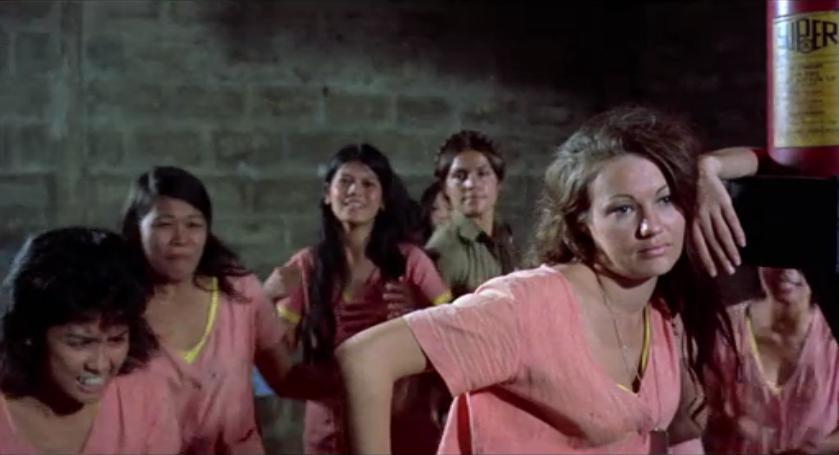 Eh, I don’t know… the more I type this, the less comfortable I am calling this a “Highlight”.

Well… the movie just looks a lot more professional than all the other rapey WiP movies.  The editing is solid, while the action is clear and consistent.  Even character moments are given space to shine through and time to breathe.  A scene where Pam Grier calls out Markov for treating the island and its revolution as “the rich chick’s new toy” is an uncharacteristically poignant piece of social commentary that helps fulfill some of the pseudo-blaxploitation requirements promised in the title.  And for all you pervs out there, the insult immediately leads to a particularly cool girlfight complete with slapping and hair-pulling.

I have to admit that the ninety degree turn in the beginning of the movie threw me for too much of a loop.  Normally I absolutely love when an unexpected plot direction shakes up a film, but watching the two women run around in the jungle became a bit repetitive.  It ends up feeling very strange to set-up conflicts and friendships with several female inmates, only to abandon them completely for one story about two women.

Additionally, with the way the villains were introduced it ended up being a touch difficult to really become invested in any character who wasn’t Brent or Daniels.  The big heavy is initially Matron Densmore, but she’s disposed of very early on.  Then we’re immediately introduced to the government official who was interested in the women’s revolution/drug ties in the first place.  He tells his second-in-command, a mostly well-meaning police officer, to hire Ruben’s thugs to track them down.  However, Ruben is cruel and insane (signified by his bright blue ensemble with the pink kerchief), so in the middle of hunting the escaped inmates he decides to humiliate the main official by threatening to shoot the guy’s dick off with a handgun.  This serves to confuse the issue as to who’s actually in charge. 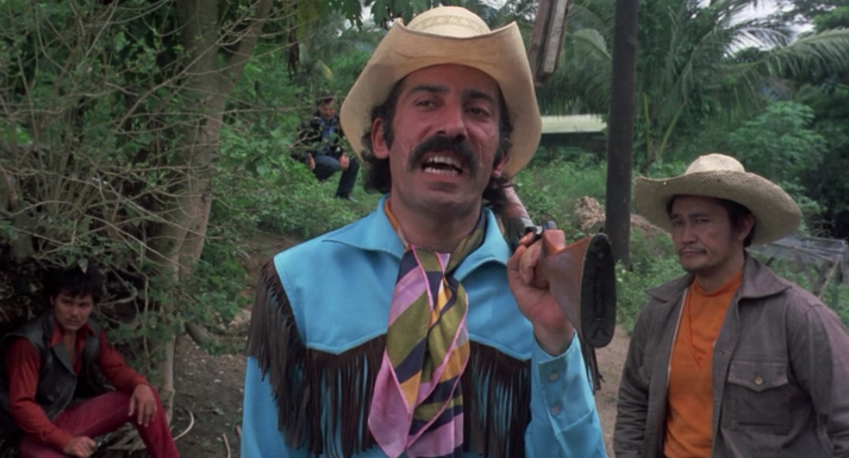 Meanwhile, the similarly barbarous Cheng mobilizes his sufficient firepower to try to track down Daniels and the $40,000 she stole.  However there are long stretches of screentime where he isn’t featured and the audience doesn’t even know what he is up to, despite him being the ultimate obstacle to freedom for our heroines.  Lastly, the band of revolutionaries are also looking for the escapees, but frustratingly enough, the women are determined to stay hidden because of all the other aforementioned threats to their freedom.  It ultimately leads to an over-stuffed story that leaves you pining for a simple “Guards = Evil, Inmates = Good” conflict.

“Women in Prison” movies, especially of the Filipino persuasion, are quite the beast.  They lay on the “pretty damn sexist” side of the grindhouse film spectrum, but still have some great b-movie elements totally worth watching.  If you can sit back and enjoy these without having to worry about the type of person who might “enjoy” these fairly disturbing movies the wrong way, than it’s definitely a world worth exploring.

I still have to admit that the most fun movie in the group is still the regrettably homophobic The Big Doll House (also starring Pam Grier and Sid Haig, and directed by legend Jack Hill), however Black Mama, White Mama is a more than worthy entry to the genre.  As I mentioned above, its commitment to some sort of social commentary about race and corruption (and an actual plot to break up the shots of all the naked women) makes it feel much more like a real movie as opposed to an excuse for sex and violence.  Most of this has to be credited to its inspiration from the classic The Defiant Ones, but I wouldn’t hold that against them.