Netflixing Under the Influence – Cyborg Style: ELIMINATORS Is a Knock-off of ‘The Terminator’ with No Ambition

To celebrate the upcoming release of Terminator: Genisys on July 1st, Netflixing Under the Influence is gonna be all cyborgs all the time for the next couple of weeks.  Maybe this 5th movie in the Terminator franchise seems unnecessary, dependent on fan service, weirdly insistent on retconning the series, and stupid as all get out.  But who cares!?  None of that stopped Jurassic World from having the biggest opening weekend of all time.  We’re all going to pay to see it and complain or be fairly ambivalent.  And then the cycle begins anew with Fantastic Four: The Reboot

Eliminators is a Charles Band joint, who has had his hands all over this feature a number of times.  The legendary b-movie producer, along with director Peter Manoogian, also made the sci-fi gladatorial extravaganza Arena a couple years after this.  Despite Arena‘s cheesiness and cliché story, that movie is a surprisingly entertaining treat.

It’s strange that someone would devote two minutes to a video of the cover of this particular movie (let alone the time to film and edit the thing), but on a spiritual level I love whoever did it.  The pulpy paints highlight the ninja, the scientist, the mercenary, and the cyborg as equals on some gun shooting death squad.  80’s action movie covers/posters were often intentionally misleading, but this image is just too good to not want to see the film immediately.  Also, while I doubt James Gunn and Marvel’s marketing team were referencing this movie specifically, I’m just gonna leave this here regardless: 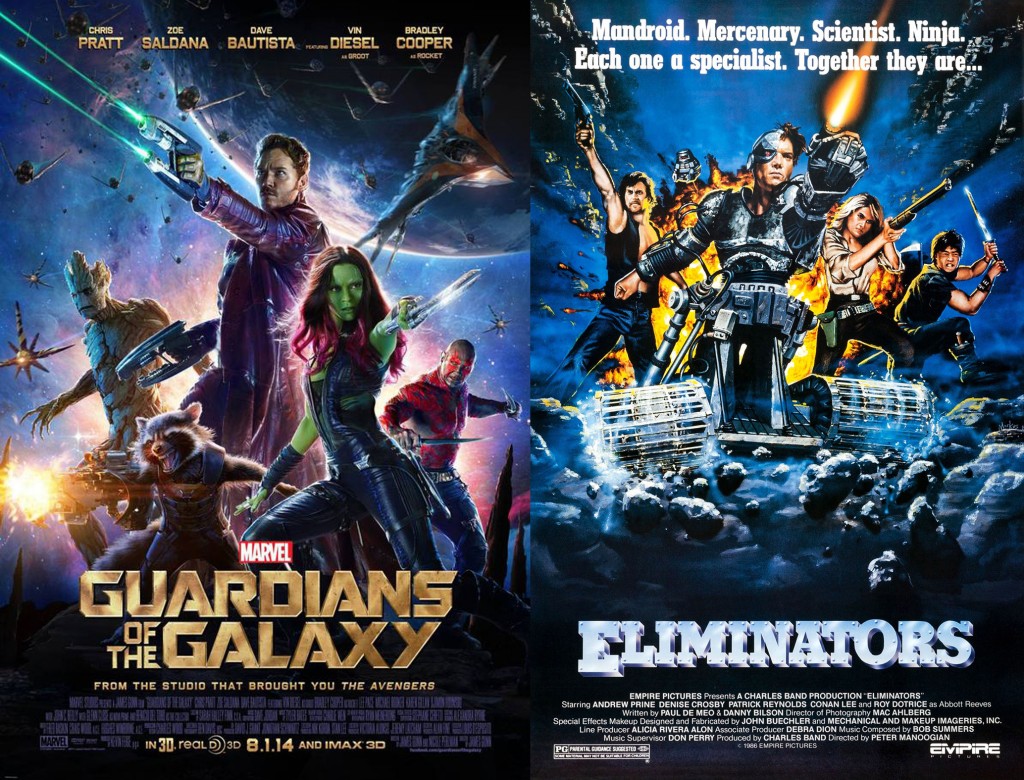 This was a pretty low-key night with a six-pack of Blue Moon Summer Honey Wheat and a couple of light beers that were leftover in the fridge.  The Blue Moon is a little too tart for my tastes, as it almost reminds one of a shandy.  It did have a nice full flavor though and was an apt addition to the wackiness onscreen.

Eliminators wasn’t just made by the same creative team as Arena, I also happened to buy it as part of the same value pack.  The two movies are even on the same dvd!  This was originally slated for a write-up a few months ago, but it was held off to align with the release of Terminator: Genisys.

Stupid b-movies tend to go one of two ways.  The first is the aggressively simple film with the hackneyed script.  These tend to live or die by the commitment of the cast and crew involved, but can use the basic plot structure as an excuse for focusing on making the most of a limited budget.  The more mind-boggling path is to make the same type of movie, only with a needlessly complicated story.  We’re about to wade into the latter type of movie.

Eliminators is the tale of a mandroid (“John” the Mandroid) created from the body of a South American pilot.  He’s played by the appropriately wooden, John-Boy-lookin’ anti-smoking activist (?), Patrick Reynolds.  Two mad scientists (Doctors Abbot Reeves and Takada) regularly send him through a time machine to kill a bunch of Roman soldiers, which to be fair, is what we’d all do if we were scientists.  The only evidence that Eliminators is an obvious cash-in on the success of 1984’s The Terminator is the fact that he’s a time-traveling robot and that whoever titled the movie presumably owns a thesaurus.  From here it just gets weird.. 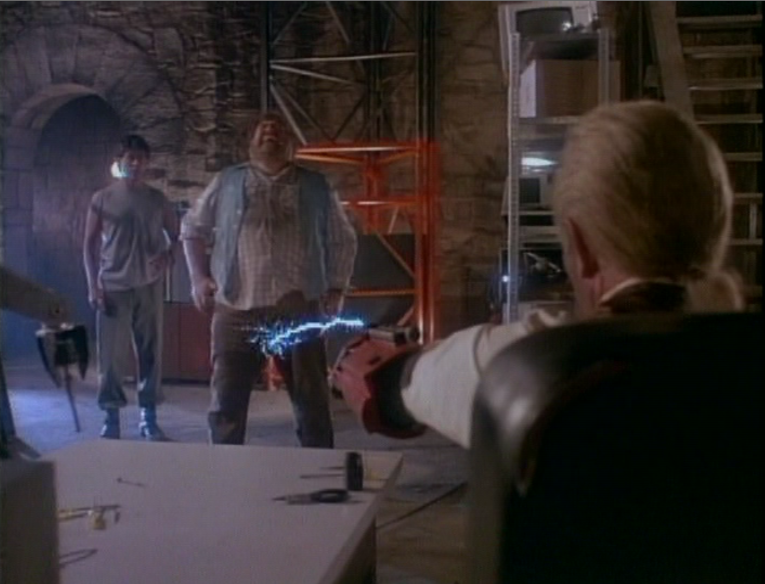 When John starts to have flashbacks of his time as a pilot, the evil Dr. Reeves (Roy Dotrice) orders him dismantled.  However, Dr. Takada (Tad Horino) is basically a cool dude, so he helps John escape at the risk of his own life.  In fact his dying breath is spent to tell John to find Colonel Nora Hunter, a mechanical engineer who Takada had worked with in the past.  The mandroid hero travels from South America to the United States to infiltrate the most lax security in the history of military bases: “There’s a power surge on the east end.  Shouldn’t we check it out?” “Nah, it’s a cat or something.”  Not only am I confused how a cat creates a power surge, but wouldn’t a power surge in a research lab be a big deal no matter what the cause!?!

John meets Nora (Denise Crosby) and after she realizes that Dr. Reeves has been using her robotic designs for evil they immediately head back to South America.  They’re seriously in the states for about 3 minutes.  Now, I haven’t flown internationally in awhile, but it’s mind-boggling how Nora Hunter is getting an entire mandroid as well as her flying, ROBBIE-looking pet robot, S.P.O.T. past security.  Although S.P.O.T. does have the power to turn his mass entirely into a ball of light, so maybe he could slip through.

Regardless of how they get to South America, after they arrive, the toy robot cutely opts for a camouflage paint job. 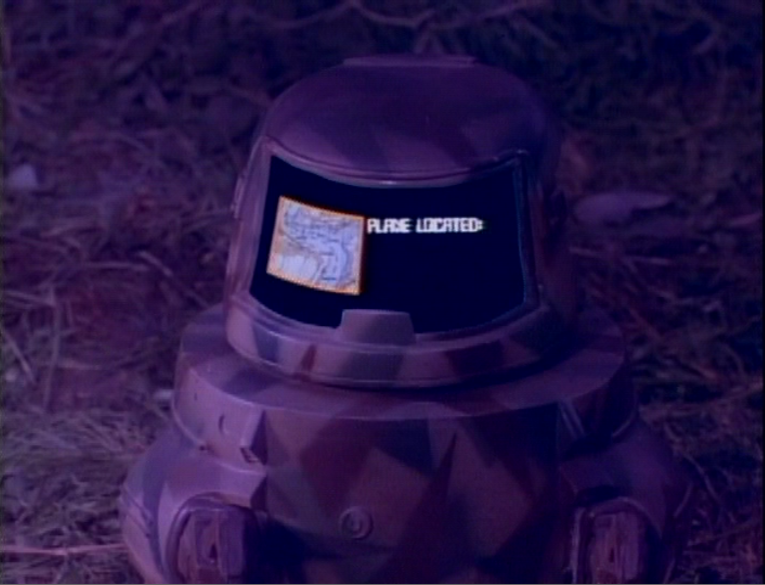 Eventually they hire a riverboat captain by callously asking for the “toughest guy” in a shady bar.  This attracts the attention of an unethical smuggler named Betty Bayou, who loses the fare to the wimpy, yet wily Harry Fontana (John Prine).  Although I couldn’t stop thinking that since they’re in South America, she should really change her name to “Annie Amazon.”  “Rita River?”  Actually this whole “bayou” thing might explain the quick excursion to the States to find Colonel Hunter…  maybe the filmmakers actually think “South America” just means “Louisiana.”

At one point Bayou Betty holds Fontana up at gunpoint so he can give her his “fares” (referring to John and Hunter).  It’s unclear why she wants those particular fares so bad.  She complains about not making enough money, but the fuel and effort to track down Fontana and hijack the people on his boat seems more trouble than it’s worth.  Just imagine you’re in a taxi and someone shot your driver and forced you into their cab instead.  If anything, it’ll be an awkward drive… and I guarantee they’re not getting more than 10% tip.

After taking out a whole lot of time for Hunter and Fontana to act out the romance from The African Queen, they meet up with Takada’s son Kuji (Conan Lee)… who happens to be a ninja.  Once he finds out his father has died, he’s ready to join the group and “get down to some eliminatin’!” (Note: nobody ever actually says that in the movie).  Eventually they hook back up to John’s “mobile unit” which is essentially a tank-sized monster of mechanical treads that takes him a legit 27 seconds of screentime to get in and out of.  It honestly feels like the movie takes a break to watch someone at a retirement home put on his slippers. 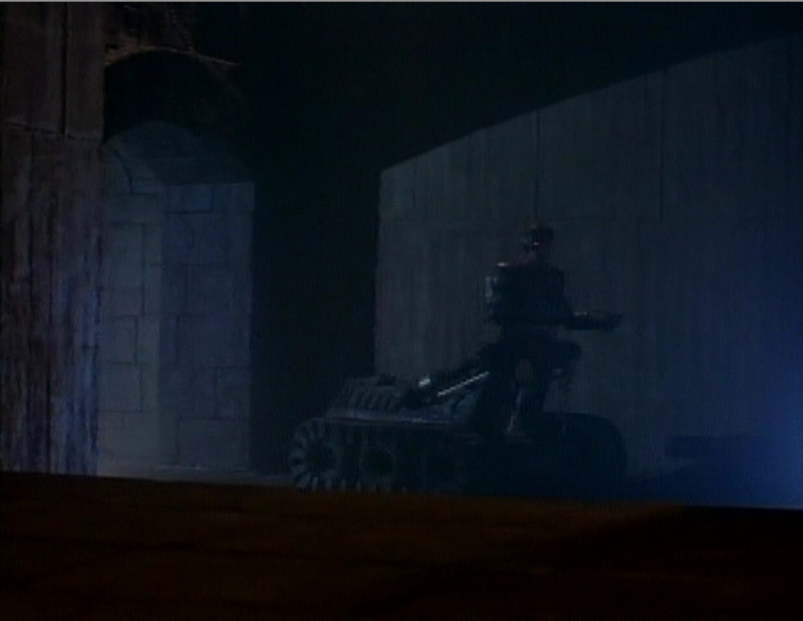 The machine itself is an impressive piece of work that clearly cost the production a pretty penny.  Although there’s clearly something wrong with the construction, because it’s never photographed with enough light to get a good look at it.  All in all, the monstrosity simply helps him move slightly faster, but he can’t even turn around to shoot at things behind him.  During one decisive battle he rolls halfway up a hill and falls over, flailing around on his side like a baby pug.

Everyone’s motivations are really muddled here.  John wants to find his crashed plane so he can figure out where he came from.  Hunter wants to help John, but is also invested in stopping Reeves from stealing her designs or something?  Because when John falls into the water, presumed dead, she says “He’d want us to keep going!”  Keep going for what?  At this point, none of the character know of Reeves’ evil plans, so why wouldn’t they just turn around since John’s the whole reason for the trip anyway?  Fontana just wants the treasure that he thinks John and Hunter are looking for, even though it’s clear one of them’s a robot and clearly not looking for diamonds.  And Kuji just wants to kill Reeves now that he knows his dad is dead. 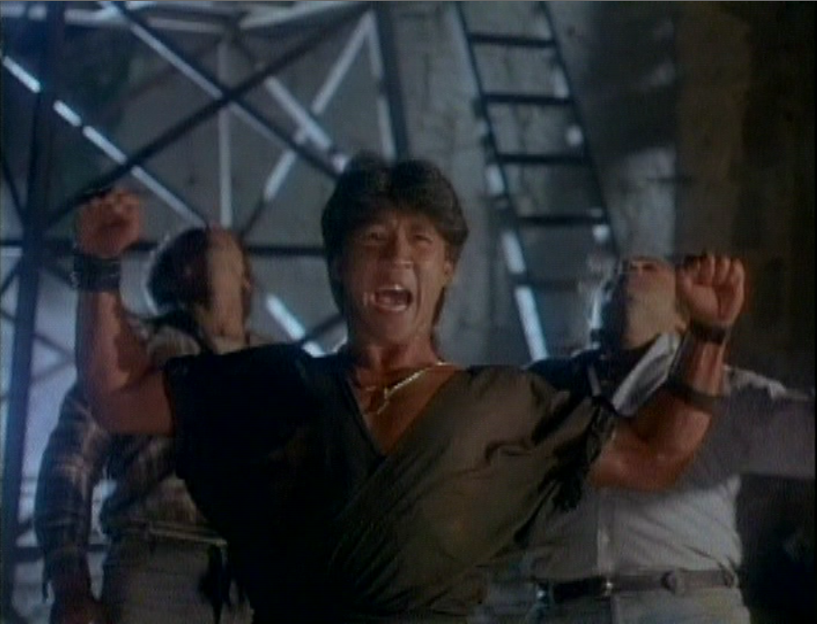 So they’re finally kidnapped by neanderthals, which is how they discover Reeves has been using time travel.  Luckily, in addition to being a mechanical engineer, Hunter knows several details about the social anthropology of Neanderthals (as well as being able to read Ancient Latin… you know, the whole catch-all scientist thing).  She also has a wet t-shirt contest all by herself when she dives in to see what she can salvage from John’s plane.  So, if you’ve ever been fiending to see some Tasha Yar sideboob, this is your chance. 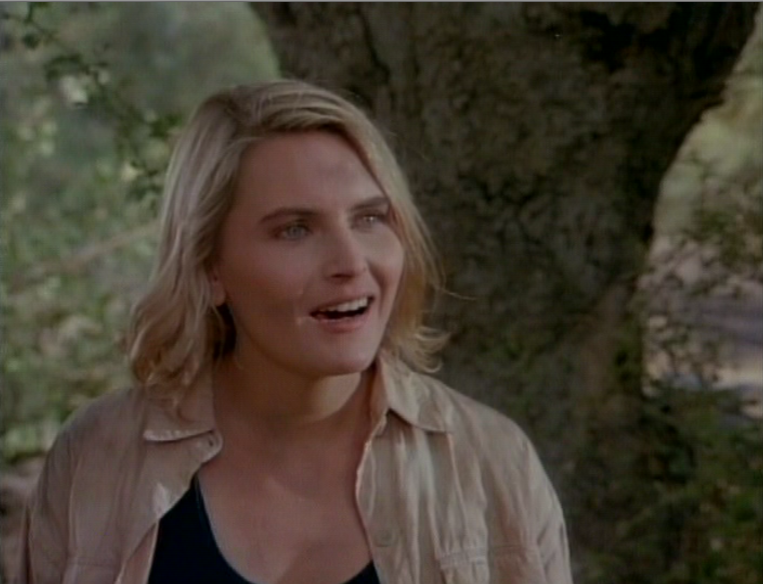 Our team of “Eliminators” finally makes it to Reeves’ fortress where they discover his delusions to turn himself into a cyborg, head to the days of the Roman Empire, and become Caesar.  Ultimately John sacrifices himself to save his friends, but it’s all for naught as Abbott gets away in a time machine to the Roman Age.  And that’s how the movie ends… until Fontana snarkily remarks, “I knew I should have learned computer programming” while dragging his fist across the computer keyboard and then punching it.  Fortunately, that’s exactly what’s needed to make the computer freak out and send the villain to The Silurian Period in 435,621,297 B.C., where the most evolved being on the planet was likely spiders.

Eliminators, fortunately, has at least some sense of humor about itself.  That subversion at the end, where the villian wins and the ne’er-do-well mercenary accidentally thwarts his plans after the fact is almost kind of clever.

Similarly, it’s easy to ridicule the whole Cajun riverboat captain rivalry in South America, but it’s clearly played for laughs.  In fact, the best joke of the movie comes when Reeves’ henchmen (who are also rednecks for some reason), chase down Fontana in their boat: the Quo Vadis.  Fontana asks what the name means, to which one of them replies, “It’s Italian. It means ‘We kick ass!'” 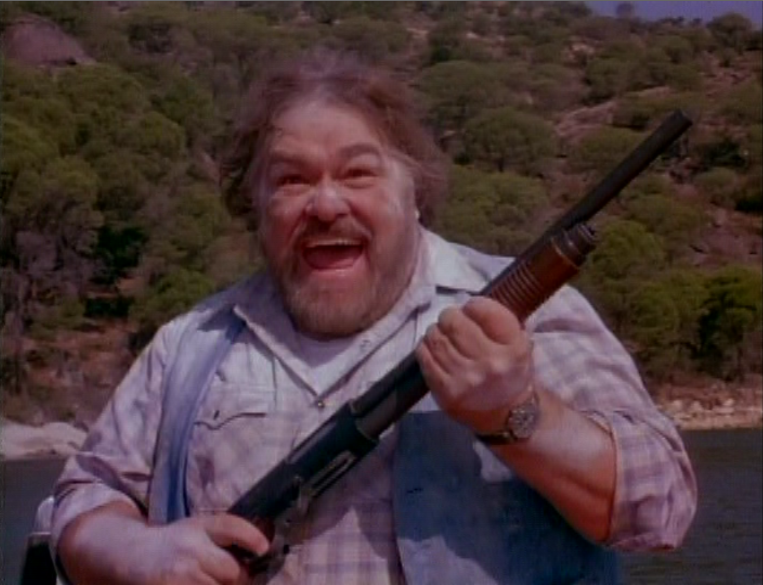 You’d think a movie featuring a ninja and a “mandroid” teaming up to fight a Roman emperor leading an army of cavemen would be so much cooler.  None of the mandroid or ninja or centurion or neanderthal or time travel or jungle adventure elements are taken advantage of at all.  In this case, John is an emotionless, self-serious beast stuck in the middle of the “witty” repartee between a rakish boat captain and a plucky blonde scientist.  And that’s the movie. 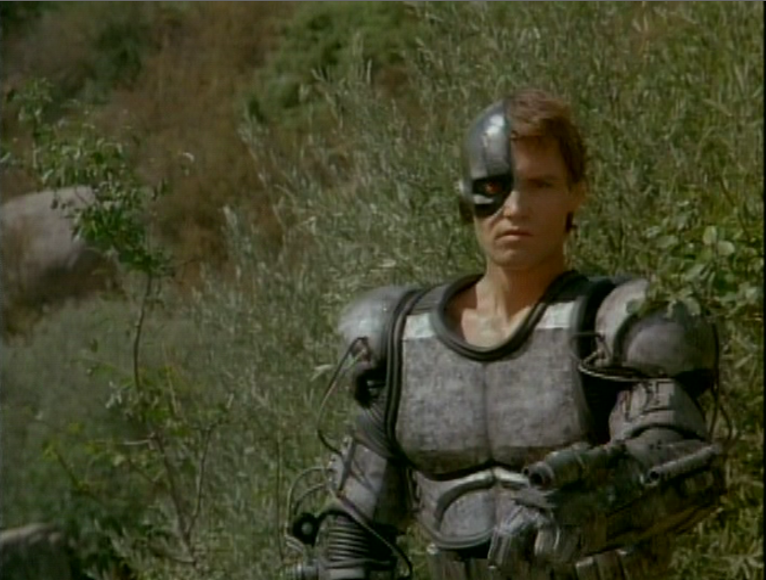 The more “out there” ideas definitely warranted less of a boilerplate narrative construct.  Even worse, the action mostly consists of some bad laser effects punctuated by the occasional explosion.

Typically, the less successful b-movies seem to have been written by a child who has seen a few movies, but doesn’t understand how the concepts of cause and effect work in the realm of storytelling.  Eliminators is that.  It’s Axe Cop without the enthusiasm, originality, or sense of humor.

All images courtesy of Empire Pictures