Why Did I Watch This? : ‘Johnny Mnemonic’

For the first time in this feature, we’ll be covering a movie that I HAVE seen before.  19 years ago when I was 10 years old I watched this because it seemed like a cool high-concept technothriller full of explosions and decapitations (SPOILER ALERT: There are only 2 decapitations).

The other day I watched it because it’s been collecting dust in my dvd collection since I picked it up for $3 at a Blockbuster that was going out of business several years back.  All I remembered about it was a violent hobo who thought he was Jesus, a guy who kept trying to cut off Keanu’s head with a laser garrote, and a dolphin who could hack the net.  Somehow I was just as disappointed as an adult as I was when I watched it nearly 20 years ago.

With my girlfriend!  Finally another human being to share in my misery and to crack a few jokes with!  Unfortunately, the movie was bad enough that her attention level decreased to about 60% after the first 15 minutes

Johnny Mnemonic is about an information courier named “John Smith” (Keanu Reeves) who uploads encrypted information into his brain and smuggles it across borders to interested parties.  Something goes wrong with a job (his last one before he gets out of the business, of course) and Smith finds himself on the run from evil corporations, the Yakuza, and a guy with a beard and a Jesus-complex who kills people for no reason. 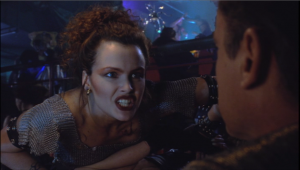 The corporation-run world he smuggles within is constantly at odds with a rebellion, as is par for the course in futuristic dystopian societies.  There’s also a disease called NAS (half-man, half amazing?) that is killing people, but simply mentioning the malady exists is about as invested as the characters get into that subplot. 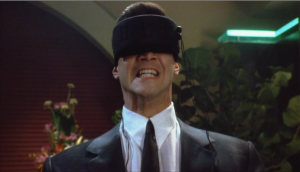 Being a technological thriller set in 2021, there are some unavoidable, yet still laughably bad predictions of where the Internet and computers in general would be in the future.  One of the first things a modern audience might notice is that Keanu’s brain’s storage capacity is less than an iPod (80 GB).  Somehow he obtains a “memory doubler” but that doesn’t help since the information he’s transporting is 320 gigs.  This leads to a lot of Keanu gritting his teeth and having seizures while he’s suffering life-threatening “synaptic seepage” from an overfull “wetwired memory implant”.  This “seepage” really provides the only immediacy to the needlessly mysterious plot since he will die if the receiving code isn’t found and the data isn’t removed.  Unfortunately, the vague timeline given by the expository dialogue is “a couple days”.  There are some other hilarious gems of computer ignorance, including a super smart dolphin who “cuts through hard encryption like a knife cuts through butter” and an anti-climactic CGI scene where a digital analog of Keanu “hacks his own brain”.  What’s a bit surprising about these head-scratchingly stupid moments is the screenplay was written by cyberpunk pioneer William Gibson (Neuromancer) from his own story.

Speaking of CGI, there are some fascinatingly odd The Lawnmower Man-esque journeys through cyberspace that have no basis in logic or reason.  For example, accessing a hotel room’s fax records necessitates a VR interface that involves finding and unfolding a map, a pyramid-shaped Rubik’s Cube, and a lot of awkward hand movements.  That being said, unlike other movies that have clunky, animated representations of computer interfaces (Hackers and some movie called Masterminds that I accidentally watched on tv, to name a few), the hacking scenes in Johnny Mnemonic actually have some artistic value.  They may be stupid and ugly, but they’re stupid and ugly in an almost charming way.

The only truly positive aspects are the interesting visual motfis throughout the movie.  The set design and props have an appealing Asian-inspired, futuristic look while the scenes set among members of the rebellion look appropriately grungy and cluttered.  Costuming

and make-up are a touch silly, but at least provide some semblance of imagination and verisimilitude to a film that’s lacking both when it comes to virtually everything plot-related.

On the “so bad it’s good” scorecard, there is the famous ‘room service’ monologue where Keanu lovingly gives his most Nic Cage-iest spin on how inconvenient all the people trying to kill him are.  It’s a strange piece of writing and an even stranger performance as “John Smith” gesticulates wildly and screams at nobody in particular about the benefits of expensive hotels.   Also, this article would be remiss if it didn’t mention the scene where Dina Meyer asks him, “Well, you got parents and stuff?”  and he replies with a screaming, “You got parents and stuff?!”

Can I say “everything”?  The overall story is muddled and the scene-by-scene writing doesn’t help to clarify anything.  The character relationships are confusing and undefined, while nobody’s individual motivations quite stand up to any logical tests (Why does Pharmakom hire both the Yakuza and Street Preacher to hunt down Keanu?  Why do the rebels need to send the information to Newark instead of just posting it over the Internet?  What’s Udo Kier’s deal?)  Because we don’t find out what the data in his head actually is until the very end, there’s little immediacy or importance to the whole affair.  The only takeaway is that we hope Keanu Reeves doesn’t die, but there’s no reason to hope that because he’s kind of a dick the whole movie.

To make matters worse, the acting is atrocious.  While the clip above shows that Keanu clearly earned his Razzie nomination, he’s not entirely to blame.  Part of that has to be attributed to Gibson’s clunky dialogue and Robert Longo’s inept direction.  Dina Meyer and Keanu Reeves’ chemistry especially is awkwardly shot, with pauses between each line of dialogue that make Twilight look like an Aaron Sorkin joint. Tellingly, this was Longo’s only feature film.   Even though  it’s hard to tell if Keanu Reeves’ alternatingly over-the-top and uncomfortably monotonous performance is tongue-in-cheek, it seems that Dolph Lundgren is the only person who knows this movie requires the campiness to be turned up a bit.  However, he’s neither funny enough nor featured enough to really be worth calling out.  I also just realized that we talked about a Lundgren vehicle in last week’s feature… and similarly “praised” his acting prowess.  Weird.

The worst sin is the mind-boggling editing.  There is little to no sense of space, nor any A-to-B relationships between consecutive actions on screen.  One example that really hammered the amateurism home is a scene where a character known only as Baldy is hunting a hiding Keanu Reeves in an abandoned lot between buildings.  It cuts between him searching, Keanu hiding, and Ice-T watching the whole thing happen with another Lo-Tek.  Eventually the nameless Lo-Tek inexplicably tells Ice-T to “watch out” for something that’s never outlined and he sort of trips while standing still for no reason.  We see a quick shot of his foot kick out a piece of rubble which falls and makes a noise.  Baldy turns to the noise and shoots.  A bullet hole appears in the Lo-Tek’s head.  A wide shot shows his body fall from the 5th story of a building.  It was never clear that the Lo-Teks were on a different level than the other characters, let alone on the roof of a building far enough away that a from-the-hip headshot would be nearly impossible.

Another scene has Dina Meyer rescue Keanu from a forced head-ectomy (so the villains can kill him and preserve the data).  There’s a full-on chickfight as she gets into fisticuffs with one of the villain’s bodyguards.  70% of this fight is portrayed offscreen while we watch Keanu just stand there stupidly pointing a gun.

No, not at all.  Outside of some interesting visuals this movie is an unengaging mess.  It would be “so bad it’s good” if the action scenes had any bite at all or if the plot made any sense.  As it stands now, it’s a slog to get through with less than a handful of ironic laughs to be had.  Also, the less said about the apparent push to make “Hit me!” a catchphrase, the better.

All Images courtesy of Tristar Pictures