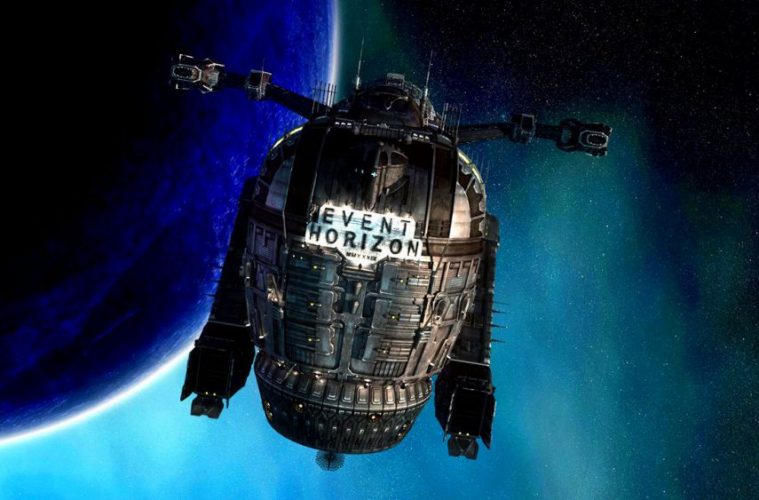 In 1997, a movie was released. But not just any movie. It was a movie so twisted, so evil and so totally terrifying that it would go on to become not only a celebrated horror movie, but an absolute cult classic. That movie was ‘Event Horizon’.

Made in the United Kingdom by ‘Mortal Kombat’ director Paul W.S. Anderson (Who later became well known for the ‘Resident Evil franchise’, featuring his wife Milla Jovovich) (And made on a decent budget of $60 million), ‘Event Horizon’ features a stellar cast – Sam Neill, Laurence Fishburne, Kathleen Quinlan, Joley Richardson, Jack Noseworthy, Jason Isaacs, Richard T. Jones and Sean Pertwee. The movie also features a score from ‘Lethal Weapon’ and ‘Die Hard’ composer Michael Kamen. Written by Philip Eisner (A man Hollywood seriously needs to hire in a big way again, for his genius in writing! Have him write a Marvel movie!), who brings it all together. With that level of star power, you could only expect the best. And that’s what you get.

The Event Horizon is a state-of-the-art research ship that travels through space and time, helping its crew to discover hidden secrets of the universe, by instantly creating portals to other worlds among the stars, thanks to spectacular technology enabling it to create black holes all of its own. But when it mysteriously vanishes, a 7-year hunt takes place to find it. However, after the 7-year disappearance, the Event Horizon instantly reappears back in the point from which it was lost without trace. With the crew of a rescue ship sent out to investigate, the Event Horizon’s creator leads the team onboard his ship, to find out just what happened those 7 years ago. Finding the ship’s crew dead, and forced to take refuge after their own ship is destroyed, the rescue team are thrown into a desperate mission to get back home. As they fight for survival, the ship is about to share its secrets, and is not ready to let the crew go without a fight to their deaths, as it dawns upon every soul onboard just where this ship vainshed to 7 years ago, and what it has brought back with it.

‘Event Horizon’ is hands down the greatest horror movie ever made. In this writer’s opinion, at least. Filled with incredible special effects, dazzling set designs and scares better than anything I’ve ever seen, this is the horror movie that changed the way I view anything in the genre. Incredibly disgusting and blood thirsty, the movie spills out its evil like Linda Blair spews pea soup. The haunting thrills, the sudden jaults, the several unbearable death scenes, ‘Event Horizon’ refuses to hold back. Even with disgusting images flashed through our senses of what happened to the ship’s crew, by way of video footage, is incredible and stomach turning. The whole movie has one intention, and that’s to scare its viewer to the core. I remember my first time seeing the movie, as a 15 year-old teenager, after snapping up the VHS tape from a movie store. I ran straight back to the TV as fast as possible, to pop on the tape. And from the very start, I felt a fear rush through my body, as those opening credits pounded. As the movie began, I watched with hesitation, as I realized just what might have happened to this ship. But as things raced forward, I start to wimper, until the final half hour, when the most lavish and awful death scenes started to pump from the screen with rage and horror. I couldn’t believe what I was watching. This was a brutal experience for me. After the movie ended, I felt shakes through my arms and legs as I reached for the tape. I put it back into its case, and eventually put it under my bed, to keep it away from me. That same night, I woke up screaming, begging not to be murdered. And right then, I knew I’d stumbled across something very special.

After giving the tape away the first time around, I then upgraded to a DVD copy a couple of years later. Determined to give it another go, I found myself still just as terrified as the first time, but because I now knew what was coming, I felt a little easier in my enjoyment of it. The gore, the violence, the utter depravity, it all still made me cry out, but this time in the way you scream out when you watch your favorite horror movie. That sense of real evil and excitement that we get only from these movies. I watched it right to the end, and then cheered as the incredible ‘Funky Sh*t’ by Prodigy blared from my television. What an absolutely awesome thrill ride. And the plot this time around felt far more pronounced to me, thanks to knowing what was happening. The twists and turns in the story are what make this movie so much greater than most horror movies I’ve seen. The intelligence, the science, the seriousness in which the cast bring. Not only explaining what the ship can do, but where it had been, and how brilliantly handled it all is. Most other people would destroy a story like this, but the writer Philip Eisner handles it beautifully, not giving up all the good stuff at once, and instead keeping us on the edge of our seats, as the movie follows a natural growth by becoming bigger and scarier with every scene. And sided with director Paul W.S. Anderson, they deliver something that we don’t see much of anymore. Without spoiling for those unlucky enough not to have seen it by now, there is one scene I will mention… Sam Neill’s character, Dr. Weir (Event Horizon’s creator), is having a morning shave. As he takes the razor to his throat… BOOM! A shutter opens! And for a split second, you get that “Oh my God! He could have cut his throat!” feeling, before realizing that you’re the one who jumped, not him. That scene is pure genius. And that’s the kind of thrills ‘Event Horizon’ delivers. Well crafted, brilliantly designed and written with a wicked sense of humor. And with Michael Kamen’s fantastic score (With additions from Orbital, and end titles from Prodigy, taken from their classic album ‘Fat Of The Land’), adding even more supense and chills throughout, it just couldn’t be a better movie.

Some criticism has always been levelled at the performances from the stars. While I will agree that more time has been paid to some more than others, I find the performances an absolute joy. Laurence Fishburne is great fun, as the head of the research team, bringing his classic macho strength into much of the movie’s action, but covering his emotional dialogue very well too. The ladies, Kathleen Quinlan especially, are terrific, bring the needed warmth to the crew. Quinlan shines bright, as a mother haunted by images of her dying child. She has never been better in a movie. Sean Pertwee, Jason Isaacs and Richard T. Jones provide the few scenes of light-hearted comedy, that every horror movie must have. Jones especially has a stellar scene late in the movie, but again at the risk of spoiling it for anyone who’s yet to see it, I’ll just say that in a movie filled with science and blood, his character in that scene is a lot of fun, for just a brief minute. Jack Noseworthy has some of the movie’s greatest scenes, especially a near-suicide sequence that puts shivers down my spine. He’s a wonderful character. A little movie trivia – Both Kathleen Quinlan and Jack Noseworthy appear in Kurt Russell’s awesome ‘Breakdown’, of the same year, 1997. Above all in the movie is the most central character, Dr. William Weir, the creator of the Event Horizon. Sam Neill is easily one of the world’s greatest and most prolific actors, wth a career spanning five decades. Also starring in ‘The Hunt For Red October’, ‘The Final Conflict’ (‘Omen III’), ‘Dead Calm’, ‘The Piano’, ‘Sirens’ and one of my all-time favorite movies, ‘Bicentennial Man’ (With the late great Robin Williams in the lead role). But above all, he is the star of the greatest movie ever made, in my opinion, ‘Jurassic Park’, which brought him into the hearts of every geek in the world. Eight years later he would star in the movie’s second sequel ‘Jurassic Park III’. Dr. Weir is what makes ‘Event Horizon’ spectacular. Weir is a brilliantly crafted character. With a tragic history of his wife’s suicide, Weir has now become a haunted loner, with his mind now firmly set on reclaiming his creation. But as the crew fight to stay alive and escape the ship’s evil intentions, Weir becomes increasingly obsessed with the ship. As events unfold, Weir proves to be the movie’s central force, delivering ‘Event Horizon’s now infamous and beloved finale. I personally have never been more terrified that those finale scenes, which provide spectacle, blood and fire. Brilliantly handled by director Anderson and the rest of the cast, but held purely together by Sam’s wonderful performance.

Perhaps not seen by as many people as it should be, and not as appreciated on first release as it is now, ‘Event Horizon’ is THE horror movie event, the ultimate go-to blockbuster for thrills, gore and absolute mayhem. With it’s story, actors, direction and stunning score from Michael Kamen, alongside the incredible set designs and special effects, ‘Event Horizon’ is impossible to beat in its genre. If you haven’t seen it, now is the time, as it celebrates twenty years this year. Happy 20th Birthday to one of the greatest movies ever made!