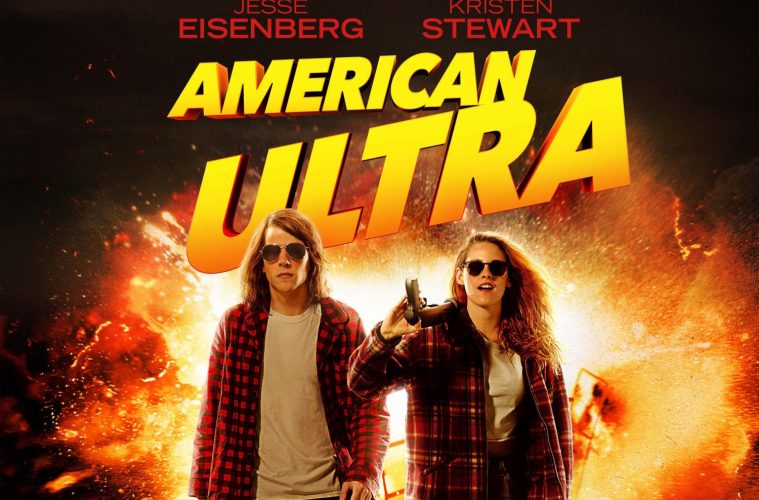 ‘American Ultra’ from 2015 is a movie I’d been meaning to see. However, with so many movies being released every year, it’s hard to keep track of everything. And so this wonderful action gem passed me by for so long.

Written by Max Landis (son of John Landis), who also wrote ‘Chronicle’ and the horribly underrated ‘Victor Frankenstein’, ‘American Ultra’ centers on Mike and Phoebe (Jesse Eisenberg and Kristen Stewart) a pair of loved-up stoners, who become embroiled in a deadly game of cat and mouse, as Mike’s forgotten history as a CIA hitman comes back to haunt them both. Forced to fight for survival, Mike’s skills of the past are put to the test as he brings the pain to a deadly team of assassins sent to murder him and Phoebe. But is Phoebe who she says she is? Or is she too hiding a deadly secret?

‘American Ultra’ is wholly unoriginal. How many times have we seen the whole assassin/agent/soldier with wiped memories/amnesia story played out on screen? ‘The Bourne Identity’, ‘Universal Soldier’, Total Recall’, ‘The Long Kiss Goodnight’ etc… Trust me, it’s been done. And better. Those four movies are the best of the bunch. But what ‘American Ultra’ brings is chaos. Absolute anarchy. The story is unoriginal, but the telling of it is something spectacular.

I’ve never been a fan of Jesse Eisenberg, somehow his style of acting and presence never appealed to me. I always find him terribly miscast. But here, he’s pure gold. Mike is such a fun character for a movie like this. He’s sweet, funny, gentle, an absolute pothead, and as things turn out, he’s also a staggering fighter. While some of the fight scenes suffer from bad editing, it’s great to finally see Eisenberg unleashed in a role he’s perfectly suited for. And Kristen Stewart is… well… hot. Not to put too fine a point on it. She doesn’t add a lot to the action, but she’s still fun to watch. For the rest of the cast, Bill Pullman is very underused, Connie Briton never gets off the chain, but Topher Grace is an absolute joy as the movie’s central villain of sorts. Grace is one of those actors who you either love or hate. I’ve always loved him. There’s something so fun about him, from how he looks to his high-pitched voice, he’s got that something special. He was terrific in ‘That 70’s Show’, and he brought a lot of fun to ‘Spider-man 3’. And he does the same here.

For my money, there’s three major stars in ‘American Ultra’ that it can’t survive without… Eisenberg, Grace and the magnificent action scenes. Ranging from a blood-soaked police station shootout to a dazzling finale which includes a car covered in fireworks, the action is incredible in this movie. The fight scenes needed a little work, but to see Eisenberg finally kicking some ass and stabbing someone to death with a spoon is wonderful. The soundtrack also adds a lot of fun to the action, with offbeat rhythms and a handful of great songs popping up.

Director Nima Nourizadeh (from ‘Project X’… Another movie I’ve been wanting to see!) does a stellar job of bringing together the insane action scenes and the movie’s cartoon style graphics and humor. While not someone known for action cinema, Nourizadeh delivers a lot of fine camera work, especially during the final 20 minutes. And for all the movie has to offer, it is the action that makes the movie what it is. A romping, stomping, joyous action movie with plenty of action, gore, comedy and quirky visuals to thrill the senses. You must see ‘American Ultra’.