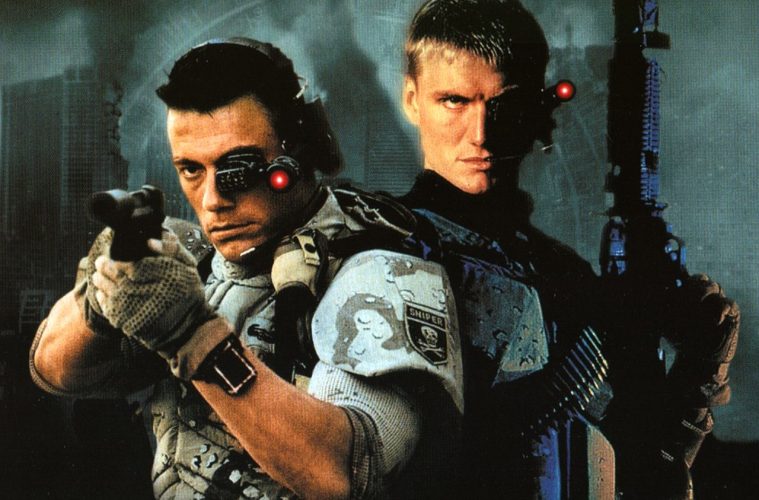 In the late 1980s and 1990s, action movie stars ruled the world. Schwarzenegger, Stallone, Norris, Willis etc… Instantly recognizable by even only their surnames, these men rocked cinema to its knees with their countless action-packed thrillers. And among those legends were two of action cinema’s most awesome titans, Dolph Lundgren and the incomparable Jean-Claude Van Damme. Two absolute kick-ass Gods of action cinema, Van Damme and Lundgren in their prime is still to this day something to be greatly adored. While I hold Van Damme in my top 5 movie stars of all-time (The greatest martial arts movie star ever on screen, in my opinion), I’ve also always had huge love for Dolph Lundgren, thanks to his no-nonsense attitude, dark sense of humor and his brutal fighting skills. So you can imagine my joy when these incredible fighting machines were put together for the first time, in 1992’s ‘Universal Soldier’. To celebrate its 25th anniversary this year, it’s fitting to look back at just how amazing this action classic is, and the impact it’s had on future action movies.

‘Universal Soldier’ was directed by Roland Emmerich, the future master of disaster who would go on to give us the immortal classic ‘Independence Day’ (One of the greatest movies ever made), its wonderful sequel ‘Independence Day: Resurgence’ and a host of other major big screen blockbusters such as ‘Godzilla’ (My favorite Godzilla movie), ‘2012’, ‘The Day After Tomorrow’, ‘White House Down’ and the science fiction masterpiece ‘Stargate’ (Which led to the Stargate TV shows). And although not on the scale of those blow-em-up blockbusters, you can see the love of spectacle and that vision for action the joyful Emmerich has, in almost every scene of this movie. Coming four years before ‘Independence Day’, ‘Universal Soldier’ showcases Roland Emmerich as a perfect action filmmaker, with a great love of chaotic violence, visual effects and humor. Although he’d made other movies before, ‘Universal Soldier’ was the movie that launched him into the big leagues of action cinema. And all these years later, he’s still a dazzling filmmaker, and a wonderful man too. Mixing Van Damme, Dolph Lundgren, director Roland Emmerich and producer Mario Kassar (‘Terminator 2: Judgment Day’, ‘Rambo: First Blood’, ‘Cliffhanger’, ‘Total Recall’ etc…) together could only ever produce magic.

‘Universal Soldier’ is centered around Luc Deveraux (Van Damme) and Andrew Scott (Lundgren), two Vietnam soldiers who fight the war side by side. But when Scott becomes a brutal psychopath who begins murdering innocent Vietnamese citizens, Deveraux stands up to his friend in a bloody battle, and they gun each other down dead. When a secret government group begins the “UniSol” program, the bodies of dead soldiers from the war are stockpiled, to be reanimated and used as future weapons against terrorism. Thirty years later, Deveraux and Scott are reawakened and placed together once again, with memories supposedly wiped, and armed with superhuman strength. But not all goes according to plan, as these new “Universal Soldiers” begin to regain select haunted memories of a time gone by, becoming who they used to be, and will once again go to war… With each other.

Everyone knows that a Van Damme or Dolph Lundgren picture will deliver almost every single time on pure thrills and insane action. But pitting these legends together, as brutal enemies, in a movie directed by the man who would go on to give us ‘Independence Day’? Oh yes please! ‘Universal Soldier’ may be another in a long line of cyborg/ robot sci-fi movies (‘The Terminator’ and ‘RoboCop’ are heavy influences), but thanks to these two awesome martial arts stars, it becomes more than just another sci-fi action movie. It’s a tour de force of incredible fighting skills and stuntwork, with Van Damme and Lundgren constantly reigning down heavy pain upon each other. The final fight is especially spectacular, when the two mighty warriors face each other one last time, with high kicks and one-liners, against the backdrop of fire and rain. Even before the wonderful finale is the now classic prison bus chase atop the Grand Canyon, as Deveraux is under heavy grenade fire from the vicious Scott. Rarely has a chase like this been seen in an action movie. The entire movie captures that fantastic feel of the ultimate chase movie, as Deveraux is constantly by Scott. Think ‘The Hitcher’ meets Van Damme’s ‘Nowhere To Run’ and Dolph Lundgren’s ‘Army Of One’. It’s easily one of the most exciting action movies ever made, thanks to it’s relentless chases and fights between the two action kings.

Where ‘Universal Soldier’ tends to draw criticism is in its acting. Many feel Van Damme and Lundgren play inside their comfort zones, choosing to kick ass and whip out one-liners, rather than attempt to take the story seriously in any way. I disagree with that. Van Damme as Deveraux gets to show a lighter and more emotional side to his screen persona, as Deveraux is a man from another time lost in his modern surroundings, with a need to know just who he is, and what became of his family. Van Damme plays the role perfectly, with all the emotion and depth needed for a movie like this, without falling into the trap of going overboard and forgetting that he’s in a 90s sci-fi action movie. Lundgren also gets to shine, bringing out all that craziness we love him for, as he roars his way through the several action scenes, and even injects plenty of terrific humor into an evil killing machine. Dolph Lundgren is a brilliant action star who rarely gets the credit he deserves, and he shows his wonderful skills never better than here. Among a small supporting cast is Ally Walker who plays Veronica Roberts, a feisty TV reporter with a bad attitude and a love for cigarettes. Veronica is instrumental in much of the movie, as she is the only help Deveraux has in trying to survive Scott and find his family. With many of the movie’s funny scenes, including an epic diner fight and an awkward search of Deveraux’s body for a tracking device, Walker is a lot of fun as Roberts, and balances the movie nicely, between brutal action and light-hearted drama. The cast of ‘Universal Soldier’ would never win Oscars, but anyone who thinks Van Damme, Lundgren and Walker could have played their roles better is wrong.

With any action movie, there are several important factors aside from the cast and the action. Those are soundtrack, editing and special effects. The score for ‘Universal Soldier’ was written by Christopher Franke, who sadly has never really been given much of a chance on the Hollywood scene, aside from many stints on TV’s ‘Babylon 5’. But anyone who knows this movie knows it has one of the best scores from the 1990’s action movie canon. That main title theme by itself is spectacular, capturing the excitement and strength of both the action scenes and the thrill of Van Damme and Lundgren together on screen. The score through the Grand Canyon chase and fantastic finale is especially brilliant, again using the title theme, but ramped up to an awesome level. The “I’m alive!” scene is easily one of my favorite scenes from any action movie ever made, and that main theme serves to add so much more fun to it, as Van Damme delivers those high roundhouse kicks with absolute glory. Franke deserves so much more work. The editing and special effects are also fantastic, with Roland Emmerich’s stunning action sequences edited at breakneck speed, and the fights are stunningly shot and edited, with both Van Damme and Lundgren coming out of the movie looking more awesome than ever. And the special effects are terrific, with plenty of fire and explosions to rock your sound system. The opening scene is especially brilliant to look at. For a movie not made with the kind of budget movies have these days, ‘Universal Soldier’ seriously delivers on every level, with two of action cinema’s greatest icons duking it out along with wonderful chases, a terrific score and plenty of firepower. What more could you ask?

‘Universal Soldier’ is now 25 years old, and its legacy is far greater than many will realize. Teaming kick-ass action stars together was a fairly unused idea in the 1990’s, with only a handful attempting it, such as the classics ‘Tango And Cash (Sylvester Stallone and Kurt Russell) and ‘Demolition Man’ (Stallone again, now with Wesley Snipes). Thanks to those movies and ‘Universal Soldier’, we now have the likes of ‘The Expendables’ trilogy and the Fast And Furious’ franchise. And as a movie by itself, ‘Universal Soldier’ has spawned many sequels, including the brilliant ‘Universal Soldier: The Return’ (Featuring a spectacular performance from another martial arts God, Michael Jai White) and the two recent movies ‘Regeneration’ and ‘Day Of Reckoning’ reteaming Van Damme and Dolph Lundgren in their original roles. If you haven’t seen ‘Universal Soldier’, you must. Even if just to witness Van Damme, Dolph Ludgren, Mario Kassar and Roland Emmerich together on one movie!