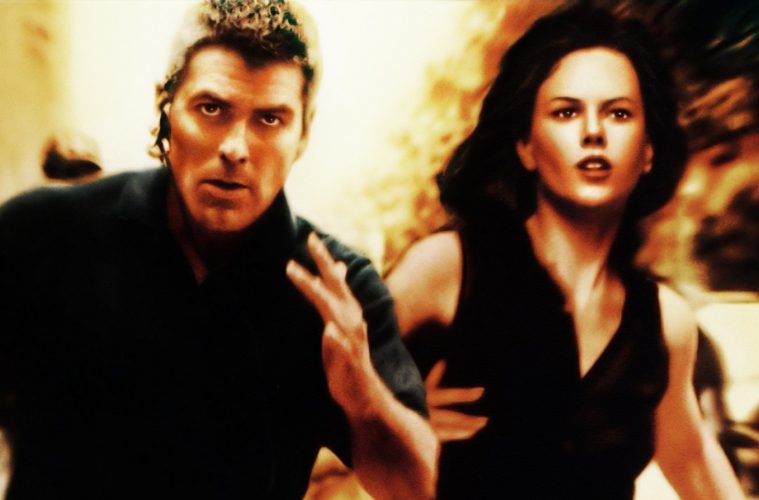 Celebrate 20 Years Of DreamWorks With ‘The Peacemaker’

In 1997, great history in Hollywood was made, as movie giants Steven Spielberg, Jeffery Katzenberg and David Geffen joined forces to create a brand new filmmaking studio, DreamWorks SKG. Twenty years on, and the now iconic ‘Boy On The Moon’ has delivered many classic movies, both live action and through their DreamWorks Animation studio. With titles like Tom Cruise classics ‘Collateral’ and ‘War Of The Worlds’, alongside ‘Saving Private Ryan’, ‘Shrek’, ‘American Beauty’, ‘Kung Fu Panda’ and ‘Gladiator’ under their roof, DreamWorks made a massive stamp on the world of cinema. And as their legacy continues to reign supreme under new partnerships with several studios, and delivering spectacular box office hits like the magnificent multi-billion dollar ‘Transformers’ franchise from Michael Bay (With Spielberg producing the movies), DreamWorks show no sign of slowing down. But let’s go back to the very first feature film to leave the doors of DreamWorks SKG and hit the big screen, the glorious and sadly largely forgotten action masterpiece ‘The Peacemaker’ from 1997.

Starring Oscar winners George Clooney and Nicole Kidman, and directed by ER’s Mimi Leder, ‘The Peacemaker’ centers on a nuclear expert Dr. Julia Kelly (Kidman) and Special Forces Colonel Thomas Devoe (Clooney) who team up to track down a vengeful terrorist who is assigned a mission by his comrades to take a nuclear bomb to the the United Nations in New York City and detonate it. As Devoe and Kelly race against time to save NYC from annihilation, they are forced to fight for their lives against countless enemies out to ensure that America suffers a devastating blow that will criple the country forever.

‘The Peacemaker’ has long since been a movie I have championed to be one of the finest action thrillers ever put to film, with its two glorious leading stars (I’m a major fan of both Nicole and George) and Mimi Leder’s spectacular directing. Leder at that time was reknowned for breaking into the action movie genre as a female director, and recieved great praise for her work, leading her to also helm the fantastic DreamWorks blockbuster ‘Deep Impact’ the following year. One of the most powerful women in Hollywood, Mimi Leder deserves more plaudits and better oppurtunities these days. The story is something that resonates across the world, as fear of nuclear terror rises in the wake of modern terrorism. The movie’s leading attacker, Dusan Gavric (Played by the brilliant Marcel Iures) is not only perfectly cast, but also perfectly written. A man who has lost his family to war, Gavric is converted to terrorism, believing America to be the reason behind his family’s deaths. Most movies of this type rarely give so much craft and script to a character like this, but ‘The Peacemaker’ stands above other nuclear warfare movies for not only its heroes, but also its villains. Iures is wonderful, absolutely. George Clooney is total perfection for a role like this. With TV’s ER (And the connection with Leder, having worked on that show with her) and the cult classic ‘From Dusk Till Dawn’ (From 1996), George was already a wonderful screen star, but Devoe would give him his most energetic role to date. Mixing his brand of humor and suaveness, with kick-ass action skills, the great Mr. Clooney has simply never been greater. Nicole Kidman had long since been known for her energy and brilliant acting in past movies (Her turn as Chase Meridian in Batman Forever will live in my heart forever), but like George, she is also pushed to new limits, as she runs right alongside the leading man, throughout the movie’s several incredible action scenes, just like the amazing leading lady she is. Tough, fearless and full of fun, Nicole is for me the greatest female actor in cinema, thanks to her total diversity in roles and her wonderful movie star beauty. Magnificent woman.

While action is to be expected of a movie like this, ‘The Peacemaker’ has a different kind of action that I’ve seen in anything else. There’s a realism and urgency, that is mixed with a James Bond type of adventure, that just makes the action here so spectacular. From the pounding opening sequence of a train hijacking, to an absolutely glorious foot chase through NYC (The best foot chase I’ve ever seen in a movie), the action here is of a standard that has never been repeated anywhere else. While many movies in the action genre to feature similar scenes, ‘The Peacemaker”s action scenes have such an artistic and graceful style about them. There’s incredible visuals, but mixed with a pace that allows both the action and lead stars to shine. The movie’s most popular scene, a insanely awesome car chase with Clooney and Kidman trying to evade a group of vicious assassins, stands as one of the finest car chases anyone could see. With stellar moments such as Clooney’s character reversing over the roof of an assailant’s car and and both Clooney and Kidman fleeing from an exploding Mercedes, the chase is a staggering example of driving skills and stuntwork, and also displays how a woman can bring a georgous finesse to action that most men cannot deliver. The whole movie features thrills that very few other movies can offer. The foot chase I mentioned is my own personal highlight. Clooney, appearing as every inch the action star, running atop cars in heavy New York traffic, backed by the FBI, seeking his target, and even bonnet sliding. And Nicole frantically driving through the streets to stop the impending nuclear disaster. It’s a magnificent scene that, even after twenty years, still blows me away.

With most action movies, we need a musical score to propell the thrills to an even greater height. And who better to do that than the one and only Hans Zimmer? Hot off classic movies like ‘The Lion King’ and ‘Crimson Tide’, Zimmer delivers some of his finest work here. While he manages to capture the emotion of the movie and its tones, it’s the action scenes that benefit the most from his music. The car chase pops to mind, along with the fantastic opening sequence, but again, it’s the epic foot chase finale that brings the movie’s most exciting sounds. The Zimmer sound is unmistakable, and even without knowing he’s involved, you would know it’s his work, especially during that finale. Big, bold and angry, the score adds so much more urgency to the finest chase movie ever made. And that foot chase holds magic that Zimmer has rarely matched, even since. While movies can work and deliver tension and excitement without much of a score, ‘The Peacemaker’ benefits greatly from it.

Since the brutal and unforgivable attacks of September 11, 2001, movies like ‘The Peacemaker’ have become a sore subject. With depictions of terrorists and their actions, alongside any visuals of New York City, action movies centered on terrorism became too much for people to stomach. And while some filmmakers and TV shows continued to focus on such acts afterwards (Season 2 of ’24’ as example), action thrillers and adventures using terrorism as its centerpiece have become almost extinct. There are some that still make it through the net, such as the incredible and glorious ‘Olympus Has Fallen’ (and it’s horribly underrated sequel ‘London Has Fallen’). But terrorist action movies made purely for entertainment are not in fashion anymore. Which makes ‘The Peacemaker’ pretty much the last of its kind. But for anyone like me, who still adores a great action movie and seeing the good guys triumph over unbeatable odds, ‘The Peacemaker’ is not only a masterclass in how to do it, but also a display of just how great a action star George Clooney is, and how brilliant an actor Nicole Kidman is. And with the focus switching to female film directors of late, maybe it’s time to celebrate the fantastic work of Mimi Leder on one of action cinema’s greatest entries? I’ve no doubt that DreamWorks will hold many large celebrations in hunor of their 20th Anniversary this year, but I sincerely hope that they don’t forget to give ‘The Peacemaker’ the love, respect and praise it absolutely deserves. One of the most wonderful and exciting action movies ever made, that helped to launch one of the world’s biggest and most successful film studios. Here is that first glimpse of DreamWork’s 20-year legacy. And may we hope for many more years.