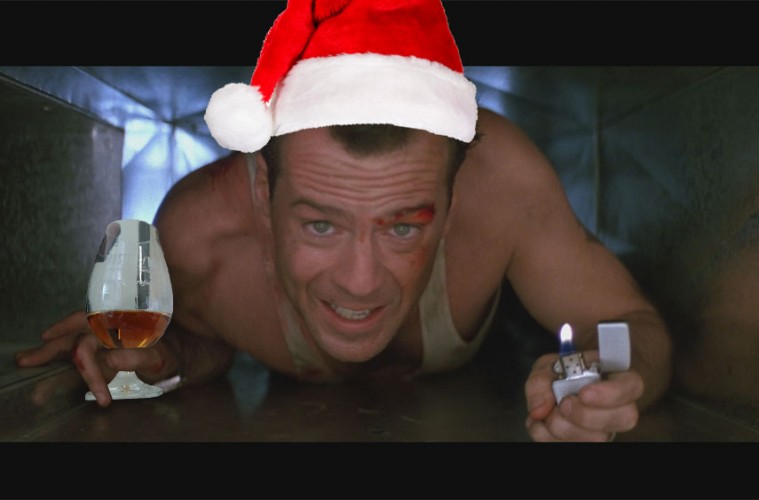 ‘Tis the season to be jolly. And a total bad ass! Every year, we all enjoy our favorite festive movies… ‘How The Grinch Stole Christmas’, ‘The Santa Clause’, ‘Elf’, ‘It’s A Wonderful Life’, ‘Miracle On 34th Street’ etc… But how about the countless brilliant movies set around the festive holidays that don’t center on anything Christmas related? Comedy classics like ‘Gremlins’, ‘Home Alone’, ‘Plains, Trains And Automobiles’ or masterpieces from film makers such as Stanley Kubrick with his wonderful double hit of ‘Eyes Wide Shut’ and ‘Full Metal Jacket’. There’s all kinds of festive crackers to keep everyone happy over the holidays. And there’s none happier than us action fans…

There are many lists online from people counting down their favorite festive action movies. But while they stick somewhat to the topic, they tend to include a lot of classics like ‘The Last Boy Scout’ (Which I absolutely adore, and will be sure to cover in great detail for its 25th anniversary next year!), ‘First Blood’ and ‘Behind Enemy Lines’. But to me, those movies say little, to almost nothing, about Christmas, you’d barely even notice they are set around the holidays. So here is a list of what I believe are the 10 ultimate Christmas action movies, the ones I break out every year and play until Santa Claus himself gets so angry he puts me on the naughty list.

Starring Ben Affleck as a newly released prisoner who pretends to be his dead former cell mate, in order to court the mysterious and stunning woman (Charlize Theron) who had been contacting his friend from the outside, ‘Reindeer Games’ is a terrific and sadly forgotten action thriller from the late great action director John Frankenheimer (‘Ronin’). When the fantasy turns deadly, the convict finds himself in a festive nightmare, leading to some fantastic set pieces, including a daring casino robbery, with a little help from Santa. Featuring everything from spectacular explosions and shoot outs, to Charlize Theron topless in a swimming pool, this is one movie that will get your pulse racing at Christmas.

Geena Davis and Samuel L. Jackson team up in this incredible action blockbuster, one as an amnesiac housewife who doubles as an assassin, and the other a divorced private detective hired by the killer to hep her figure out her past before her past kills her and her family. From ‘Die Hard 2’, ‘Cliffhanger’ and ’12 Rounds’ director Renny Harlin and legendary ‘Lethal Weapon’ creator (And director of ‘Iron Man 3’, also writer of ‘The Last Boy Scout’ and many other action classics) Shane Black, you’d be right in thinking that ‘The Long Kiss Goodnight’ must be an insanely awesome action-packed thriller. It really is. And Geena Davis has never been better.

Paul Bettany stars as the Archangel Michael who falls to Earth and travels to a small town to protect a pregnant young woman on Christmas Eve, who is about to give the birth to the world’s new savior. With God giving up on mankind and sending an army of angels to destroy the world, it’s up to the fallen angel and a band of customers in a diner to save humanity from God’s wrath and bring about the new world order. ‘Legion’ is literally mind blowing,, as the spectacular action bounds on relentlessly, to an incredible finale. Seriously one of the best action movies to emerge in the new millennium. It also led way to a TV show spin-off series ‘Dominion’.

While two serial killers are being transported on a passenger 747 jet, they escape and murder the marshals assigned to them. While is instantly taken care of, the other – a notorious womanizer and cold-blooded killer (Played brilliantly by Ray Liotta), attempts to take control of the plane and crash it before it reaches its destination. Also starring Lauren Holly as the brave air stewardess who battles the violent killer, ‘Turbulence’ is possibly the most festive action movie on the list, with something Christmassy in almost every shot. It’s a wonderful thrill ride, that again sadly has been long overlooked. And while many believe ‘Goodfellas’ to be Liotta’s finest performance, his role as Ryan Weaver as long been my favorite of his.

After the glorious ‘Bad Boys’, ‘Independence Day’ and ‘Men In Black’, Will Smith yet again proved why he is one of the best movie stars in the world, when he reunited with Jerry Bruckheimer for this heart-racing blockbuster, starring as a lawyer who is forced to go on the run, after he is targeted by a group of secret high-tech killers who want him dead for possessing information that could bring down their organization. Gene Hackman also reunites with Bruckheimer and ‘Enemy Of The State’s legendary and greatly missed director, the wonderful Tony Scott (All three made the epic ‘Crimson Tide’ together). A must-see action movie, insanely exciting.

Turning 20 years old this year, ‘Money Train’ stars Wesley Snipes and Woody Harrelson for the second time together (‘White Men Can’t Jump’ being the first), playing cops and foster brothers who fall in love with the same woman (Jennifer Lopez, on her rise to fame), while spending their days protecting the passengers of the New York Subway system, and working part-time on a security team for the revenue collection train, AKA the “Money Train”. But with the girl, money problems and family relations coming between them, it’s only a matter of time before one of them snaps and decides it’s time to take a speeding train ride through NYC’s underground for the ultimate pay day. ‘Money Train’ is absolutely glorious. The action, the special effects, the comedy between the stars and Jennifer Lopez being dazzling (And also topless… As if I wouldn’t mention that!). It’s long been one of my favorite movies, the finale is incredible, it needs to be seen by everyone. And that Mark Mancina score is just stunning. A perfect blockbuster for the festive season.

Tim Burton’s opus, his masterpiece, his finest movie to date. In my opinion, at least. Batman Returns carries on Burton and Michael Keaton’s dark take on the Dark Knight, after their first smash hit ‘Batman’ movie in 1989. This time, Batman/ Bruce Wayne comes up against two iconic villains, Penguin (Danny DeVito) and Catwoman (Michelle Pfieffer), as they plot to bring Gotham to its knees, with both having a dastardly motive for vengeance. As the action hurtles on, ‘Batman Returns’ constantly delivers, thanks to the brilliant performances (DeVito is very much the star here, playing Penguin to a level that no one else could ever better!), the gothic sets and the visual effects which still remain some of the finest a Batman movie has ever featured. A masterclass in film making, a movie that must make your Christmas viewing list.

Bruce Willis dons the bloody white vest for the first time, as he takes on his first major movie role as John McClane, an ordinary cop from New York City, who travels to Los Angeles to visit his estranged wife. However, not everyone is home wrapping gifts on Christmas Eve, as a group of dastardly villains (Headed up by Alan Rickman’s Hans Gruber, in a career-defining performance) take control of a massive office building. in which a party is being held. Armed with guns and hostages, including McClane’s wife, only the NYC smart mouth with a badge can save the day. ‘Die Hard’ is an absolute classic. Anyone who hasn’t seen it is either crazy or blind. Topping most action movie polls around the world, ‘Die Hard’ will Live Hard forever.

McClane is back. And back with a bang. This time, his wife is once again in mortal danger, now as a passenger on a jet plane, as it and many others are forced to circle the skies, after military-trained terrorists seize control of an entire airport and its systems on Christmas Eve. Aiming to have a notorious drug lord freed from custody in the skies, the terrorists threaten to have each plane, filled with thousands of passengers, crash into the ground, killing every soul on board. McClane. Many may not agree with me on this, but ‘Die Hard 2’ is far more spectacular, dangerous and exciting than the first movie. The stakes are higher, the action is bigger, and McClane gets to show exactly what he’s about, as he has an entire airport to roam, in search of terrorist ass to kill. Absolutely wonderful blockbuster, it hasn’t aged a day in 25 years, it’s as spectacular as ever. Renny Harlin is one of the greatest action movie directors in the business, he is all about the thrills. I’m a major fan.

So many of you might be wondering why ‘Die Hard’ isn’t top of this list. It’s easy. Because ‘Lethal Weapon’ is! Starring Mel Gibson and Danny Glover (for the first of four movies), we see their characters, Riggs and Murtaugh, partner up to take down a secret cell of drug dealers, importing heroin into America. Riggs is a cop on the edge, deeply suicidal after the death of his wife. And Murtaugh is a 50 year-old long time cop looking forward to retirement. But with killers on the loose and Murtaugh’s family in danger, the two mis-matched cops take to the streets in an awesome battle of firepower and wits. For me, the ‘Lethal Weapon’ movies are pure gold. Violent, hilarious and packed with breathtaking stunts, the four movies have always thrilled me. And while I actually prefer them in running back order (4/3/2/1), I think they’re all perfect. And this first movie has long been considered a jewel in the crown of action cinema, leading to many copycats. There’s no more festive or exciting an action classic this year for you to enjoy, than ‘Lethal Weapon’.

So there we are. The 10 ultimate action movies you need to break out over the next few days. Settle down with a mince pie and a glass of egg nog, and enjoy these awesome festive action movies. Happy Christmas.