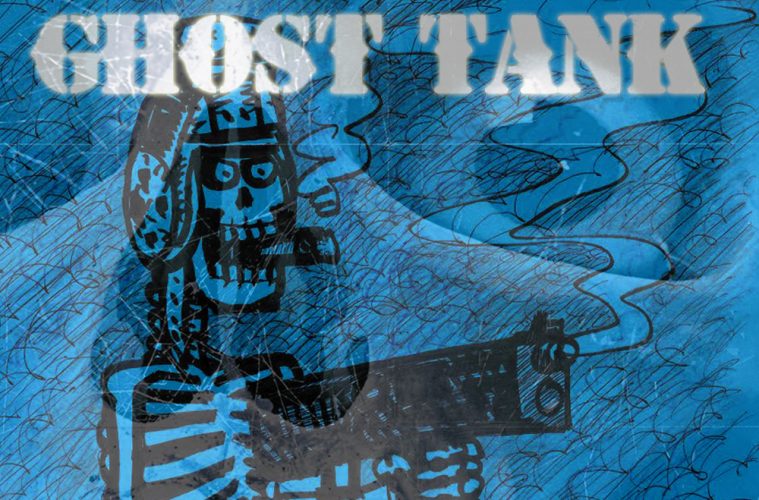 GUTS, GHOSTS, AND ROBOTS: AN INTERVIEW WITH ANIMATOR JOHN-GORAS

The Internet is a great place for creators to share their work. It’s an even better place when an audience finds them.

The first time I heard of John-Goras was his Vid.Me page where I stumbled upon one of his Ghost Tank shorts and was transported to a world of ultra-violence. A Skeleton (picture something like Eddy The Head) stalks a blown out battlefield, dual-wielding guns, and driving, well, a ghost tank, all the while pumping lead into a vast, unnamed army of bad guys.

Right away, I began reminiscing on the openings of Terminator 1/2 set in the future war and how they would look if remade by Dethklok, so I reached out for an interview…

Tell me a little about your background, what got you into animation?

What got me into animation? The first movie that really left an impression on me was King Kong. The original. I was like 6 and the local library was showing a 16mm print of it. And this was before VHS became a thing. So, seeing a movie, on a relatively big screen was a treat. At that age I had a major obsession with dinosaurs, so it was a religious experience on many levels.

Fast Forward. I had a traditional Illustration background, went to Syracuse Univ., got the BFA (Bachelors of Fine Arts). But that wasn’t enough apparently, so I got an MFA (Masters) later at School of Visual Arts. Also in Illustration. I didn’t get any actual schooling in film/animation until very late into my education. Teachers were always pushing me to get into animation, film stuff, but the tech side just scared the hell out of me.

This was during that weird time in the 90s when everything was transitioning from analog/mechanical to the digital. I got to actually use a Junior Oxberry and a Steenbek! Very few young people will know what I’m talking about there. Lots of creaking intermeshing gears and clumsy rolls of film getting scratched. I later took up Flash as the most practical means of making animation.

Your work is REALLY violent, but at the same time absurdly funny. Where do you draw your inspiration from, especially for something like Ghost Tank? I take it you’re a big horror buff?

I often site being raised Catholic for my bloody morbidity. And this was the Catholicism of like The Exorcist, not all this non-judgmental, politically correct tripe the Church seems to push these days. I think the Pope was saying lately there’s no Hell?! NO HELL?! F*** HIM! Um…Sorry. Mea Culpa. I digress…

Then there was being raised in the 80s with the ever looming threat of global thermonuclear war. FUN! And Punk rock. Holy Crap. Punk Rock… And Metal! I loved both, though I leaned towards the DIY smart-alecness of Punk. Real Punk like The Pistols, The Dead Boys, or GG Allin.

But, I’m a HUGE horror fan. I love all the  the old masters, Romero, Carpenter, Cronenberg. Later discovered directors from other countries, like Jean Rollin, Amando De Ossorio, Fulci, Argento, Buttgereit. You know, the usual suspects.

In regards to other cinematic influences, I could mention Film Noir, guys like Sam Fuller, Billy Wilder (well, his early stuff) or the Westerns of Howard Hawks and Anthony Mann or Leone. Then the urban crime-dramas of Don Siegel or Takashi Kitano. 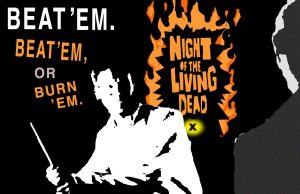 Night of the Living Dead poster by John-Goras

But, back to horror. Horror has always been a safe space for me. I knew it was never going to give me any unrealistic messages about the nature of life. Being packaged within a fantasy format made this brand of  therapy bearable for me as a kid. Wrapped within the willful rejection of disbelief necessary for a zombie, or werewolf, or vampire story was a bit of a prerequisite when younger.  I didn’t get into the Crazy Frustrated-Sex Killer genre of Don’t Go In the House or Fade To Black or The New York Ripper or things like that, because they were probably a little too close to the actual reality of what was both inside me and out there in the world. But, later I came to appreciate the slasher genre. I saw The Burning just recently and was blown away by just how nicely it was made and how poignantly it captured that frenetic hormonal awkwardness of adolescence.

But, Grim, Fatalistic, Manly, Mean, Dirty, Pissed-Off-Cinema. Yeah, that’s my G… Also humor helps, I find. Life is too long not to laugh at it.

How long does it take you to make a video? What’s your creative process?

I usually start by just doing sketches, coming up with gags, and ways to transition out of them and into the next gag. Then I throw myself into the actual animation authoring program until I’m thoroughly sick of the process. Then I’m back to sketching. Maybe shoot some video references of myself acting out certain bits, which I’ll later rotoscope. Video references NO ONE else will be allowed to see… EVER. 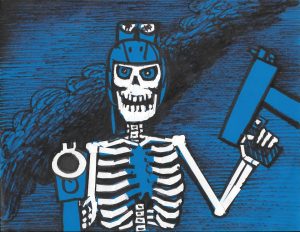 Then if I’m stuck in terms of ideas–directions to take a gag–I have an old friend whom I can call up for ideas. And No, it’s not an imaginary friend; I just don’t give him screen credit… generally. Process-wise, I’ve come to like switching between animating in Flash, doing the fine-editing in Final Cut, then toggling the work between the two programs.

Those long 30 fps Ghost Tank vids took waaaayyyyy too long. Years too long. But I think I’m at the point where I can do a minute of animation in a month.  Streamlining is key.

Do you like Action Movies? If so, what are some of your favorites?

Action Films? Yeah, they can be very satisfying. I recently saw Kill Or Be Killed, you know the old karate film? I’m not big on martial arts cinema, but that Kill Or Be Killed is AWESOME! I also really liked The Raid. John Woo’s old stuff is great.

What differentiates the Action genre from other genres which have intricately choreographed violence? I think it has to do with how prolonged the action is and how often it appears within the storytelling. Raiders of the Lost Ark is definitely an action film. Brilliantly so. Ditto The Matrix. I think The Road Warrior could be labeled as Action, whereas the first Mad Max was more of a suped-up Revenge Drama.

It’s a subtle thing, the difference between, and a filmmaker definitely has to commit to one of the competing ethos. Am I using ethos right? Or should I say “form?”

I believe ethos relates to the mood or feeling of something so I can see that. It seems like you might be wrapping your Robot Mutants series. What’s next? Do you have any future plans for your animation you’d care to share with us?

There’s MORE Robots Mutants to come. But, after that, I just don’t know. I do know that the rights to a rather beloved old film of mine (well beloved by others, I’m still sort of sick of it) are returning in total to me at the end of the month. It’s an animated porn-spoof I made called Chirpy.

I still don’t know what I’m going to do with it yet. Put it on YouTube I suppose. It’ll have to compete with the filth of ElsaGate though. And that’s some scary S***.

What else? Supposedly, an old filmmaker friend of mine wants to build a doc around me and my work. But, we’ll see… Actually, I’d like to stop animating, but whenever I try the old itch comes back. And  mere drawing/painting/sculpting/photography just don’t cut it.

Follow John on Vid.Me, and check out one of his Robot Mutant videos below!