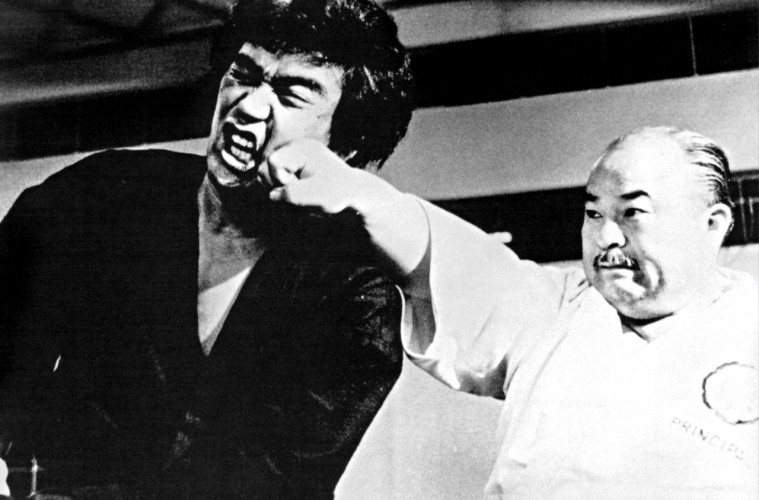 Netflixing Under The Influence: THE STREETFIGHTER Introduced Me To The Force Of Nature That Is Sonny Chiba

Sometimes I truly go out of my way to watch something I know will be terrible, but the unrealized mission of this feature is to explore an underwatched b-movie that prioritizes fun above all else.  Even I need a break from the monotony of bad movies sometimes, after all.

Maybe it’s philistine to be unfamiliar with the work of Sonny Chiba, but I’ve never actually seen a movie that focused on him and his mythically manic intensity.  But after his role in last week’s entry, it felt necessary to rectify that.  So here it is.  Sonny Chiba in his breakthrough role.

This movie’s available countless ways as it’s in the public domain, but I watched it on Amazon Prime.  Downed a few Stone IPAs to go along.  The beer has a lingering, extra-hoppy taste.  Some sips give you an unpleasant dank undertone, but if you focus on the subtle malt flavors it’s definitely potable.

This was quite a bit of the ol’ ultraviolence if I do say so myself.  The Streetfighter opens with Terry Tsurugi (Sonny Chiba) disguised as a monk, visiting a convicted murder named Junjo (Masashi Ishibashi) awaiting execution.  As they begin to fight– because of course they do– he socks Junjo a good one and explains that he just used the “oxygen coma punch technique” that will render Junjo unconscious right before his hanging.  Since hanging a comatose guy would be cruel and unusual (probably), the authorities have to transfer the criminal to a hospital to await a time when he’s healthy enough to kill.

This was all part of the plan, of course, because the next scene finds Tsurugi and his unfortunately named sidekick Ratnose (Goichi Yamada) intercept the ambulance and free Junjo.  It’s later revealed that Junjo’s siblings Gijun and Nachi (Jiro Chiba and Etsuko Shihomi, respectively) hired Tsurugi.  When they mention they don’t have the money to pay him immediately, Tsurugi flies into a rage and beats the heck out of them.  The fight leads to Gijun’s death when a dodged flying kick leaves him plummeting out a window.  Somehow this leads to Nachi being sold into sex slavery.  It’s only a few minutes into the film and already, like other spectacle-based b-movies, nobody seems too concerned with logic or keeping the audience up-to-date on characters and events.  What’s really important, however, is that Tsurugi is a cold-hearted antihero who solves all his problems with violence.

Chiba definitely owes at least some of his performance to the onscreen persona of Bruce Lee.  The consummate unflappable nature followed by verbally accompanied explosions of violence are a lot more exaggerated here, but it’s easy to make the connection.  What Chiba presupposes is that at one point, a Bruce Lee-type character was possessed by a feral beast that wants nothing more than to murder fools (“I hate punks more than anything and I would love to see the mob destroyed!”)  His body language alone is almost otherworldly, while his constant state of wild anger brings to mind a rabid chimp that still managed to maintain the intelligence to take on a whole room.

When the real story kicks into full gear, we find Tsurugi being hired to kidnap the daughter of a rich oil tycoon.  There is a breakdown in the negotiations and he declines, only to realize that the people doing the hiring are Yakuza and don’t take the rejection lightly.  In retaliation, Tsurugi pledges himself to get to her ahead of time and stop the kidnapping.  It all looks good and noble from the outside, but it really seems like he’s just making excuses to kill as many people as possible.

Then he teams up with a karate school to protect the would-be victim and leaves a trail of Yakuza bodies in his wake.  Meanwhile, the now freed Junjo rescues his sister Nachi from sex slavery and they team up to get revenge on Tsurugi.  Apparently saving one brother’s life (for free, mind you) doesn’t make up for accidentally killing the other brother.  All eventually comes to a head in a climactic fight aboard a boat.

As the movie goes on, there are quite a few mentions of “schools” and “styles” in a way that calls to mind the most chop-socky of the kung fu classics.  However, The Streetfighter acts as a direct refutation to the concept.  Tsurugi breaks rules of form and even decency.  There are even references to him as a half-Chinese, half-Japanese man with feet planted in both traditions.  The movie seems concerned with bridging that cinematic gap while pushing as many buttons as possible as well.  It’s a fun ride and Chiba carries the entire thing on his constantly moving, muscular shoulders.

In one moment, Tsurugi violently plucks out a guy’s eyes.  After the victim falls to the ground dead, he then inquisitively sniffs his fingers and wipes the blood off on Ratnose’s shirt.  The scene is a microcosm of the entire movie.  It’s disturbingly violent, oddly funny, and completely unexpected.  Chiba plays the moment with a strange animalistic reaction and then continues on his way.  The callousness with which he murders, the instinctive way he smells the blood, and the completely off-handed way he disrespects his sidekick’s clothing all point to the raw, low budget energy that runs through the entire film.

I was also pleasantly surprised to learn of what I assume to be an homage to The Streetfighter in one of my favorite movies of orgiastic, bloody violence, Riki-Oh.  Just like in that Hong Kong film, a crushing punch is illustrated by having the camera cut to an insert of an x-ray of a skull getting smashed by a bony fist.   There are quite a few unnecessarily stylistic choices utilized by director Shigehiro Ozawa here, but instead of distracting they almost always add to the absolute insanity of this savage martial arts movie.

As is often the case when a film is best described as having “raw, low budget energy” the storytelling here is awfully confusing and unfocused.  While everything does ultimately connect, there are way too many tendrils that get capped off unfulfillingly.  Incorporating a sideways revenge plot with Junjo and Nachi doesn’t add to the story, instead it seems like a detour.  There are even flashbacks about the death of Tsurugi’s father that don’t provide any meaningful background on the ruthless protagonist.  I often asked “Who are these people and why do I care?” as the movie jumped from idea to idea with little to no warning or explanation.  It consistently feels like scenes are cut or maybe even mistranslated because of the lack of narrative flow.

Hell yes it was worth watching!

The minefield of grindhouse movies is often a tough one since it can be such a mixed bag of quality.  There are too many duds that don’t rise above their amateurish, creatively bereft roots and have lived on in infamy simply because of one shocking scene or premise.  The Streetfighter is not one of those movies.  It may have a few moments that drag, but I’ll go as far to say it’s a masterpiece of ferocious 70’s sleaze.

Japanese martial arts movies don’t quite have the exposure that kung fu films did.  After all the samurai films of the 60’s, the action of Japan morphed straight into Yakuza and other gritty ultraviolent movies (including the “pinky violence” films which, like The Streetfighter, were produced by Toei).  While the Hanzo the Razor and Lone Wolf and Cub series’ attempted to bridge the gap, Sonny Chiba represents that lost genre of Japanese films trying to break into the kung fu market.  It’s a great subgenre of Japanese exploitation cinema and definitely worth your time.

Since this movie’s in the public domain, you can check it out on YouTube below: