Why Did I Watch ‘The Guyver’ and Why Does It Think It’s a Kid’s Movie?

This used to show up quite a bit in the TV listings for the Sci Fi Channel (before they started their moratorium on vowels) and it was always promoted it like some sort of big event.  Does this movie actually have a cult following or was this just programming hype?  As a result The Guyver always had a bit of an allure.  However, since this had a similar appeal roughly around the same time as Mighty Morphin’ Power Rangers, I, as a Teenage Mutant Ninja Turtles fan, had no patience for it.

Also, I shockingly couldn’t find a trailer on YouTube, so please enjoy this fan video of a System of a Down song cut to clips from the sequel, Guyver 2: Dark Hero:

Watched this on a sunny weekend morning off a dvd.  You know, instead of going outside or anything.

Unless your movie is part of a franchise that begins with an ‘S’ and ends with a ‘Tar Wars”, opening text crawls are rarely the best way to introduce an audience to mythology.  This is especially true when the set-up sounds like it has been written by a six year-old.  This one explains that humans were created by ancient aliens who planted a special gene into the certain members of the race, thereby creating “Zoanoids”.  These human hybrids can change into “super monster soldiers” at will.  I’m pretty sure “super monster soldiers” was the name of every action figure I owned before I learned how to read.  So the Zoanoids are bad guys and their leader, the Zoalord (David Gale), 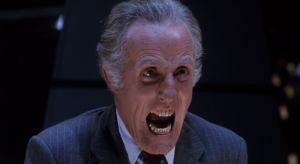 runs the Chronos Corporation.  This company is dedicated to finding The Unit, which grants humans 100x their current strength.  This laborious information dump all occurs before there is so much as a moving image or line of dialogue on screen.

Right off the bat, a Japanese researcher is killed by a group of Zoanoids for possession of “The Unit” (heh).  Max Reed (Mark Hamill) is a cop on the case who notifies the researcher’s daughter, Mizki (Vivian Wu), of his demise.  Vivian’s boyfriend is an amateur martial artist named Sean Barker (Jack Armstrong) who follows Reed and Mizki to the scene of the crime and manages to stumble upon The Unit and turn into The Guyver.  Reed, Mizki, and the newly powerful Barker team up to fight off the attacking Zoanoids (played by Michael Berryman and Jimmie Walker, among others) and take down the Chronos Corporation once and for all. 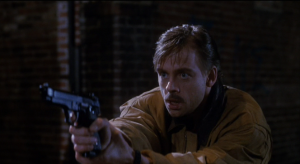 The Guyver takes quite a long time to get going.  Barker only utilizes the Guyver suit one time in the first 51 minutes, and that’s simply the cliche’ “Let’s show-off the newfound superpower by having the hero handily beat some regular thugs”.  A lot of the early time is spent trying to develop the characters, but there are just too many introduced to introduce any of them properly.  Barker is supposed to be the main character, but gets the least to do during this entire period.  Meanwhile, the annoyingly 2-dimensional Zoanoid henchmen receive an inordinate amount of jokey screentime that only serves to undermine the more substantial ideas.

Through excessively stylized comic book-like transitions, the filmmakers keep attempting to further explain the mythology that was already spelled out in the opening text crawl.  This double-dipping is indicative of how much faith the filmmakers have in the clarity of their story.  This may have been based on a manga-cum-anime, but that doesn’t mean the serialized story is impossible to simplify for a 90-minute feature. 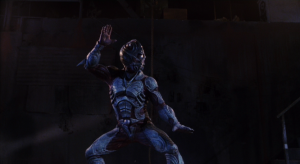 Through all the work to explain what’s going on, there are still significant and obvious unanswered questions.  For instance, why is the suit’s only weakness a clearly delineated ball right in the middle of the forehead?  That seems like a fairly fatal design flaw.  Why not put it in an armpit or on the suit’s gooch?  When the Zoanoids keep hitting Barker/Guyver in the weak spot, all it does is disorient him.  In his dizzy haze, he accidentally shoots at Mizki and renders her unconscious.  Instead of continuing to fight he simply becomes despondent and lets the bad guys drag him away and rip the Guyver suit off of him.  This serves to melt Barker’s corpse into a green puddle… but of course he’s brought back to life when the Zoalord starts performing experiments on The Unit.  This is because of the magic of “control metal” or some such nonsense.  Just writing this is starting to give me a headache.

Even more anticlimactic than the unceremonious resurrection, is when the Zoalord gets our hero in a bind and the suit’s cannons automatically shoot and destroy the villain.  Barker explains it away as “the suit protecting itself”, but why didn’t the suit defend itself earlier when you got beat up and melted, ya dingus?  Why would The Unit ever find itself in a bind if it had the power of “deus ex machina” the whole time?

Co-directors Steve Wang and Screaming Mad George (special effects crew on Predator) utilize fantastic costumes/prosthetics/animatronics that show a great amount of care as well as a healthy budget.  There are just some really effective make-up and creature effects in the vein of the Basket Case sequels and Nightbreed that give the movie a strong, though slightly cartoonish basis in reality.  The Zoanoids, while completely silly-acting, are pretty exciting aesthetically.  And with The Unit being stored in the back of Barker’s neck and a few other disgusting mutations, The Guyver is able to take advantage of some good old fashioned Cronenbergian body horror. 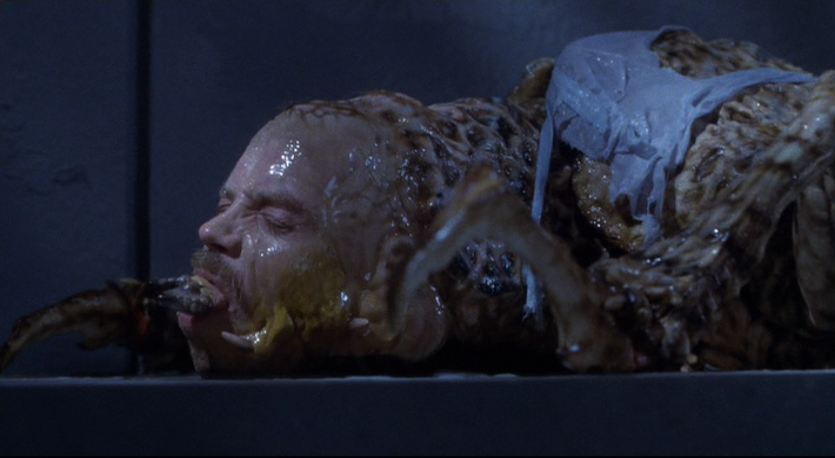 Although my personal favorite part was when Jeffrey Combs unexpectedly popped up a little over an hour into the film. He is truly wonderful in everything, no matter how dire.  As this is a Brian Yuzna-produced film, both David Gale and he get to semi-reprise their characters from the classic Re-Animator.

While the villains look incredibly cool, they are used terribly.  The goofy jokes and childish sound effects truly undercut the danger.  By the time Barker gets control of The Unit there’s no doubt he’ll win his fights, as the bad guys are all bumbling idiots.  This is the same issue that occurred with Super Mario Bros., but to an even greater extent.  Not only do the henchmen suck at their jobs, but they’re mined for yuks in all the worst ways.  Similar to the cringeworthy “General Hospital/Who’s the Boss?” exchange from Double Dragon, Jimmie Walker’s Gremlin-looking Zoanoid can’t even get through the movie without shouting “Dy-no-mite!!!”

At one point, one of the creatures is chasing our heroes and stumbles into a movie being filmed.  The director chastises him for blowing his lines and then remarks how great his costume looks. 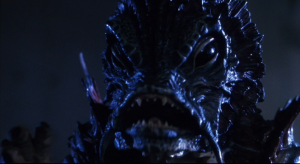 What kind of director would have no idea what an expensive costume looked like before they were filming?   This willingness to break the 4th wall for a cheap joke tends to relieve a film’s tension in the worst way possible.  The Guyver excels at this kind of anti-drama.  Overall, the filmmakers treat us to some successfully dark PG-13 moments and regularly juxtapose it with subpar PG-movie humor.

It wasn’t a complete waste of time, and I see how I would have really enjoyed this as a child.  However, it fails to fit the basic adult requirements of pacing/story/character/action/you name it.  Lots of b-movies suffer from these shortcomings, but they still maintain a sense of fun.  While it does utilize some neat techniques and boasts a handful of interesting practical effects, The Guyver doesn’t have the level of craft required to be sufficiently charming.