Kingsman: 5 Differences Between The Movie And The Comic

Spy vs. spy. How does the movie stack up to the comic?

As the story goes, in 1987, writer Mark Millar asked legendary comic artist Dave Gibbons (Watchmen, Judge Dredd) to collaborate on a Shazam comic with him. Millar of course was a “wee lad” (Gibbons’ description, not mine) and several years off from becoming the scribe who would give us such modern funny magazine milestones as The Ultimates, Civil War, Superman: Red Son, and Kick-Ass.

Jump forward 27 years later and Millar and Gibbons have not only collaborated together on a comic series called Kingsman: The Secret Service, but their efforts have spawned a motion picture that is currently in theaters. The film and the comic both credit director Matthew Vaughn as a co-writer, indicating a much larger and far more intricate collaborative process than one would expect from a comic-to-film adaptation. Once you factor in Vaughn’s go-to screenwriting partner, Jane Goldman, into the mix and  you get a multi-media project with a lot of cooks in the kitchen.

But how different is the film from the comic?  Where do the two separate wildly and where do the two find the most common ground? We’ve read Kingsman: The Secret Service and we’ve seen the film over the weekend, and the differences are far from subtle….

Needless to say, I’ll try my best to not dump any major spoilers on you, but there will be a few minor ones.

The Kingsman organization is structured much differently.

It is pointed out early in the film that “Kingsman” is an independent organization with no ties to any form of government. This is in direct contrast to the comic which makes it clear within the first few pages that Kingsman is an extension of MI6.

Also, not only is there no mention of each Kingsman being code named after the Knights of the Roundtable, but Hary Hart, Colin Firth’s character in the film is given the far more patriotic name of Jack London.

Fun fact: Millar originally pitched Kingsman to Marvel as a S.H.I.E.L.D. comic where Nick Fury mentors a kid from the streets. Marvel rejected the concept and Millar repurposed it with Vaughn to make Kingsman: The Secret Service. 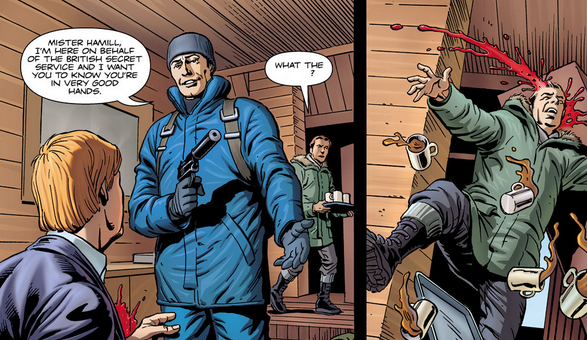 Early on in the film, we are introduced to Professor James Arnold who is played by Mark Hamill of Star Wars fame. In the comic, Arnold is actually a totally separate character and Mark Hamill is himself. I won’t give away why the Star Wars actor  is even in the comic, but much like the movie, Hamill’s part factors into the larger plot.

To the same point, the story’s love for film and television is abundant. This is absolutely true for both Kingsman the comic and Kingsman the movie, but it rings doubly true for Millar and Gibbons’ story. Without giving too much away, people connecting through pop culture seems to be a running thread throughout the series itself. Not a big surprise coming from the writer who had an entire scene in The Ultimates where the Avengers cast themselves in their own movie. 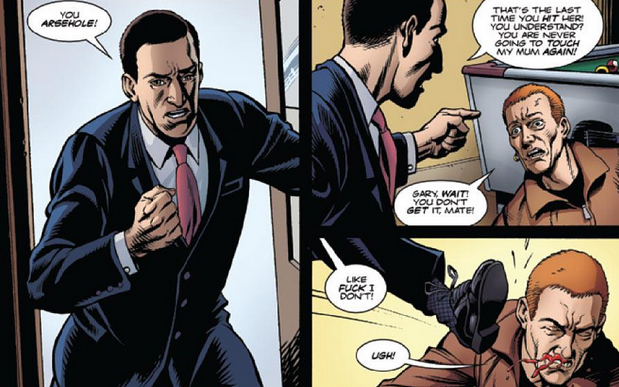 Eggsy has a much steeper hill to climb.

When compared to the comic, Vaughn and Goldman go out of their way to paint Eggsy Unwin, the film’s true protagonist, as far more capable and a good fit for spy work. Played by Taron Egerton on screen, Egerton’s comic book counterpart is not smart as a whip or a Royal Marines drop out like he is portrayed in the film. As a matter of fact, Colin Firth’s character in the comic is Eggsy’s uncle and he pulls a lot of strings to get him off the streets and into Kingsman. From there, Millar goes out of his way to make Unwin earn his spot within the organization. This also plays out much differently, as Eggsy ends up having to take on “a prominent local businessman” to prove his value.

Eggsy’s dynamic with his mother is much different as well. In the movie, Michelle Unwin is, quite honestly, merely a victim of domestic abuse with little agency. Surprisingly, in Millar’s hands, Eggsy’s mom actually stands up for her son and even defends herself (off panel, mind you). 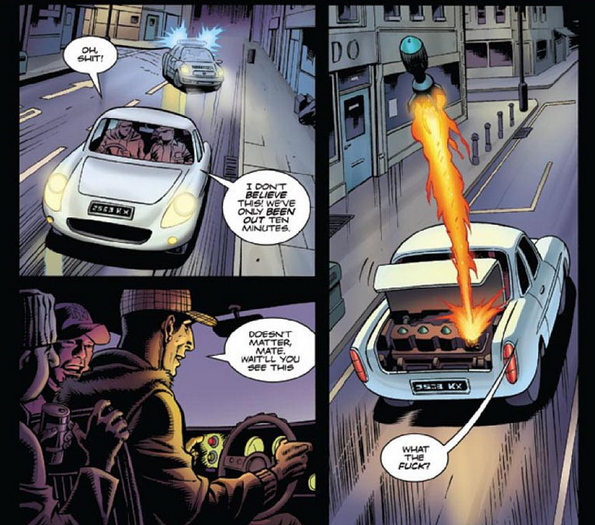 The overall story is leaner.

With a few small exceptions, the comic has no real interest in the supporting cast. Interestingly enough, Gazelle (played by Sophia Boutella on screen) is actually a man in the comic who only gets involved in the action much later in the story. Also, the Roxy character and the Swedish princess are virtually non-existent.

Finally, in terms of subtext, there is no commentary on the 1% like there is in the film. Actually, it could be argued that Millar’s story is more about government assistance than us vs. them.

The bad guy is very different.

Somewhat disappointingly, the equivalent to Samuel L. Jackson’s amusingly colorful, lisp-y world-beating master criminal is nowhere to be found in the Kingsman comic. While Millar’s bad guy in the comic is a notable jab at man-children everywhere, the only thing the two villains have in common are their motivation. Which is a bit of a stretch on both fronts, but at least Samuel Jackson’s presence gives the the evil plot something palpable.

Fun fact: In an strange example of art imitating life and life imitating art, writer Mark Millar was part of the creative team responsible for giving Marvel’s long-standing super-spy, Nick Fury, a complete and total makeover. In particular, in 2001, they modeled the character after actor Samuel L. Jackson despite Fury having been depicted as white since the 1960s.  Several years later, this swap would influence Marvel Studios decision to cast Jackson as Nick Fury for the Marvel Cinematic Universe.

And that’s it. What did you guys think of the comic and the movie? Did you prefer certain elements of the film? Would the film have benefited from taking more from the comic or visa versa? Let us know in the comments. But please remember to utilize good manners when you do. It maketh the man…