DEADLANDS: Creators Bart Sears And Shane Lacy Hensley Talk About When The West Was Weird

The creative team behind Visionary Comics’ newest old West occult comic sits down with Action A Go Go to talk hell on earth, D&D, and pulling back the curtain on the untapped mysteries of the Deadland saga.

SPOTLIGHT ON DEADLANDS: THE CACKLER INTERVIEW WITH THE CREATIVE TEAM

From Visionary Comics: As they hit the home stretch of their sucessful Kickstarter campaign for the next volume of Visionary Comics’ Deadlands series of graphic novels, we wanted to shine a spotlight on this awesome new book coming out this year. The Cackler is a 4-issue mini-series, printed in one hardback volume, that is both a huge payoff to long-time Deadlands fans, and a great jumping on point for new readers. The book promises a lot of action, adventure, mystery and thrills in the weird west tradition! Written by the creator of Deadlands, Shane Lacy Hensley, and drawn by comics’ legend Bart Sears, this book is going to be a stand out in the genre!

Check out the Kickstarter Campaign, and Visionary’s main site for updates. 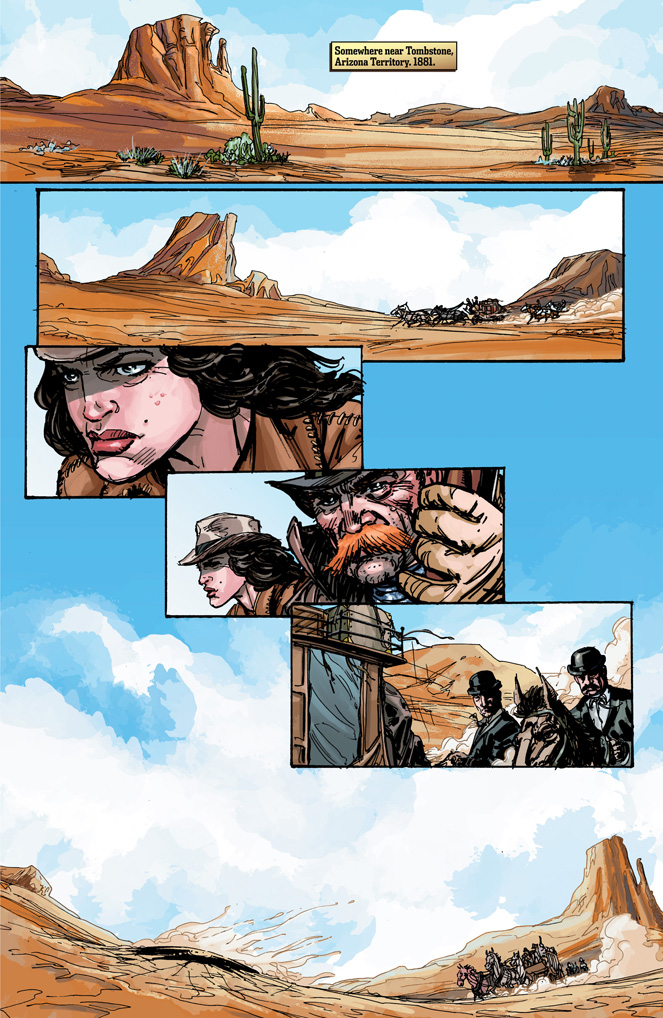 Alright, Shane, let’s start with you and at the beginning for all the newbies. What’s Deadlands all about?

Shane: Deadlands is a Weird Western where the Four Horsemen of the Apocalypse, known as the Reckoners, are trying to bring about a Hell on Earth so they can walk upon it in the flesh. They do this by nurturing fear to drench the earth in dark, supernatural energy that can sustain their physical manifestation. That’s the “meta level” and the back story that ties all the various Deadlands games together—the original Weird Wetern, the post-apocalyptic “Wasted” West” of Hell on Earth, Deadlands Noir, and Deadlands Lost Colony—which takes place on the far fringes of space.

Most importantly, in the world of Deadlands, those with particularly strong wills can come back from the dead—hence the name. The price is high though—the “Harrowed” crawl out of their graves by way of “manitous,” evil spirits that vie for control of their host. Those Harrowed who maintain “dominion” over their demonic rider can quickly develop additional supernatural powers as well.

So, nice mix of Western, Horror, Mystical and Steampunk. Fantastic! How did this all come about? What made you create Deadlands?

Shane: The original inspiration came from a Brom / White Wolf painting that was later used for their Vampire the Masquerade game. The book was Necropolis: Atlanta, and it featured a vampire with his crossed guns in front of a tattered rebel flag. (I originally saw it as the cover of their magazine though and didn’t realize he was a vampire.) I saw it at a convention (GenCon), and had a 16 hour drive home afterwards, through the long, dark night. I couldn’t get that image of the undead “cowboy” out of my head. I kept wondering “What was so important in life that he crawled up out of his grave for?” Slowly, all the ideas began to take form. I eventually put the game together for my home group. Everyone seemed to love it, so I decided to do it for real. 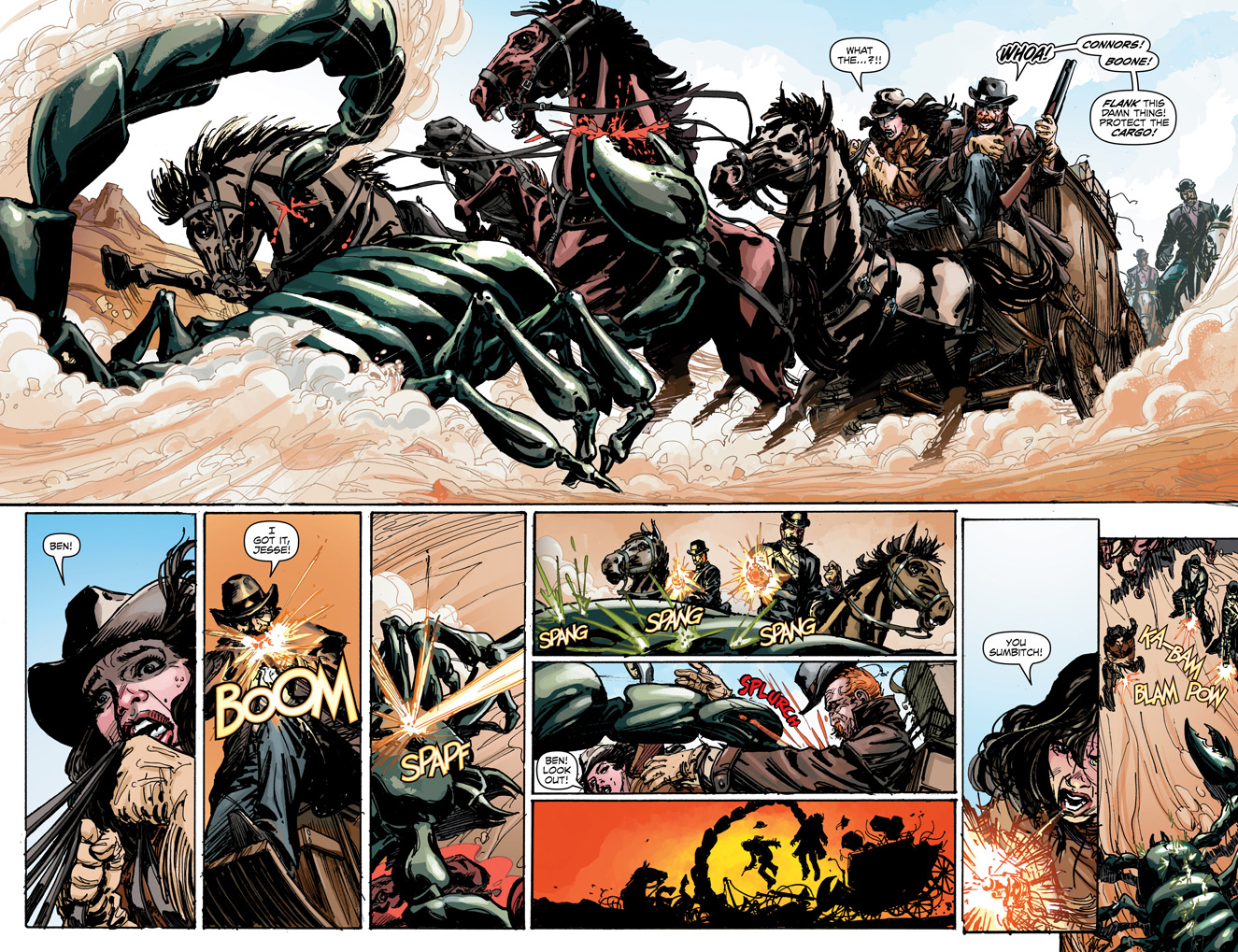 And everything grew from there?

Shane: Yes. We were very fortunate. At first we were told that Westerns don’t sell, so we planned on a small print run, then we’d blow the world up and let the bad guys win—a story that would be told in the post-apocalyptic sequel, Hell on Earth. We did that, but as Deadlands proved successful we made it official that the Reckoners cheated…Hell on Earth wasn’t inevitable. Exactly how that works is best left to the books themselves, but we think it’s a pretty cool story. Short version? The Reckoners do lose and Hell on Earth is avoided—but then they cheat. At least in the official timeline. 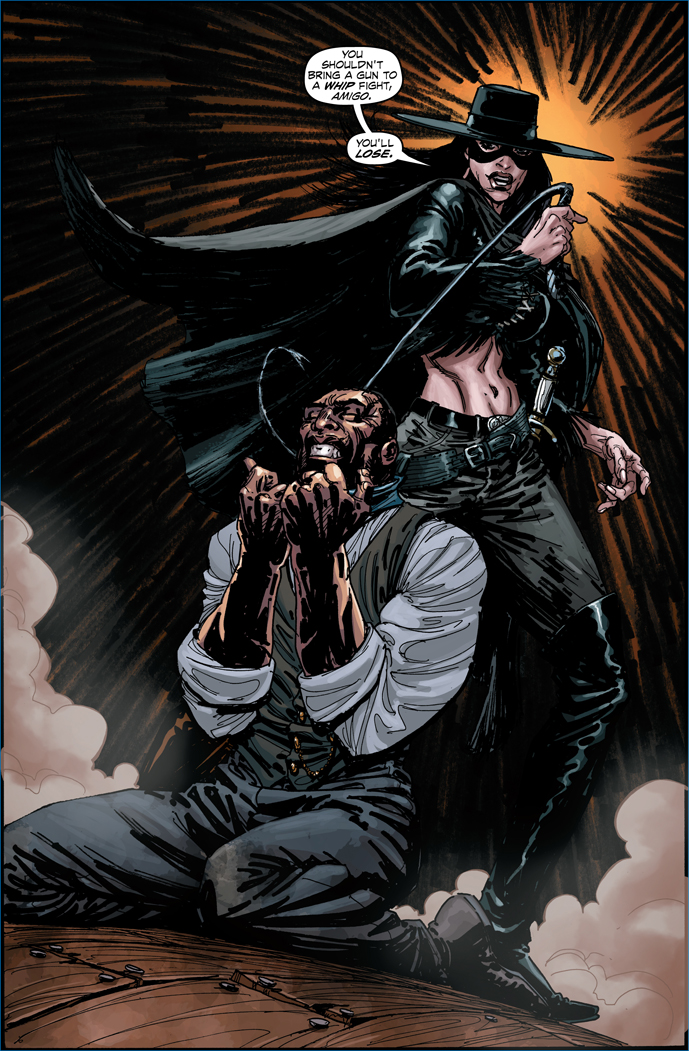 Sounds like a world and setting that would appeal to comics fans on multiple levels. You got your genre points, you got your epic backstory, you got your whole worlds of characters and even your own twisted timelines and alternate futures. Now…tell us about the Cackler.

Shane: In college, I ran one of my favorite Dungeons & Dragons® campaign settings, Dark Sun. One of the villains was an albino elf with long, stringy hair and round, rose-colored sun-glasses who giggled after he insulted the heroes. I did the laugh when I ran the games and my players hated that guy. It stuck with me years later when we created Deadlands.

We had always planned on Deadlands being a property, not just a roleplaying game, and one of the things we were excited about was pitching an animated series—something like HBO’s Spawn. We didn’t know it was going to be so short-lived at the time, of course, but we thought a dark, adult-oriented animated show would be a fantastic way to explore the Weird West.

Since we wanted this to be an animated series, I wanted the Cackler’s origin to be something that was unveiled over a long season, and when people found out—when they deciphered all the clues—the payoff would be worth it. And just like with the Reckoners and Hell on Earth, I knew I wasn’t afraid to let the bad guys win. You’ll have to read the graphic novel to find out exactly what that means.

The first foray into our comics had some tremendous talent, one of which was Bart Sears. When Chuck asked if I’d like to finally tell the story of the Cackler with Bart, there was no way I could say no.

What’s it been like working with Bart and Visionary?

Shane: I’ve been reading comics for over 40 years…since I could read…so getting to write a real meaty book like this is a treat all on its own. C. Edward Sellner (and Brand Manager Matt Cutter) have really helped me hone whatever skill I might have and I think people will love the end result of what is truly a team effort. That was before I saw Bart’s art—particularly the initial shot of the Cackler, and later his crew. It’s been the screen saver on my computer for over a month now! But it goes beyond just cool characters. Bart took the first few pages of the script we wrote and made a few changes—changes we all instantly agreed were even better. He truly is a natural and visual storyteller, and if fans like the book that eventually sits in their hands, it will be first because of the great editing and advice by Matt and Chuck, and by Bart’s eye for making those words flow into the visual medium.

Alright, how about you Bart, fill us in on your background with this property?

Bart: I was familiar with Deadlands as a role-playing game from way back, and I thought the concept was intriguing. But beyond that, it was a western; I’d never had the chance to do a western before and really never thought I would. Making that even better, was the mix of cowboy and sorcery, giving Deadlands a kind of sword and sorcery feel, which I love. 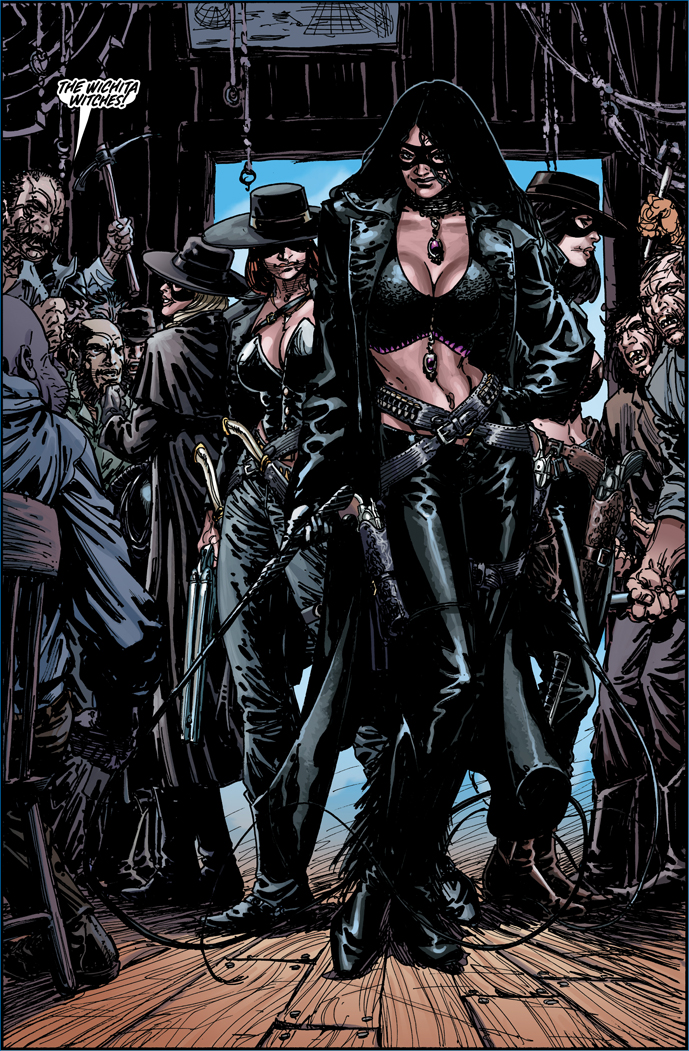 Bart, your art style for Deadlands is pretty distinct (and awesome), and not like a lot of your other work. I even saw a fan adamantly claim a piece you posted was not “Bart Sears art!” Can you tell us what you’re going for , or what your approach is in deciding the look for each project?

Bart: I felt the look needed to be gritty for a western story… add horror and supernatural and, well, slick and clean just didn’t seem right to me. I’ve always felt that each project needed to be approached individually… not always, that isn’t quite true, when I first started drawing comics I was much more concerned with just drawing well, doing a good job. As the years passed, and I became more proficient and confident, the way the story was told, layout, feel and the finishing style for each project became much more of a focus.

So, now you’re doing The Cackler, one of the most mysterious characters in Deadlands lore. What attracted you to this gig? How is it similar or different from previous and what is standing out to you the most?

Bart: I was pleased and excited to get the chance to revisit Deadlands. I very much enjoyed drawing Death Was Silent, and jumped at the chance to do the Cackler. It’s interesting to get to travel and create in the Deadlands milieu again, explore more of that strange world and bring to visual life such an interesting character as the Cackler. Bottom line… it’s fun to draw this stuff.

What’s it like working with Shane Hensley, creator of Deadlands, for this book?

Bart: I’ve been enjoying our collaboration immensely; Shane brings an energy and excitement that is addictive. His vision for the Cackler’s story is fresh, and I think turns out to be quite a shocker. I just hope I can do his story justice.

Any thoughts on the return engagement with Visionary Comics?

Bart: Chuck and everyone at Visionary have always been great to work with. It’s not often you find a company to work with that is as supportive, helpful and creative as this bunch. I’m happy to have the chance to work with them again.

Are you a big fans of Westerns and if so, which is your favorite?

Bart: As a kid, I loved Zorro and the Lone Ranger – both the TV shows and the comics… couldn’t get enough of them. The Wild, Wild West, Bonanza, the Rifleman, Gunsmoke, The Mavericks, so many western shows I grew up with. So many great movies… The John Wayne classics, the spaghetti westerns… a favorite? I don’t think I can pick just one…

Any parting shots (so to speak)?

Bart: The Cackler is a great story – I think anyone who loves the Deadlands RPG will love how we’ve brought the Cackler and the world of Deadlands to life( I hope they do, anyway!)… more than that, anyone who loves a good yarn will really dig this look at a truly great Deadlands character. 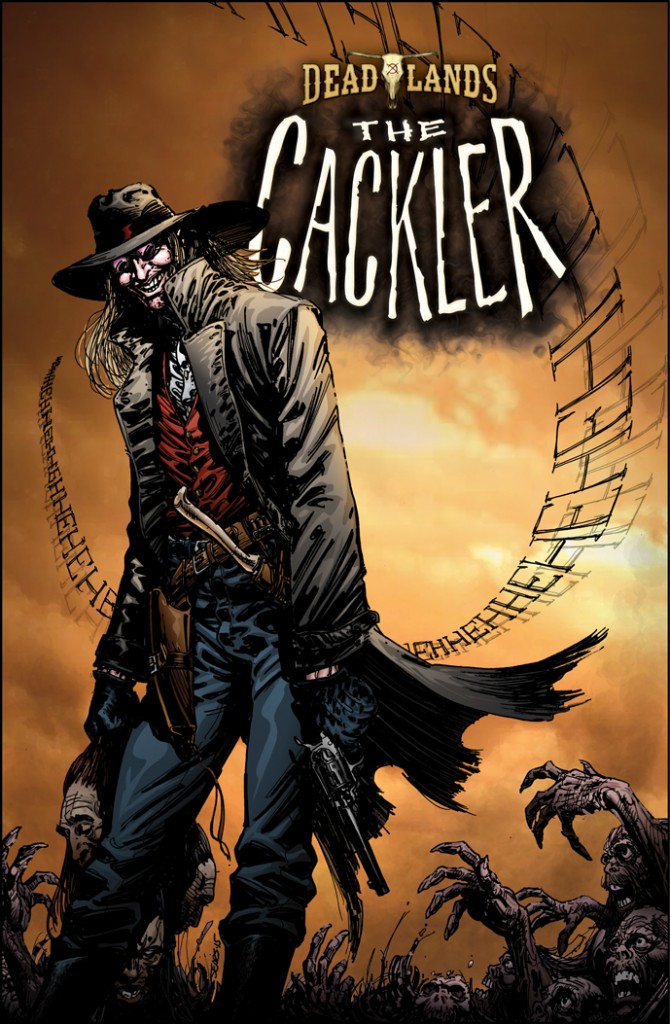 Source: Official site | Action A Go Go on Twitter and Instagram |Be sure to leave your thoughts in the comments section!