Kickstarter: Steampunk Meets The Wild West In DEADLANDS: THE CACKLER

“Our Kickstarter is 98% funded, but there’s plenty of time to get on board for this weird-western epic…”

February 3, 2015 – For Immediate Release
Visionary Comics and Pinnacle Entertainment are bringing the next volume of the original weird-western to life withDeadlands: The Cackler!

Deadlands, the game that defined the Weird West, mixing elements of the classic Western with Horror and Steampunk to create a unique world of monsters, myths, magic and gunslingers has been enjoying a huge resurgence of popularity and making its mark in the world of comics and prose, with huge announcements in recent months.

The first collection of the “All-Star Western” one-shots originally published by Image, is now available through pre-order from IDW, and has a special promotional campaign still running, where anyone pre-ordering the book can get two free digital books. Get the details here>>

Visionary has posted interviews with all the creators, behind the scenes stories and designs, and extended previews of each one-shot! Over 36 pages of story and art, FREE! Awesome talent from the book includes: David Gallaher, Steve Ellis, Jimmy Palmiotti, Justin Gray, Lee Moder, Ron Marz, Bart Sears, Jeff Mariotte, and Brook Turner.

Building on that momentum, Pinnacle and Visionary launched a Kickstarter campaign just last week to fund the development of the next graphic novel entitled Deadlands: The Cackler.

Written by the creator of the game, Shane Lacy Hensley, the book reveals the secret origins of one of the most notorious villains of the setting, a maniacal harrowed who has scoured the weird west in search of a blood relative, all for sinister reasons. The book is being drawn by comics legend Bart Sears and colors are from Michael Atiyeh, and while the campaign is just a few hundred dollars away from its lofty goal, there is still plenty of time to get on board.

Check out the Kickstarter here >> 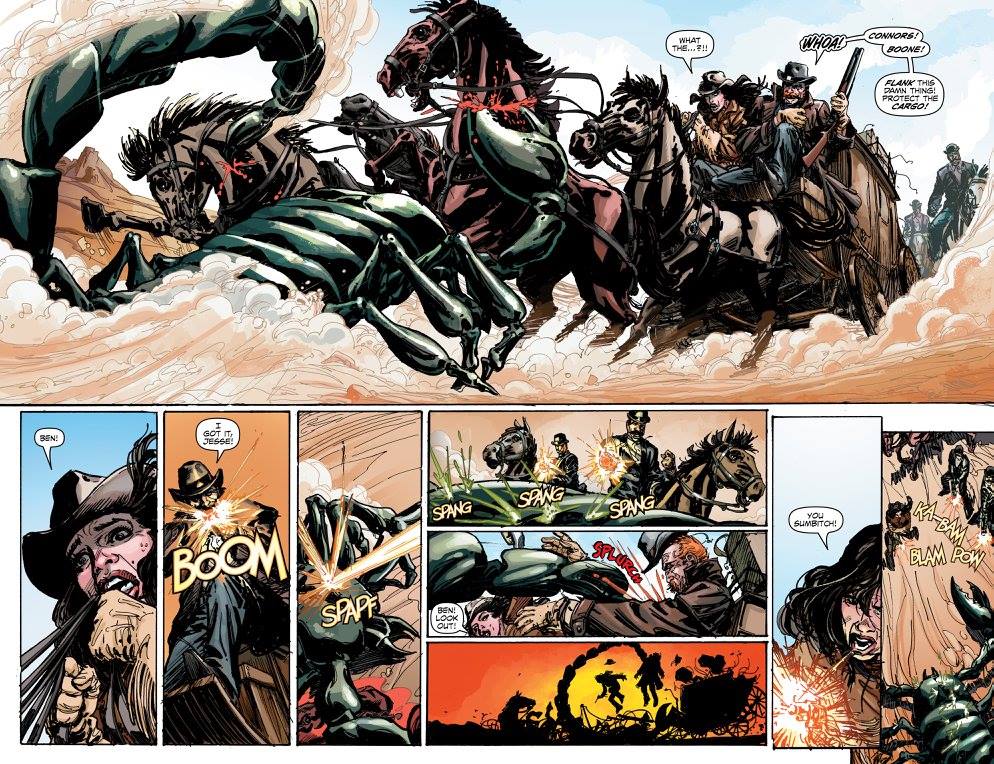 “We wanted to do something never before done in the history of licensed gaming comics,” said C. Edward Sellner, CCO of Visionary Comics. “We’re about to hit the 20th anniversary of the game, and with all the developments, we wanted to bring something that both lifelong fans of the game would love, but also be hugely appealing to new fans. We wanted a graphic novel that hit the same marks of quality as our previous Deadlands comics, with top creators. We wanted something that only the creator of the game itself could write, a story central to the core of the world, and one that would shake it to its’ very roots. On that score The Cackler delivers.”

The campaign runs until March 5th and includes a number of extra rewards, and an exclusive Kickstarter edition of the book that won’t be available anywhere else. Fans of the game will enjoy the ties to the backstory of the world, but the story stands firmly on its own as a classic and stunning weird western.

Visionary is releasing the entire first issue throughout the campaign, with new pages added to their web-comic portal every Tuesday.

Source: Visionary Comics | Action A Go Go on Twitter and Instagram | Be sure to leave your thoughts in the comments section!