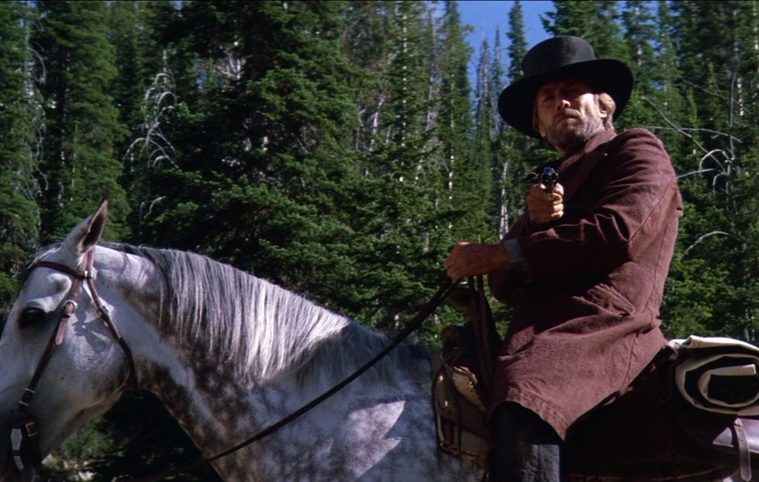 PALE RIDER: THE MOVIE THAT SAVED THE WESTERN

The genre, that had previously been such a staple of Hollywood output, had burnt itself out during the Seventies.

Public interest had waned. The great stars of ‘horse opera’ like John Wayne or Randolph Scott were either dead or retired. And once popular TV series like Gunsmoke or Bonanza were on the downward run to cancellation.

The final nail in Django’s coffin lid came in 1980 with the release of Michael Cimino’s notorious box office bomb, Heaven’s Gate. A sprawling western epic the film was a financial disaster of such biblical proportions, it put the United Artists studio out of business.

Its production is a classic tale of artistic hubris and mismanagement (an unchecked Cimino had been allowed to shoot over 220 hours of footage at vast expense). But Hollywood chose to draw a simpler conclusion from the debacle: namely, that they should never make another western again.

It took the return of one of the western’s icons to prove that there was still life left in the genre, and begin the rehabilitation process.

Few actors are as synonymous with the western as Clint Eastwood. He’d made his name in the long-running cattle-driving TV series Rawhide, before helping to redefine the genre as the ‘man with no name’ in Sergio Leone’s ‘Dollars’ trilogy. But even he could see tumbleweed and Eastwood hadn’t made a western since The Outlaw Josey Wales (1976).

But after a decade away, the squinty-eyed star decided it was time to strap his six-guns and saddle-up for Pale Rider (1985).

The film’s simple plot sees a mysterious preacher (Eastwood) protecting prospectors from a greedy mining company trying to force them from their land.

Little in the film was original. The story borrowed heavily from the Fifties classic Shane (the stone-shattering scene is clearly a homage to a scene involving a tree stump in the earlier film) and supernatural elements from one of Clint’s own efforts, High Plains Drifter (1973). But it’s the handling of the material by the Dirty Harry star that elevates the film to greatness.

The classic story pacing steadily escalates the conflict between the prospectors and Richard Dysart’s avaricious land baron forcing Clint’s preacher into taking sides. The action is strictly rationed but carries all the more weight for being born naturally from the consequences of the plot.

The scene where Eastwood despatches a Dysart’s goons with a pick axe handle is as satisfying a beat-down as he’s ever administered.

Eastwood’s performance also benefits from his advancing years. Now in his mid-fifties, Clint’s ‘no name’ persona seems richer and deeper. Older, craggier, the taciturn ambivalence seems no longer youthful posturing but something born from a past trauma.

The atmosphere is heightened by Bruce Surtees’ beautiful photography of the sparse autumnal landscape. The cool colour tones and vast spaces create help hint at the story’s other worldly possibilities.

On its release Pale Rider was well-received by critics and even garnered a Palme D’Or nomination. Eastwood’s was praised for taking what was well-worn material and elevating it beyond the familiar. But the film’s real legacy is in making Hollywood believe that there was still gold that could be panhandled out of the western.

In the following years, Brat pack western Young Guns (1988) repackaged the genre for younger audiences who had come to see the films as old fashioned, anachronisms that Dad liked. And the Oscar-laden Dances With Wolves (1990) proved that westerns could be commercial and critical success.

There followed a western renaissance, with old school sprawling shoot ’em ups like Tombstone, light-hearted entertainments like Maverick, to revisionist efforts like Posse or The Quick and the Dead that challenged traditional conceptions of race and gender in the genre. And Eastwood himself returned once again to make Unforgiven, possibly his definitive statement on the genre.

But without Pale Rider, none of that history would have been written.