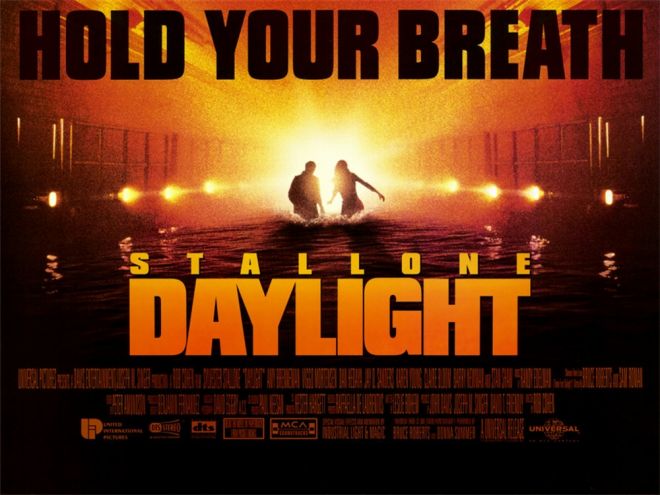 Ahhhh, the 1990’s disaster movie revival. Those were some glorious days, weren’t they? A time of ‘Twister’, a battle between ‘Volcano’ and ‘Dante’s Peak’, and the first mega-hit “Blow ’em up!” blockbuster ‘Independence Day’. And who could forget the asteroid showdown of ‘Deep Impact’ and Michael Bay’s magnificent ‘Armageddon’? And greater than all, Steven Spielberg’s return to ‘Jurassic Park’ with ‘The Lost World: Jurassic Park’. And then Roland Emmerich hot off the spectacular success of ‘Independence Day’ with the incredible ‘Godzilla’. Double volcano movies, meteor movies and dinosaur movies? Oh hell yeah! The 1990’s disaster craze ruled! And standing toe to toe with the mammoth disaster movies of the 90’s is Sylvester Stallone’s disaster epic ‘Daylight’. Every fan of action cinema adores Stallone and all he’s done for the genre. And we each have our own favorites from his wonderful list of action treasures and classic thrillers. But my own personal favorite of Stallone’s legacy has been ‘Daylight’, since it first hit 20 years ago.

Stallone stars as Kit Latura, a former emergency worker who now works as a cab driver. One lethal night, Latura is transporting a rich couple through New York City when a devastating explosion rocks the Holland Tunnel, which links NYC to New Jersey. With the collapsed tunnel now trapping a group of survivors 100 feet below the Hudson River, Latura explodes into action once again to take on the deadliest mission of his life: To somehow break into the tunnel and to somehow break the survivors out, before the raging water above comes crashing in and obliterates every life in its way.

‘Daylight’ is all that is wonderful about disaster movies. A major star with Sylvester Stallone and a wonderful support cast including Amy Brenneman (‘Heat’ with Al Pacino and Robert De Niro’), Stallone’s own son Sage who sadly passed away, Viggo Mortensen (The ‘Lord Of The Rings’ trilogy) and scream queen Danielle Harris (Known for her career in classic and low-budget horror movies such as 4 ‘Halloween’ movies, and also her appearance in several action masterpieces including ‘The Last Boy Scout’). Plenty of heartbreaking emotion, including the deaths of several of the movie’s best characters, living up to the very best of the classic disaster movies. Stallone himself puts in a very human performance, which is very refreshing, as he has so few of that type of role early in his career. A disaster movie is always better with an ordinary man at the helm and not a superhero, Stallone knew that, which makes this performance one of his finest (Check out the terrific Charlie Rose interview promoting ‘Daylight’ below). And most of all, some truly incredible action sequences, which include one of the silver screen’s greatest explosion scenes and the death-defying tunnel break-in of Latura. ‘Daylight’ satisfies on every level, as it delivers danger, fun and sadness at every turn until the spectacular finale.

With the fantastic action director, Rob Cohen, on board, ‘Daylight’ has a feel all its own, despite paying heavy homage to the disaster flicks of the 1970’s. And a lot of that is thanks to Cohen, who is best known for the first movie in the major franchise of ‘Fast And Furious’ and ‘xXx’ (Which also stars Vin Diesel). Moving at breakneck speed, the story only slows down to deliver the required emotional punches needed for its genre, before it blows up again and throws its characters into constant peril. Cohen has a wonderful eye for action, as he proved with those mentioned movies, delivering plenty of explosive thrills along with dazzling shots both inside and outside of the tunnel, which he directs brilliantly. The catalyst explosions are especially mind blowing to watch. And with Cohen’s style of film making comes a wonderful crew of movie geniuses including the late great Grant McCune, perhaps best known for his iconic work on the ‘Star Wars’ movies, as the leading prop builder, with R2-D2 among his creations (He won an Oscar for his ‘Star Wars’ work.). The miniature models in ‘Daylight’ are fantastic, including the major tunnel shots and special effects sequences. McCune was a lover of fine detail, and he proved it yet again, after working on the classic action movies ‘Die Hard’ and ‘Speed’. He was a wonderful man, and his contribution to film will never be forgotten.

As we all know, a movie without music rarely works. And a movie with bad music works even less. So naturally with a movie on the scale of ‘Daylight’, a massive soundtrack score is called for. Enter singer/songwriter and movie composing master Randy Edelman. Edelman has not only sang his own hit songs (‘Uptown Uptempo Woman’), but also wrote songs sang by other artists such as ‘Weekend In New England’ by Barry Manilow (Perhaps best known for its use in the classic TV show ‘Friends’). But better than all is his list of film music scores, which is one of the finest you’ll come across. Including movies such as ‘Ghostbusters II’, Jim Carrey’s ‘The Mask’ and Rob Cohen’s ‘xXx’ (He worked with Cohen several times, with other movies including ‘Dragon: The Bruce Lee Story’ and ‘The Mummy: Tomb Of The Dragon Emperor’), Edelman has constantly proved his skill as a great soundtrack composer. But in my opinion, he has never produced work greater than his pounding piano-driven score for ‘Daylight’. The opening credits scene is especially a highlight, with that wonderful heme kicking in and setting the tone for the entire movie. Big, bold, but lovingly simple, a few piano notes that build up such tension and excitement, with the massive electric orchestra adding power to his music, providing ample companionship for the thrills onscreen. That is power I’ve only ever witnessed from Edelman. One of the greatest action movie scores.

‘Daylight’ is one of those movies that I watch countless times, and I always ask myself “How is this not far more famous?”. It seriously couldn’t be any better than it is. With a brilliant crew, a fantastic action director, one of the biggest movie stars in the world and a score to light up the imagination, this is a movie that seriously needs to be put upon a pedestal. Hands down my favorite Stallone movie, and a truly worthy entry into the legacy of the great disaster movie genre.

Come back soon as the next movie on the list celebrating the great action movies of 1996 is sure to put a spin in the air. (Clue: I mentioned it earlier!).