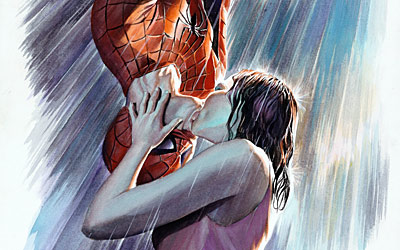 By Troy-Jeffrey Allen and Sarah Deborah

Why is it that every action/adventure film has a romantic subplot? Well, it’s because love is for adventure and crazy people. You ‘d have to be daring and a little nuts to jump into the realm of romance, so who better to punctuate that concept than heroines and heroes.

That’s right, love is the most bad-ass thing you can do and these five on-screen couples did it in the most explosive, spectacular way possible: Projected 30×70 feet high at a theater near you.

5. Arwen and Aragorn (The Lord of the Rings Trilogy)

“I would rather share one lifetime with you than face all the ages of this world alone.” – Liv Tyler as Arwen

Power couple of Middle-Earth. The immortal Arwen defies her father, keeps her faith, and brings her lover back to life, enabling her mortal lover  Aragorn to lead the Fellowship and an army of the undead to victory.

“I would rather be a ghost drifting by your side as a condemned soul than enter heaven without you. Because of your love I will never be a lonely spirit.” – Chow Yun Fat as Li Mu Bai

The anti-Romeo and Juliet, these masters of self-control put their love on hold until it is too late, acknowledging their love for each other as Mu Bai dies in Shu Lien’s arm. A powerful, heart-breaking tale of strength and self-sacrifice.

“I thought you looked like Christmas morning.” – Brad Pitt as John Smith

Jane and John Smith started out hot and heavy but after the honeymoon phase is over their romance goes cold. The spark their relationship gets is the exact same reason they came together in the first place: A mutual appreciation for taking risks.

Comic book nerd Clarence Worley gets the surprise of his life when he meets his dream girl Alabama and her suitcase full of coke. Their whirlwind relationship is tested from the get-go, but they make it over each hurdle by only focusing on surviving together.

Opposites attract. At least, that’s how Han Solo and Princess Leia initially perceive each other when they are thrown together in Star Wars: A New Hope. Slowly they go from trading barbs to trading kisses, proving that love is for the strong-willed.

Special Thanks to Sarah Deborah, who was all too happy to co-author this list of love.