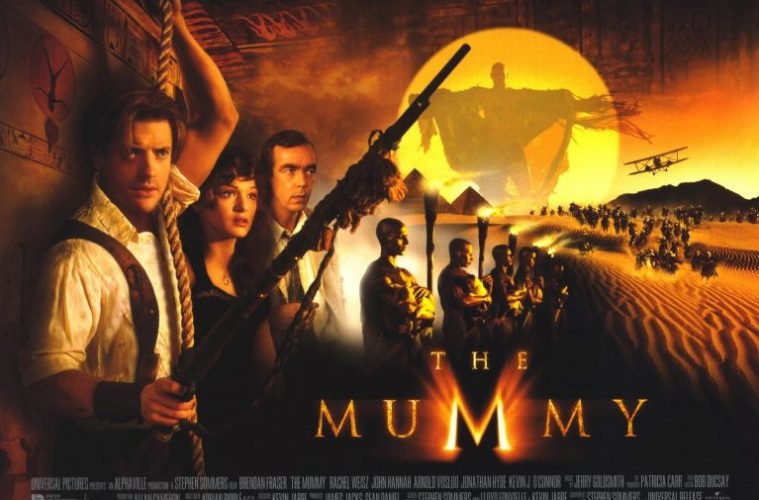 The Mummy franchise is one of the most beloved in cinema history. With the original movie starring Boris Karloff as the Mummy hitting screens in 1932, it spawned a whole series of popular sequels. But the strange thing is, I’ve personally yet to see any of the original movies. So my first entrance into the Mummy world came in 1999, when director Stephen Sommers (Who had previously directed the extremely awesome ‘Deep Rising’) brought the first of a new trilogy to the cinema. With star talent like Brendan Fraser, Rachel Weisz, Arnold Vosloo and John Hannah starring in ‘The Mummy’ and a quality action director like Sommers, it could only be a success.

‘The Mummy’ tells the story of Imotep, a high priest who falls in love with the wife of a Pharoah, and is punished by being mummified and buried alive in a rare ritual of cruelty for his crimes. With Evie, a disaster-prone librarian (Rachel Weisz) and two teams of rival treasure hunters, led by Rick O’Connell (Brendan Fraser) and his twisted friend Beni (Played by the brilliant Kevin J. O’Connor), racing to the mysterious hidden city of Hamunaptra in Egypt, they find the Book Of The Dead and the remains of Imotep and his slain love, and unwillingly bring the vengeful priest back to life to set him on a course of total terror and destruction, as he now intends to give himself new life at the expense of those who awakened him, and bring back the woman he has loved in life and death.

‘The Mummy’ is a true blockbuster, in every sense of the word. There is a list that must be adhered to if a movie is to be a blockbuster. A stellar cast, a wonderful team of director and producers, a spectacular soundtrack score and thrills that only come from a massive movie like this. And ‘The Mummy’ delivers on all of those fronts. A stunning mixture of hilarious comedy from the movie’s many misfit characters (Including a fantastic performance by British comic great Omid Djalili), nerve-shredding terror curtesy of the title character (Arnold Vosloo is magnificent as Imotep) and his mummy army from hell, and more spectacular action than most movies could ever feature. The action sequences are especially stunning, including a flame-ridden boat shootout and Imotep’s many terrifying plagues, with a locust scene that all these years later is still incredible to look at. Action movies don’t come much bigger than ‘The Mummy’. And with a sweet romance between Rick and Evie brewing up, there are many tender moments that flesh out the movie, in between the chaos and thrills. Brendan Fraser and Rachel Weisz not only act great together, but they make a convincing on-screen couple too.

As with most reboots, ‘The Mummy’ has its detractors, who prefer the classic Karloff original. Some people don’t like the legends being messed with. But as someone who’s never seen those movies, I’ve nothing but love for this reboot. And ‘The Mummy Returns’ is even greater, and has the awesome addition of Dwayne “The Rock” Johnson as the Scorpion King. I will review that movie very soon, along with the final entry of this particular franchise, ‘The Mummy: Tomb Of The Dragon Emperor’. ‘The Mummy’ is a wonderul movie experience. Visually breathtaking, intensely exciting and plenty of scares to satisfy most horror fans, this is not only one of the best movies of the 1990’s, but one of the best movies of all-time. It’s no wonder it’s hung on to its loyal fanbase (Including myself) for so long.

Next month will see the latest reboot of ‘The Mummy’, as part of a new series of Universal movies focusing on the classic monsters, when the world’s biggest movie star Tom Cruise takes on the now-female dastardly villain, as she destroys London in her quest for reign upon the world. To say I’m excited for this movie would be an understatement. Enjoy these two amazing trailers for the latest incarnation of ‘The Mummy’. It will be released next month.