Netflixing Under the Influence: A Throwback Edition With the ‘Original’ THE FAST AND THE FURIOUS… No, Not That One

Did you know that the multi-billion dollar The Fast and the Furious franchise has roots in the pulpy 50’s films of American International Pictures?  It’s only a tangential relationship, but the producers of the 2001 street racing Point Break rip-off were so hot on the title of this 1955 film they paid for the rights.  There isn’t a trailer available for this early oddity, but I found a pretty funny video where someone cut the audio from the big-budget Vin Diesel franchise into clips from the 50’s flick.

This was the very first picture produced by AIP, and it must have done well for them because they brought back director Edward Sampson for a movie that should be familiar to regular Netflixing Under the Influence readers: High School Hellcats.

This wasn’t even on my Queue, but simply came up when searching for The Fast and the Furious movies on Netflix’s streaming service.  I watched this very late at night after a party, but barely remembered anything about it.  So then I watched it again about a week later.  I had a 12-pack of Natty Light in the fridge that I put a nice dent in while watching.

In what is one of the most daring creative decisions we’ve seen here at NUI, The Fast and the Furious opens with an out-of-context car crash and explosion.  Bam!  Title screen.  It’s just a few seconds of a truck flipping down an embankment and getting engulfed in flames for no reason.  Typically, an action scene for the sake of spectacle before there are any stakes of character or story is a bad idea, but it’s such a simple touch to just blow up a truck for the heck of it that I am already totally on board. 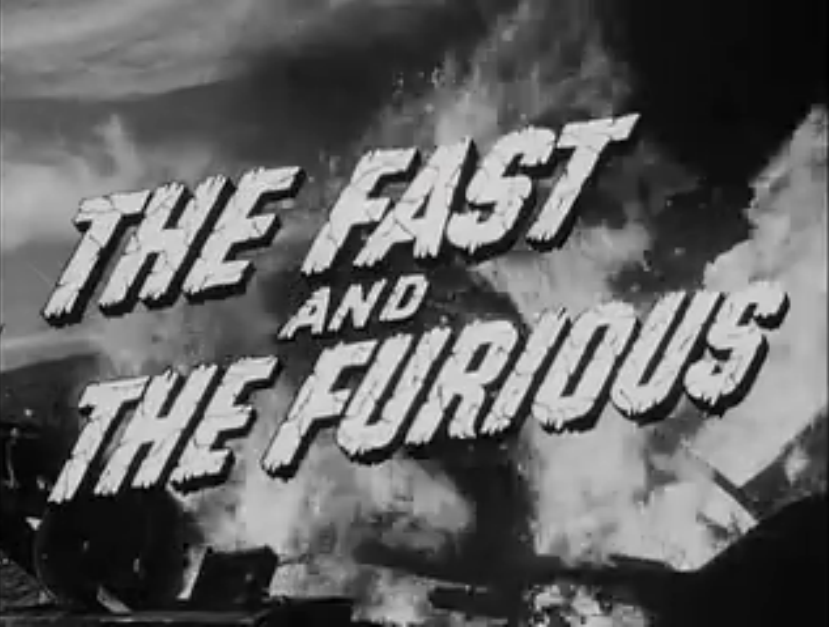 Later, a woman named Connie (Dorothy Malone) gets out of a super sporty white (or yellow, if the colorized poster is to be believed) Jaguar in a parking lot and heads into a diner.  As she makes conversation with the woman behind the counter and a talkative trucker, it’s revealed that she’s on her way to a treacherous, off-track race.  The news reports of an escaped convict named Frank Webster (John Ireland) come up as well.  It seems he’s on trial for murder after running a truck off the road (ah, that’s what the opening was) and broke out of prison.  After a few questions from one of the patrons, it’s revealed that the anxious man sitting in the corner is Webster himself.  He knocks out a guy and steals Connie’s car, taking her along at gunpoint. 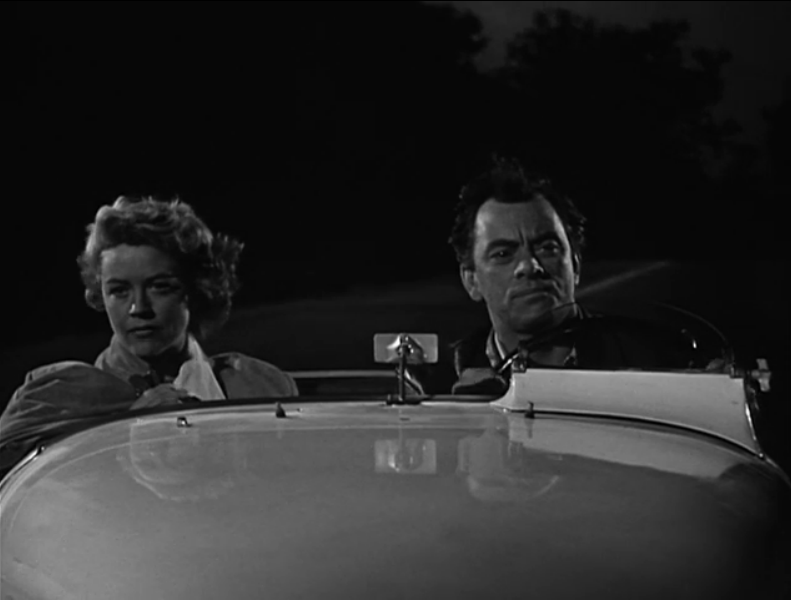 The good news (for Webster, at least) is that her race takes them right by the Mexican border.  It’s a great cover for him to get away from law enforcement while hiding amongst the throng of fast-moving cars.  It seems an unnecessary precaution, however, because he doesn’t really have to hide that much.  Nobody knows what the criminal on the lam is supposed to look like and everyone who Frank and Connie come across is really helpful.  In fact, each scene of tense interaction is increasingly more laughable than the last.  When he sees a motorcycle cop, freaks out, guns the car in the opposite direction leading in a chase, and eventually comes to a stop due to Connie’s sabotage, the cop is unrealistically amiable.  “Whew!  I thought you’d never stop,” the officer says.  “I thought you were trying to get away from me… Anyway, your tail light’s out. Save the speed for the races!  Have a good one.”

Later, another racer innocently updates the duo on the gossip about catching Frank.  “They figured he’s going to be driving a Jaguar.  Hey… that’s a nice lookin’ Jag you got there!  Also, he’s supposed to have a young woman with him.  If you see him, his name’s Frank Webster.  Welp!  See ya later!”

Even later, Connie runs into a friend who invites them over to her place since her parents won’t be home.  All’s gravy until she mentions it’s because her father is the sheriff and will be out leading the manhunt for Frank.  When he immediately panics and hightails it out of there with Connie, she makes no bones about it. 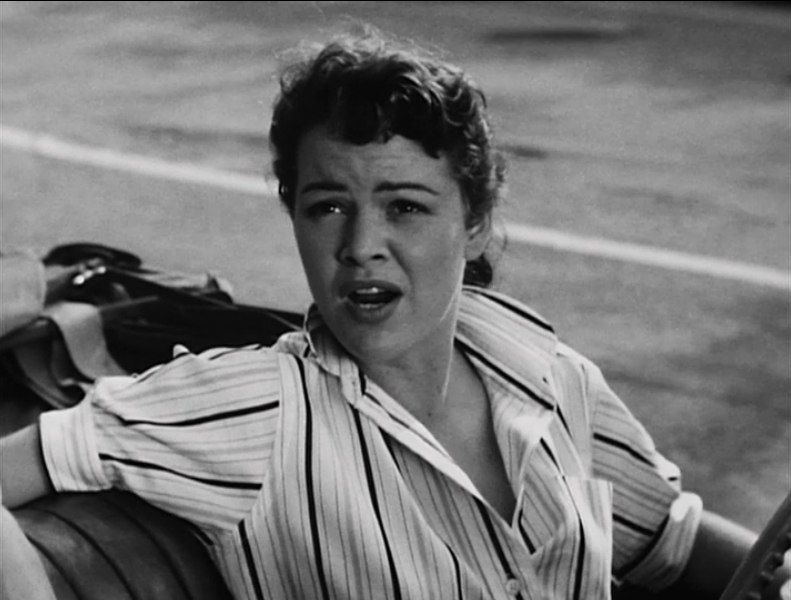 From the above descriptions, it may seem like Connie’s going along with all this, but she tries to get away pretty often.  Her actual attempts, on the other hand, are exceptionally unslick.  One time she bolts in full view of him.  The second time, she simply tries to open the car door when he stops for a brief second.  Another time, she just tries to run again.  It’s a risky strategy since she seems to forget he has a gun, but forgivable since he seems to forget it too.  He only pulls it out twice in the whole movie, and never when it might do him any good.

Most of the time, she just complains about being hungry.  She whines about food on five different occasions early on in the kidnapping.  In one sequence she stares lustily at an old man holding a sandwich like Oliver Twist at a Cutthroat Kitchen taping.  Despite all her attempts to break free, when they finally get to the race, Connie inexplicably softens on Frank.  “The only thing I got against you is I never got that egg salad sandwich,” she says.   She starts laughing when he magically whips a sandwich and a thermos out of his pocket.  What she doesn’t question is how long it’s been stewing there in his pants since they’ve been attached at the hip the whole movie. Ew.
It’s here that Frank explains all he wanted to be was a truck driver, but he was muscling in on some trucker magnate’s turf.  When the powerful boss sent his goons after him there was a chase and one of the cars flipped off the road and exploded.  “Why don’t you just await trial, since it clearly isn’t your fault?” Connie reasonably asks.

“Aw, you know what it’s like when they’ve got it in for you!” Frank cryptically replies.  It’s the crux of the story and a weak one at that.  Eventually they hole up in a barn and clearly bone the afternoon away.  The Hays Code may have stopped the sex from being too explicit, but they kiss passionately and it fades directly to them cuddling in a pile of hay.

Connie’s not allowed to race, despite being the actual driver, because the powers at be deemed the course too dangerous for women.  So, since she can’t come with him, Frank deems it safer to lock her in the barn.  See, she’s been so insistent that he should try and prove his innocence that she’s trying to turn him in for his own good.  When she finally breaks out of the barn, the race is already well on its way, but she does her best to get police involved.  From an action perspective, the big race scene and resultant chase doesn’t quite work.  The stunt driving consists mainly of static shots of cars barreling down straightaways crosscut with too many rear screen projection effects shots. 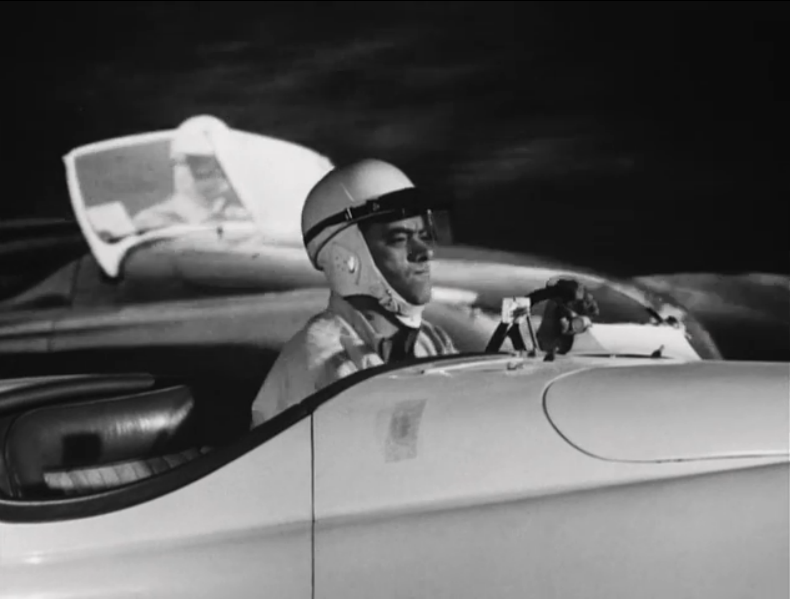 Didn’t I mention that the movie cooks off with an explosion!? 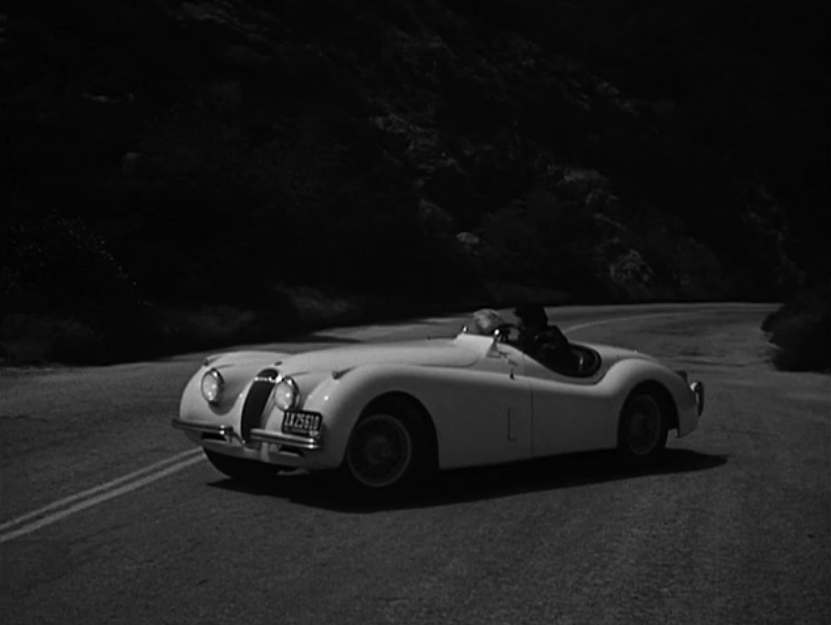 The entire Stockholm Syndrome romance is beyond unbelievable.  Over the 73-minute running time, the filmmakers have almost no focus on making the abusive Frank more understanding or showing why Connie does a 180 from hating her captor to literally rolling in the hay with him.  The only hint is that he tells her the story about why he’s innocent of murder (but still guilty of kidnapping, grand theft auto, assault, speeding, and resisting arrest) and because he gives her that sandwich.  On second thought, her major character trait is “I want a sandwich”, so maybe it is believable…

Also, Connie’s an absolute idiot.  Remember how Frank locks her in the barn and I glossed over how she escapes?  That’s because she sets the barn on fire while she’s inside on the off-chance that someone sees the smoke and saves her life.  That way she is able to turn in her new boyfriend to the cops so he can go to trial and prove his innocence.  The alternative of letting Frank escape to freedom and not almost setting herself on fire doesn’t seem to occur to her.  In contrast to this mind-boggingly strange sequence, there is one moment of girl power where the characters admit that it’s silly and paternalistic to ban female drivers from the race since she, along with a few other women, are the best and fastest drivers out there.  It’s a throwaway line, but only stands out all the more in a film whose Wiki page synopsis contains the following problematic line: “But she soon proves a difficult hostage… which leads him to treat her more roughly than they both would prefer. This mutual struggle soon leads the two to fall in love with each other.”

For a short movie The Fast and the Furious was a touch repetitive.  Frank and Connie drive.  They narrowly escape detection by a moron who can’t tell that Frank is clearly the criminal everybody is looking for.  The couple violently argues.  Repeat.  The reason I watched this a couple times is because I kept forgetting what happened in a certain scene to spur the next action beat, but on rewatch I’d realize I didn’t remember because nothing actually happened.

Notwithstanding all these obvious drawbacks, it’s not a bad watch.  There is something charming to the retro, light-exploitation feel.  And frankly, it’s somehow less dumb than the first movie in the modern day heptalogy.

As The Fast and the Furious is in the public domain, you don’t even need Netflix to watch it.  It’s pretty easy to find on YouTube.