Netflixing Under The Influence: YAKUZA WEAPON Has A Gun Made Out Of “Nude Woman.” (#ChooseYourWeapon)

It’s #ChooseYourWeapon month this February at Action A Go Go, which means we’re going to be diving into the best and most gruesome ways to die in the world of action.  One genre that relies heavily on surreal weapons is that of ultraviolent Japanese action films.  In Ichi the Killer super-sharp blades protrude from the heels of Ichi’s shoes, Machine Girl involves a school girl with a chaingun for an arm, and Helldriver had an actual car that could swordfight.  Yakuza Weapon is no different:

Unfortunately (for a movie like this, at least), this was viewed all alone in the comfort of my own home.  I was partaking in some Jack Daniels and Diet Cokes.  Despite the fact that I prefer Jim Beam as a liquor to mix with cola, my local liquor establishment was out-of-stock so I settled for Jack.  It’s potable, but doesn’t have the light sweetness of a strong Beam & Diet. 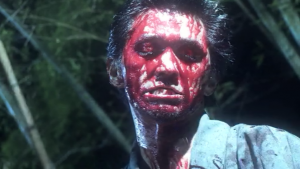 Like many of the splatterpunk manga films, Yakuza Weapon is chock full of unreal Yakuza violence undercut with an enthusiastically profane tone.  Co-writer and co-director Tak Sagakuchi plays Shozo, the wild child of a crime boss who leaves behind the criminal life to fight as a mercenary in the jungle.  When his father is murdered by rival boss, Kurawaki (Shingo Tsurumi), Shozo comes back to town and starts to leave a bloody trail of retribution in his wake.  Unfortunately, in an early showdown with the villain, he’s shot to pieces by a helicopter… but not before blowing up the helicopter with Kurawaki in it.  This being essentially a live-action cartoon, however, neither of them are down and out for too long.

Kurawaki is revealed to have been kept alive by a weaponized mech suit, which he uses to aid in his kidnapping of Shozo’s old flame, Nayoko (Mei Kurokawa).

However, the stakes are evened (in keeping with the “Choose Your Weapon” theme of this month) when Shozo’s arm is replaced by a gatling gun and his leg is replaced by a rocket launcher.  He creates even more havoc as he hunts down Kurawaki and his minions of zombie-ninja-gangster-whatevers.  Eventually he finds himself face-to-face with old companion Tetsu (Jun Murakami), who is being mind-controlled, but was already losing his sanity a bit after witnessing the brutal murder of his sister.

But this plot point with Tetsu is what leads to the money shot, and the major qualification of this movie as a worthy entry into a month celebrating the most extreme weapons in all entertainment.  Tetsu’s sister’s body is converted into a naked, robotic Swiss Army Knife with a machine gun mouth, bullet-firing toes, a rocket launching vagina, and bulletproof skin.  At first glance the idea of a villain violently flinging around a naked woman during a climactic fight is so excessively juvenile that it comes across as thoughtless and offensive.  It’s a provocative idea that only serves to turn the audience off (or turn them on if their sexual predilections border on the criminal). 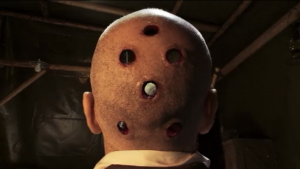 However, the strongly tongue-in-cheek tone of Yakuza Weapon potentially puts forth another interpretation.  When Tetsu’s sister is cruelly raped and murdered, the irony of filling her lifeless body’s orifices with weapons and literally using her as a tool of rampage couldn’t have been lost on the filmmakers.  Is it possible that they are satirizing the objectification of women?  Action films all over the world boil female characters down to sexual beasts as a source of titillation or victims of severe brutality.  Using the idea ironically isn’t that far-fetched given the rest of the film’s aggressive irreverence.  Ultimately, this movie is a spoof.  When the kidnapped Nayoko is threatened with torture by various sex toys, her reaction is one of total bemusement as opposed to fear or horror.  Even Shozo’s potently murderous streak is seen not as a positive trait, but as a purposefully dumb two-dimensionality commenting on the one-track mind of the average vengeful protagonist.  Or… the “sexualized woman gun” is simply an idea someone had so a character could attempt to win the day by fisting a naked robot.  Regardless, it is clearly the centerpiece of the film. 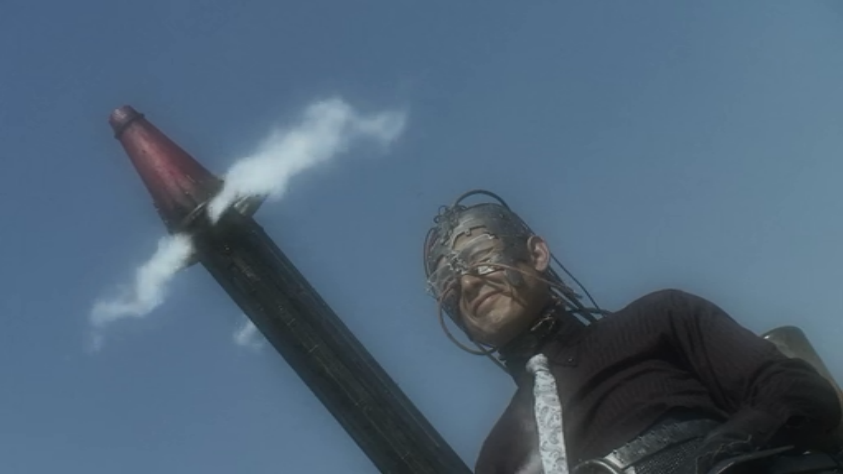 After Shozo defeats Tetsu, he takes on Kurawaki.  The also robotic villain explains that his penis rocket is actually a nuclear weapon that will go off if he is killed, which doesn’t even seem ridiculous at this point.  Shozo expresses the nihilistic apathy of an entire generation when he mentions he isn’t afraid of nuclear weapons and sets off the explosion anyway.  In my book, movies that end in nuclear holocaust get an extra point for ballsiness… which is why I’ve somehow found myself becoming a reluctant defender of both Terminator III: Rise of the Machines and Beneath the Planet of the Apes over the years.  And if anything, this movie is ballsy.  Shozo doesn’t save the girl, he blows her up (along with everyone else).  In fact, he admits multiple times that he’s not even interested in revenge for his father’s murder.  He just likes going nuts and killing people.  Yakuza Weapon is a medium for badly CGI-ed blood and explosions masking an uncharacteristically sharp parody.

Throughout most of the movie, the incredibly poor special effects heighten the surreal nature of the action and really hammer home what a mistake it would be to take this one at face value.  Amid all the unbelievable weirdness, a bare bones tracking shot I timed at roughly 4 1/2 minutes sees Shozo taking out a series of villains in hand-to-hand combat.  The fight choreography might be subpar and the camerawork is gimmicky and pedestrian, however the technique is still surprisingly effective.  Sagakuchi exudes intensity during this sequence and that truly goes a long way into selling the effort of the scene. 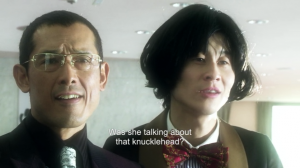 It won’t go down in history of bravura moments, but in contrast to the surrounding hyperkinetic film, it’s definitely memorable.  It wasn’t until later that I discovered that Sagakuchi reportedly broke his neck while filming the scene.

Speaking of intensity, the sheer energy in which all the actors commit to the spoof-y tone serves to help me forgive the many drawbacks.  Tak Sagakuchi, especially, inhabits his role like a man possessed.  A cigarette hangs from his lower lip constantly as he struts back and forth like a caged animal, often exploding into primal screams and one-liners (“I love this new body!  It kicks ass!”).  The character of Shozo is a monster, yet still works quite well as a protagonist.  The absurd humor is neither as broad nor as corny as many of its contemporaries.  And despite being so tongue-in-cheek, it doesn’t go as off the rails as other Sushi Typhoon flicks tend to do.

Frankly, Yakuza Weapon doesn’t really make much sense.  The narrative is equal parts bare and meandering as element after element is added to the straightforward revenge story.  Each additional subplot is simple (the entire character of Nayoko, the group that rebuilit Shozo attempting to control him with a killswitch, etc.), however quickly introduced and forgotten in a manner that only leads to a lack of cohesiveness.  Both Shozo’s time in the jungle and the assault of Tetsu’s sister are presented in confusing, overly long flashbacks that pop up at inopportune times.  It might seem petty to criticize a movie that clearly has no aspirations towards a compelling screenplay and merely wants to be a format for ludicrous ideas and setpieces.  However, a competent story to hang these ideas on is essential to holding the interest of an audience member.  Otherwise, the filmmakers might as well just release a series of unrelated vignettes exploring the nether reaches of their own imaginations. 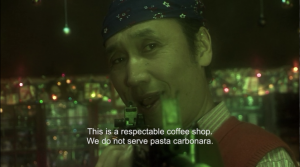 Yakuza Weapon was better than the eyeroll-inducing Helldriver, but I still wouldn’t quite recommend it.  Despite all I’ve described it was much more grounded in reality than the insane zombie movie I had reviewed earlier.  Even the portion where Shozo destroys several dozen floors of skyscraper from the lobby because he is too lazy to climb the stairs to get at the villain had a strange sense of hilarious logic to it.  While I found my interest waning during the short scenes where Sagakuchi wasn’t onscreen, it did feel surprisingly short for a 104 minute movie.  Interestingly enough, this is probably due to the ill-advised flashbacks and episodic action scenes.  There’s a really fun and subversive 80-minute film hiding in there though.  In fact, Netflix was right… I give it exactly 2.7 stars.

All images courtesy of Nikkatsu Corporation