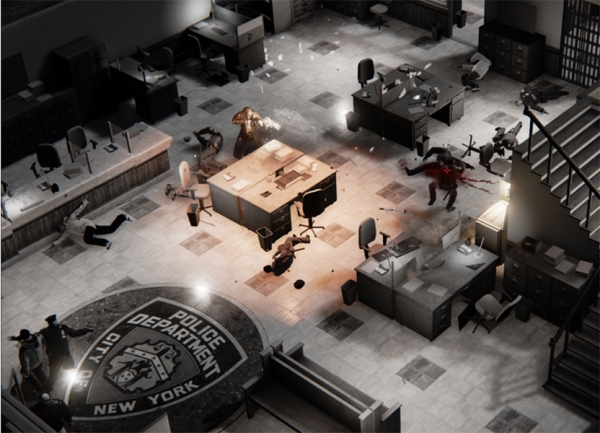 HATRED: I Haven’t Felt This Uncomfortable About A Game Since ‘Manhunt.’ (Editorial)

Coming out in 2015 some time, Hatred seems to be about some psychopath with the intent of killing as many people as possible before he’s stopped.

Okay, so that’s probably something that doesn’t sound too uncommon in gaming, right? I mean, I’ve enjoyed plenty of violent video games. Virtual gore and violence typically doesn’t upset me, and neither does the idea of killing innocent, unarmed, and/or non-dangerous characters in video games. The Grand Theft Auto series is pretty violent, but I’ve enjoyed playing pretty much all of them and going on “killing sprees” in them. Postal 2 is one of my favourite games, and is even more violent. Truthfully, I’ve gone on killing sprees in that game where my sole aim was to see how many people I could pee on and then decapitate with a shovel while they’re vomiting. Then there is Carmageddon, another series I’ve enjoyed a lot. In that game you can can win races either fair and square or unfair and un-square by killing your competitors while, for some reason, murdering all the pedestrians that are dotted around the map.

I bring all these up because, as you can imagine, killing innocent people is far from uncommon in gaming. But Hatred is on a whole different level.

The character you play in Hatred is extremely concerning (and, while I’m having a jab, poorly acted). In the following trailer, he states that he hates the world, and “the human worms feasting on its carcass.” His intention is to go out there and kill as many people as possible — to satisfy his “genocide crusade” before he gets killed himself.

What’s worrying about this is that there is seemingly no other aim to the game (I assume this because a good trailer should cover at least a basic plot), and it’s just done so…seriously. The combination of those two things alone makes me shudder. It falls in a horrible uncanny valley that is way too close to violence in real life. All the other games I’ve mentioned have some other sort of story. Murdering the innocent is not the aim of the game and when it is it’s typically executed in a comical way. Hatred just seems to hit far too close to glorifying real life events such as school shootings, terrorist attacks, etc.

Well, doesn’t that mean that this game is no different? Going by what you’ve just said, violent people will be violent — games or not, right?

Well, you see, the difference here is that in Hatred you are literally playing as a person like example number two above. There’s no humour to appeal to those looking for humour. There’s no other path to take to appeal to those looking for story options. This game just doesn’t have any other appeal than acting out being a psychopath. It essentially seems to be a murder simulator.

Think about this for a second: If someone with violent thoughts and no concern for other beings gets a hold of this game they’re going to relate to the main character. It’s only going to have them agreeing with the main characters opinions and actions, whereas other violent games can be seen as an outlet, this seems way too close to encouragement and glorification to me, and I don’t feel comfortable with it. Maybe it is a fun and genuinely challenging game to play. Maybe the mechanics are good. Maybe progression through the game is satisfying. It’s just a shame that it has to be done in such ill taste.

Mumble Etc. is a “multi-genre electronic musician” from Britain. When not preparing tea, he runs the “Mumble Etc. project,” a one-man record label. You can take a listen and shop around at mumbleetc.com.