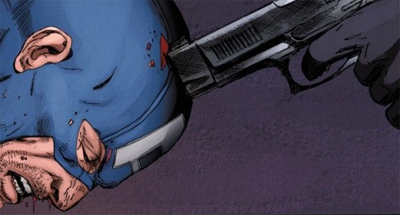 Played by actor Chris Evans, big screen Captain America seems to be a blend of two very distinctive versions from comic book lore: The “616” version and the “Ultimates” version from the comics. For most people this distinction isn’t all that important, but for comic nerds it is a serious line in the sand.

Without getting into horribly dull detail, “616 Captain America” is the designation given by nerds for nerds to describe the original Captain America from the 1941 comic books. “Ultimate Captain America” is the Captain from the early 2000s,  a version drummed up by Marvel Comics in an effort to reboot the hero for the selfie generation. Up until very recently, these two Caps existed in two totally separate universes inside the covers of their respective Marvel titles. Naturally, this created a bit of a debate about which is better.

Personally, I have a fondness for Ultimate Captain America. Back in 2001, I picked back up with comics at nearly the exact moment when Ultimate Cap was being introduced to geekdom. As a matter of fact, it was the (re)introduction of his character (alongside a few other notables) that got me hooked again. While I have no qualms with the 616 version (loved Operation: Rebirth), I totally love the ornery Ultimate Steve Rogers more.

When: Ultimates #1
Whether it’s Northern Iraq or D-Day, Captain America takes the term “drop zone” literally, leaping chest first into danger. Ultimate Cap turned jumping out of of helicopters or airplanes into his calling card. So much so that he even started doing his reckless cannonball in the 616 (during the Civil War event) and on the big screen (in Captain Ameria: The Winter Soldier).

In the 616, Hank Pym/Antman has a reputation for beating on his wife. This odd moment in regular Marvel continuity was duplicated (in a slightly crueler fashion) again in The Ultimates. The difference? In the 616, that P.O.S. Hank Pym didn’t have Ultimate Steve Rogers to contend with.

When Rogers shows up at a bar and demands for Pym to step outside, not even Antman’s super powers can save him from the humiliation that the star-spangled Avenger dishes out.

Best line: Cap isn’t satisfied shoving around regular-sized Pym, so he demands that Antman change size. Or, as Cap puts it, “Give me something to hit.”

Everything in the Ultimates line tends to get tweaked a bit for modern audiences, and I don’t think that point was made clearer than with Ultimate Red Skull.

A failed attempt to clone Captain America, Red skins his own face (hence the name) and goes on a murderous rampage. Once Captain America discovers that it’s his DNA that has run amok, he takes matters into his own hands…by ramming a jet into his bastard child. Damn.

Best line: When a detained Captain America threatens a group of French soldiers, at first, they don’t take him seriously. “Is this some kind of joke,” says one soldier. Cap pops his cuffs clean off and says, “No, the handcuffs were a joke.”

As you may have noticed, this list is comprised largely of moments that happened in the comics BEFORE Disney purchased Marvel Entertainment. Needless to say, I doubt some of this stuff would be acceptable to the “house of mouse” now that they have a multi-billion dollar film franchise on their hands.

Case in point: In Ultimate Comics: Captain America #3, Cap takes on yet another failed attempt to copy him while he was on ice. This “clone” (Nuke) came about during the Vietnam era and his disillusionment has taken a violent turn.

The story is an amazingly harsh criticism of American foreign politics, but the moment that really unsettles is when Captain America confronts God on his knees. Cap prays at first and then looks up to the heavens and angrily tells the big guy upstairs that he refuses to beg.

Best line: This isn’t a line but a fun factoid. Before hitting shelves, this mini-series had already ran into some controversy. Early images of the first cover featured a burning American flag behind the Captain. Subsequent printings have had the flag digitally altered.

Ultimate Captain America really doesn’t like the French. In what is probably his most well-known moment, Rogers delivers the killing blow to his enemy (a Chitauri shape-shifter) after delivering the line…

Best line: “Surrender? Do you think this letter on my head stands for France?”

When: Every subsequent version since The Ultimates.

Like I stated earlier, Captain America has always been a straight-shooter, but the no nonsense, bad-ass super soldier that he has become on film and even in the 616 is kind of a testament to Mark Millar and Bryan Hitch, the writer and artist originally behind  Ultimate Captain America (with the quiet assist of writer Grant Morrison).

Chris Evans or 616 Cap may not FULLY embody the post-9/11 arrogance of their French-hating counterpart, but his do-or-die attitude and costume design borrows heavily from that particular comic run. Arguably, it has helped breath new life into the character, positioning him to be a flagship Marvel title for the first time in years and inspiring an international box office draw. I’m not suggesting that Ultimate Cap deserves all the credit (plenty of props go to the likes of Ed Brubaker and Kevin Feige) but, let’s be honest, if Ultimate Cap hadn’t come along then Marvel might still be looking at 616’s Liefeld breast wondering where it all went wrong.