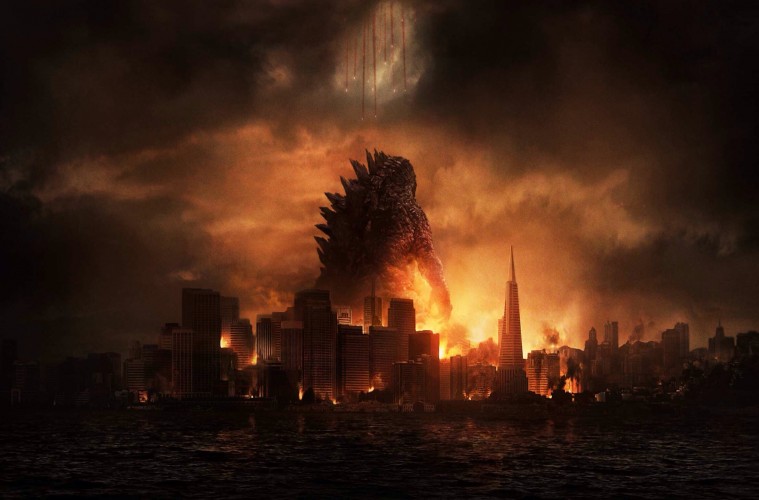 VIEWFINDER: A Review of ‘Godzilla’

Skepticism toward Godzilla, director Gareth Edward’s second feature, is entirely warranted. It’s an American remake (sequel? reboot?) of a foreign cinematic classic by a newbie director. For all intents and purposes, it shouldn’t be a good movie. Or, if it somehow is good, it should only be for the surface level entertainment factor rather than any serious artistic merit. Remakes are, after all, creative wastelands. Everybody knows this. Right?

Well, wrong. In a manner not unlike last year’s major horror revitalization, Fede Alvarez’s Evil Dead, this new shot at Godzilla is deeply enfused with legitimate creative vision. It’s a passion project, and yet another example that remakes and reboots need not be uninspired drivel that share only name and vague plot points with its originators. Godzilla is equal parts remake and homage. It tells it’s own original story (you would be surprised just how different a direction this film takes the character of Zilla) while clearing drawing it’s imagery and style from Zilla films of past. It deftly bounces between the straight-faced approach of Ishirô Honda’s 1954 original and the campier, more over-the-top feel of the slew of sequels that have since defined the Zilla legacy. It’s a love letter to monsters, in many ways similar to Guillermo del Toro’s Pacific Rim (though the tones of these two films are wildly different). It pays tribute without ever losing it’s identity as a standout kaiju flick in its own right.

The cast of Godzilla is one of its most impressive attributes. Aaron-Taylor Johnson and Elizabeth Olsen firmly establish themselves as actors with gravitas, each of whom can sell their moments with the most heartfelt sincerity, regardless of whether they’re sharing an intimate moment as spouses or facing off against a fantastical prehistoric monster. Olsen in particular stands out in this regard. Though her role is little more than acting stressed and fleeing from kaiju, she engages to the fullest extend of her ability and sells each little moment with more nuance than most actors would think to give. Of the supporting cast, Bryan Cranston and Ken Watanabe make the most of their similarly limited roles. Cranston, whose contribution is brief but memorable, delivers all of his lines with the same level of conviction we’ve learned to expect from him in Breaking Bad. Though his voice and mannerisms are familiar, his role here still feels like an entirely separate character from Walter White, proving once and for all that Cranston is not a one-note performer. Watanabe finds himself performing sharply against type in this film, shedding his usual silent, stoic strength in favor of a subtle weary, brokenness. It’s a character which runs the risk of feeling one-note, but Watanabe’s strength as a performer allows him to find the meat of it and draw it out to maximum effect.

Largely, I believe Gareth Edwards himself is responsible for the strength of the performances in this film. In a manner similar to his debut feature, Monsters, he casts his characters perfectly, giving the actor room to breathe and discover the character’s center for themselves. From a scripting standpoint, the characters of both Monsters and Godzilla could easily be rote and boring, but Edwards’ manages to burrow deeper and find the soul within each one of them. It’s an achievement of actor-director communication, a balancing act which so often gets trampled in favor of extreme focus on Oscar-baiting performances or grandiose VFX pieces. Ironically, it’s the balance of Edwards’ approach that gives him both stellar performances and jaw-dropping visual effects in higher volumes than almost any film that sacrifices one or the other. In his films, character and spectacle are elements that support rather than undermine each other.

Speaking of visual effects, my goodness gracious I will be shocked if another blockbuster comes out this year that even matches, let alone outdoes, the sheer jaw-dropping power of the imagery in Godzilla. Edwards consistently shoots his monsters for maximum awe-inspiring effect. He takes the “less-is-more” approach and handles it in a smarter way than we’ve become accustomed to in monster movies. It doesn’t take all that long before we see Godzilla in his entirety, in fact, we get a solid look at him in his very first non-flashback appearance. But Edwards subtly keeps his scale somewhat unclear by never showing the entire creature’s body all in one shot. Instead, he utilizes lingering long-shots that pan over Zilla to emphasize his almost unfathomable size. This allows the audience to familiarize themselves with the title character while still preserving the wow-factor for each time he reappears. But the visual brilliance of this film is hardly limited to the monsters being showcased. Edwards has a clear eye for visual storytelling, painting some of the film’s most awe-inspiring images without a kaiju in sight. In the films most impressive sequence, one repeatedly shown in promotional material, a squad of soldiers jump from a plane down into the dust-shrouded city below. It’s a stunningly gorgeous sequence, with an apocalyptic beauty that the typical summer blockbuster can’t even hold a candle to. It’s visual artistry of the highest form, a testament to the fact that “high art” and “low art” need not be at odds with each other, that, on the contrary, they can compliment each other beautifully.

Godzilla is a yet another remake that ushers in a new era of filmmaking. It’s an example of a filmmaker taking an existing property and making it his own while still respecting the source. It’s an excellent monster flick, an intense passion project and a reverential homage all wrapped into one. You want proof that filmmakers with vision are still making summer blockbusters? Look no further than Godzilla.
FIVE OUT OF FIVE ARNOLDS

On a technical note, I viewed Godzilla in IMAX 3D. While the IMAX component was impressive, the 3D element was almost indiscernible (as per usual with post-converted 3D). IMAX offers no non-3D option, at least not at the theater I attended. I only recommend IMAX if you’re totally willing to shell out the extra 3D cash for little-to-no effect. If you’re not, a traditional non-IMAX showing should still be impressive.