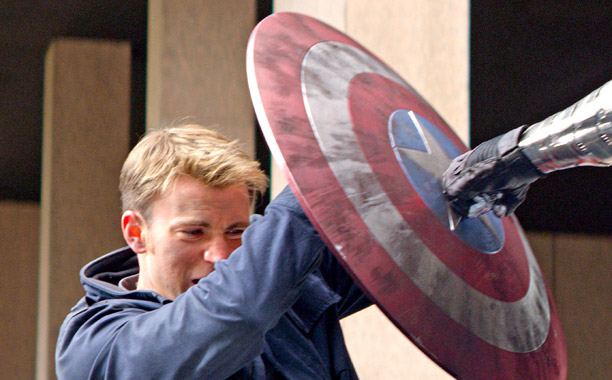 Workday Relief: The Deleted Hawkeye Chase That Almost Made It Into ‘The Winter Soldier’ And More (Video)

With Captain America: The Winter Soldier scheduled to arrive on Blu Ray/DVD next Tuesday (unless you pre-ordered through Amazon), plenty of extras from the film have been popping up online.

As the following videos weren’t enough of a glimpse into what could’ve made a great blockbuster even grander, CAWS co-director, Joe Russo, revealed on ScreenRant.com that some of the scenes that were cut didn’t just happen in pre-production but also in the script.

What it was going to be, we were trying to complicate the relationship between Cap and his S.H.I.E.L.D agent friends. If Hawkeye got a call from S.H.I.E.L.D saying Captain America is a fugitive, would he listen to that call or not listen to that call? That sequence actually was heartbreaking for us to cut it. I think it ultimately might have been a conflict with Renner’s schedule. But there was a great sequence where Hawkeye was chasing Cap through Washington D.C. there was an awesome sequence where they confronted each other in a ravine on the outskirts of D.C. and Hawkeye was shooting a series of arrows closing in on Cap, Cap closing in on him. And then Cap took him down and he realized for the first time that Hawkeye was trying to trick S.H.I.E.L.D, where he whispered something into Cap’s ear that Cap had a tracker on his suit and to punch Hawkeye to make it look real, because there was a Quinjet hovering above where they were watching the feedback back at S.H.I.E.L.D.

So it was a cool sequence. But look, there’s a million iterations of films, and especially when dealing with Marvel movies where characters can come in or come out during the creative process. And you keep working and working like a Rubik’s Cube till you find the right configuration where everything lines up. So even though we lost that sequence, I think we may have streamlined the movie and made it a little bit more propulsive.

Don’t worry, however, Hawkeye fans. Jeremy Renner will be reprising his role in next summers Avengers: Age of Ultron and rumor has it that he will have a far more significant role to boot.