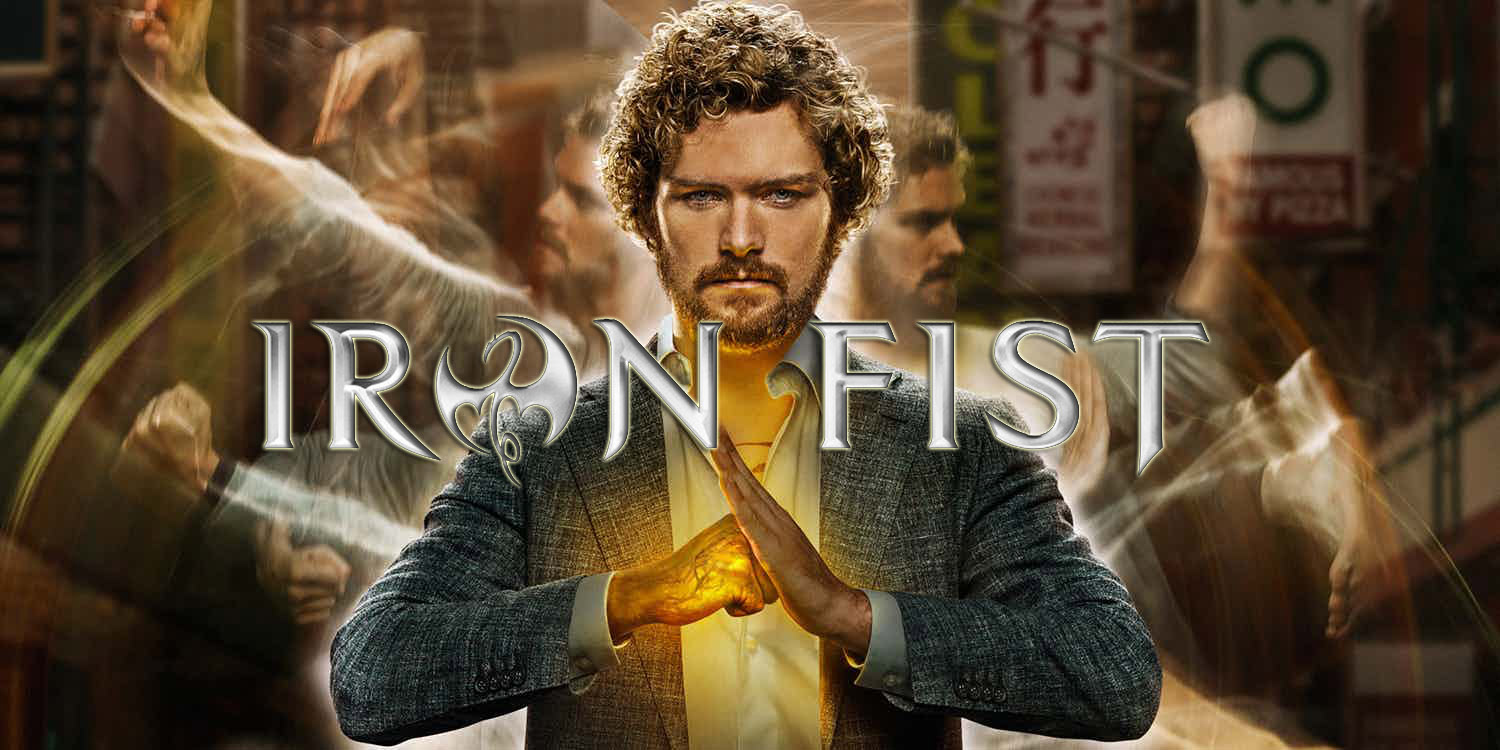 SHACK HOUSE: “MARVEL’S IRON FIST” AND HOW THE CRITICS WERE MOSTLY WRONG

Before it officially aired, Marvel’s Iron Fist was getting hammered by critics just off of the viewing of the first six episodes. While I didn’t read any of their reviews, it did give me pause to consider having reservations about the series. I didn’t want anyone else’s opines to cloud my own as I started viewing it, but I wondered if they could be right. Though some of Marvel’s on-screen properties aren’t all that, they’re not bad either. But Iron Fist was the one that had me worried about breaking the critical acclaim streak of the Marvel Cinematic Universe. Hell, before the six episodes even aired, Finn Jones being cast as the title character was getting backlash. Some wanted an Asian actor for the role instead of Jones, nevermind the fact that the character’s a White guy in the book. After spending last Friday and Saturday binging on the series, I’ve concluded that though the series didn’t make as big a splash as anticipated, Danny Rand’s fish-out-of-the-water trope caused some significant ripples in the pond.


PLOT: It starts off with a 20-something-year old named Danny Rand (played by Finn Jones) returning to New York City only to find it not as he remembered it. He comes off as a crazed, homeless vagrant with no shoes. He’s been away from the world for about 15 years and has been declared dead ever since. Danny and his wealthy parents were in a plane crash over the Himalayan mountains. But what the world didn’t know was that Danny was the only survivor. He was 10 years old at the time and was immediately taken in by monks from K’un-L’un, an other-dimensional city that materializes on Earth once every 15 years. It is here where Danny learns martial arts and discipline, and gains enough power to become the Iron Fist, the greatest and most powerful warrior in all of K’un L’un. He returns to Earth 15 years later to find out what happened to his parents and to re-establish ties with his old friends Ward and Joy Meachum (played Tom Pelphrey and Jessica Stroup, respectively). The Meachums now control Rand Enterprises spend a good deal of their screen-time turning Danny away every time he attempts to convince them of his identity. 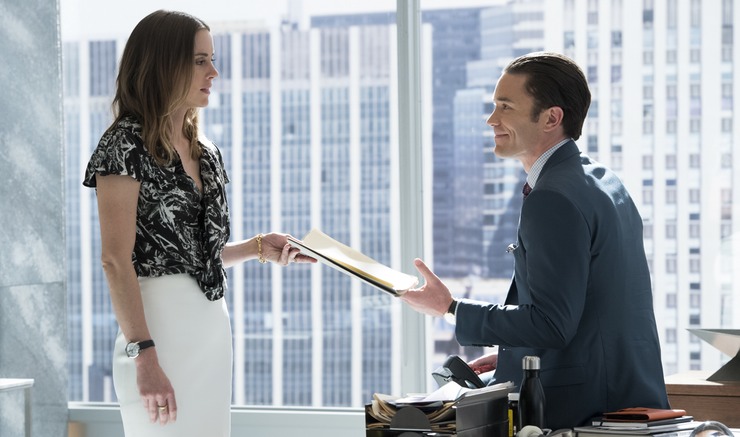 The Meachum siblings doing what they do best.

Along the way, Danny meets self-defense instructor Colleen Wing (played by Jessica Henwick) and manages to convince her of his story after a somewhat rough start. Danny wants the company which is rightfully his, but his return has caused a shake-up with the Meachums. They’re both angry, confused, and upset that this person claims to be their friend who supposedly died years ago, but only Joy entertains the possibility that he’s telling the truth. After brief forced stay in a psychiatric facility, Danny reconnects with Joy and Ward (to a degree) and becomes the majority shareholder of Rand Enterprises thanks to the legal maneuvering of Jeri Hogarth (Carrie-Anne Moss reprises her role from Marvel’s Jessica Jones). But Danny is naive in how the world has changed in his absence. He takes an anti-greed, anti-capitalist approach to running his corporation which does not sit well with the board of directors. But corporate boardroom battles aside, the villains are the shadowy ninja organization known as the Hand. Also, the Meachum’s father, Harold (played by Australian actor David Wenham) is an unstable, controlling baddie who’s cheated death thanks to the Hand and has been at their mercy manipulating his children from behind the scenes ever since.

Not surprisingly, but quite welcome, is Rosario Dawson’s return as Claire Temple, the Night Nurse. Her involvement in Danny Rand’s quest for truth and revenge began when she met him while she was being taught self-defense by Colleen Wing. Together, the three of them travel abroad to remove the Hand and their influence from Rand Enterprises. But we learn as the series progresses that the Hand rolls deeper than the mobb. And furthermore, there are separate warring factions of the Hand, one of which seeks to drive the bad element (i.e.: The ones seen in Marvel’s Daredevil) out for good. The season ends on a cliffhanger, one that may be addressed next season or in the upcoming Marvel’s The Defenders. 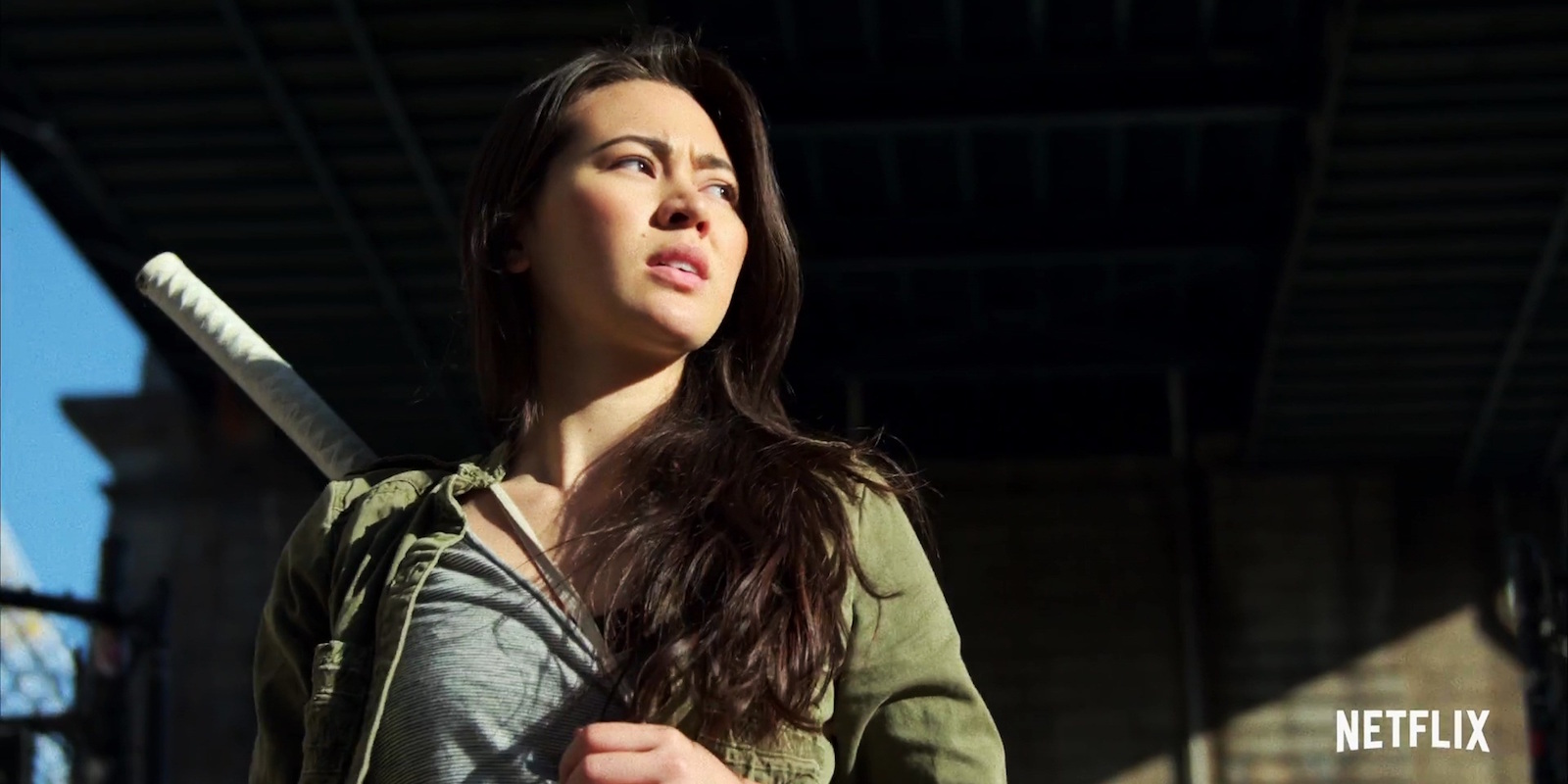 MY TAKE: Marvel’s Iron Fist wasn’t as bad as critics said it’s been. But if one were to rate Marvel’s Netflix shows from strongest to weakest, this one would be at the bottom. I wasn’t bothered by the casting of any of the characters, only that the story felt clunky in most parts. While it connects with previous shows, the story just goes all over the place. There were only two fight scenes that were actually good (Rand’s first fight on-screen and Colleen Wing’s cage fight), every other fight scene felt underwhelming. There were some Easter eggs in here, though: Hogarth’s reference to Jessica Jones being her private investigator while digging up dirt on the Meachums, Rand Enterprises being behind the radioactive waste that blinded a young Matt Murdock, the Stan Lee poster in one of the later episodes, and several hip-hop references that hark back to Marvel’s Luke Cage. As a fan, that was cool, but I kind of felt that making Rand a hip-hop fan and having Claire Temple name-drop the contents of Rand’s iPod (Big Pun, Blackalicious, and Boogie Down Productions) was a sort of pandering.

As stated earlier, I think Jones portrayed Danny Rand as a fish-out-of-water. He’s been gone from Earth’s dimension for fifteen years and hasn’t caught up with how the world has changed in his absence. As a result, there are times he comes off as a naive, immature man-child. Tom Pelphrey does the best acting of the whole cast, playing Ward Meachum’s generally dickish attitude to a hilt. I’ve liked Jessica Stroup ever since The Following (2013-2015) and she usually plays level-headed adult roles. But here, she’s a morally-compromised woman who wants to do the right thing, but also wants to maintain her wealth and lifestyle as well. She and her brother are business-minded and apply that thinking to most aspects of their lives, even their interpersonal relationship with Danny. One of the few people whom Danny re-establishes connections with is Jeri Hogarth (whom he affectionately calls ‘J-Money’ from his childhood memories of her). Moss’ Hogarth maintains some of her coldness from her last appearance in Marvel’s Jessica Jones, but quickly warms up when she realizes that he’s telling the truth about his identity. Harboring enmity towards the Meachums, she enthusiastically helps Danny gain control of the company and serves as a past connection that works to humanize both of them. Harold Meachum was boring as the manipulating father who can’t seem to die. He was a villain that didn’t terrify me, even with his dastardly acts and clear mental instability. He functions as the villain who killed Danny’s parents and as the secret driving force behind his children’s actions. Madame Gao (played by Wai Ching Ho) leads the bad faction of the Hand and upstages him every time. He fears her, but even she feels that he doesn’t know his place. Rosario Dawson’s Night Nurse provides the much-needed modicum of dry humor for the series. She no longer works at the hospital, but continues to follow her Nightingale Pledge as a nurse. 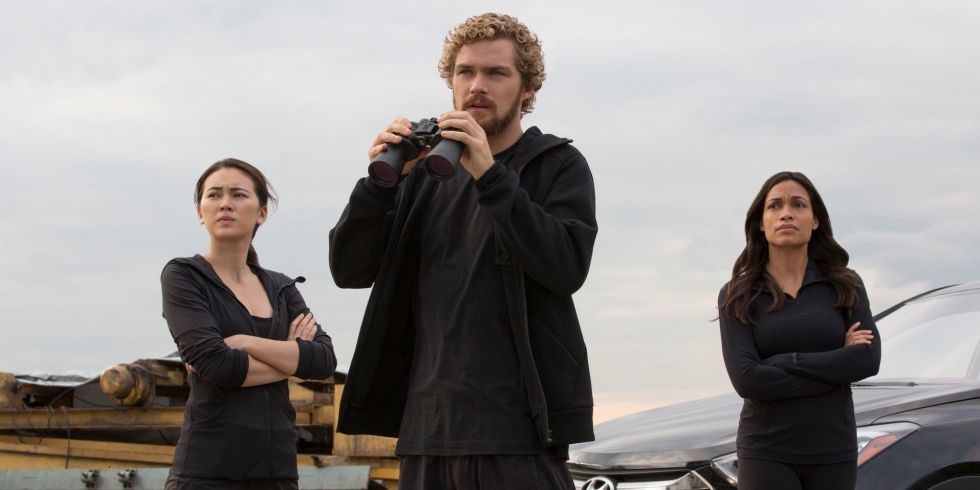 And now to the obvious controversy of cultural appropriation. One of the biggest criticisms before the show even aired was that they didn’t cast an actor of Asian descent in the title role. Critics and “fans” (who are really disguised social media crusaders) have complained that a work of fiction surrounding eastern philosophy and martial arts should have an Asian person as the main character. To that, I say “SHUT THE HELL UP!”. The character of Iron Fist is, in fact a White man, always has been. But sadly, people don’t realize that their attempts to over-correct actually only perpetuate prejudices of their own. Iron Fist follows a similar format to David Carradine’s Kung Fu (1972-1975) and Bruce Lee allegedly created the series’ concept before it was implemented. Bruce Lee himself was responsible for bringing the martial arts trend to America and was friends with many celebrities (James Coburn, Kareem Abdul-Jabar, et. al.), and even trained some of them. That said, nothing in Marvel’s Iron Fist can be considered whitewashing or cultural appropriation. Making Martial Arts expertise an exclusive province to just Asians is a form of racism and stereotyping, especially as we know that many people of all races (Whites included) are experts at it. If anything, the two aforementioned shows actually appreciate Asian culture rather than appropriate it. On the whole, Marvel’s Iron Fist has several rooms for improvement. Perhaps in later appearances, they could have a more compelling villain and a more focused story with better action sequences. What would be of big help is to do what fans have wanted on-screen: Him and Luke Cage teaming up and do Heroes for Hire. But for now, I’ll cap off with two words that encapsulate my thoughts on the series: Needs work.