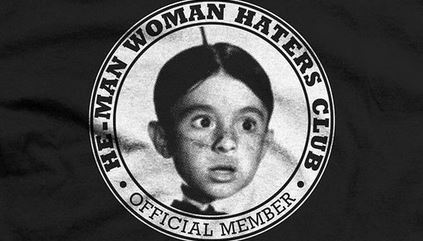 Gamergate: Engaging Our Geek Male Entitlement Online And Off (Editorial)

I was born a male. I have lived my entire life as a male and, barring something unexpected, I expect to die a male. It is not a source of pride, really, but an incontrovertible and undeniable aspect of who I am. I am a male, my astrological sign is Leo, I wear a size 11 1/2 shoe. These are simply facts about who I am.

I considered myself an “enlightened man” long before I’d even hit puberty. Owing largely to a strong maternal figure and a liberal upbringing, along with generally being more bookish than rowdy, I had a cadre of platonic girl friends at an early age (which, incidentally, endeared me in no way to the boys at school). I was raised to respect women, to assume they were as intelligent as any man. And for a long time, I thought I did adhere to these beliefs — even admitting an opposite sort of prejudice where I expected more from women than men because I think women are generally smarter and better at constructing logical arguments.

And so I went in my smug little way, happily traipsing along, silently denouncing the cat calls of blue collar workers and frowning disapprovingly at my friends’ misogynistic comments. Whatever vitriol being heaped upon men by feminists certainly did not apply to me, because I was an Enlightened Man.

Recently, it began to dawn on me that I may have been — to borrow a French phrase — full of shit. There has been lots of warranted feminist outrage on the internet lately, from #GamerGate to the wrongful termination of Jennifer Williams, to the #YesAllWomen Twitter campaign, it seems like women are using the digital platform to take a stand for themselves. My gut reaction was to largely ignore these controversies because I didn’t think I should get involved. Surely I’ve never denigrated a woman or made her feel uncomfortable. I’m one of the “good guys,” the fellows that compliment ladies on their clothing and ask women for relationship advice and only look at their boobs for a few seconds rather than entire minutes. I believed I was supporting the fight for feminism by not diluting it with my testosterone. And then I decided to go against common sense and check the comments section.

Fyi, Harrison’s Comics and Collectibles in Salem MA has a “rape room”, dubbed such by the owner’s friend Julian who is acting as manager.

I was absolutely stunned by the aggressive, angry responses I saw to these current events. Venomous, hateful threats of violence and rape. Denouncing what women wrote as divisive libel, women being called “stupid” and “fake” and “sluts.” Claims that women should take their grievances to lawyers or the police–I suppose to the Men Are Being Mean To Me Department, headed by Sergeant Don’t Worry Your Pretty Little Head–instead of bringing these discrepancies to light. It made me ashamed to have been born a male. And that’s when it dawned on me that perhaps I have been an unwitting misogynist all my life.

I have never physically hurt or threatened a woman, I don’t think I’ve even yelled at women. But I’ve definitely dismissed women for being “hysterical” or “crazy” when they complained about inequities. I’ve certainly leered at women inappropriately–and thought I was somehow better because I did it quicker than some other men. I’ve told women I like their blouse or hairstyle, never thinking that maybe women in specific and people in general don’t feel like striking up casual conversations based around the fact that you’ve been scoping them out.

At a young age, I was taught that if you like a girl, go ask her out; the worst she could do is say “no.” I wasn’t taught to respect others’ privacy and not to open a relationship by asking someone to entreat partnership with a stranger. The discrepancies between my thought and deed piled up. I considered myself a swell guy for considering most men idiots while regarding most women as geniuses. It didn’t occur to me that I was actually giving guys a pass while rigorously subjecting women to my expectations.

As it turns out, I am a male, and I feel all of the entitlement that men feel towards women–that they should be grateful for my existence, that they should be buoyed by my attention, that somehow I was doing them a favor with my condescension. I even considered my non-involvement in Feminism as some kind of benevolent acquiescence to women. “You go girls!” I thought in self-satisfaction, “Tell those nasty men off!” Never thinking that I might be one of these “nasty men,” or even that my non-involvement was more evidence that I marginalized women and their silly feelings. It’s both a comforting and terrifying thing to learn that I can have profound realizations about myself this late in life. It’s nice to know I can still learn and grow, but about what else am I kidding myself?

I find I am the subject of a lifetime of conditioning, despite my Ms. Magazine mom. I find that my lifetime is but a sliver of societal conditioning stretching back to the dawn of humanity. We all come to accept some things as simply true: sex sells. Women work hard to look pretty and should be regarded for it. If a woman wears certain clothing, she wants you to gawk. These aren’t concepts I arrived to through careful consideration but by observing the world around me and being trained by the same concepts that train everyone else.

We are all in this together, men and women. All of us educated from womb to tomb that boys like farts and girls like flowers, and never the twain shall meet. And, if you don’t get my point by now, that’s absolute bullshit.

How will I proceed? Well, for one thing, I’m going to cut the crap. I can silently appreciate a blouse and roundly chastise my friends for misogynistic comments. I can attempt to regard women on their merits and not based on some condescending notion about their superiority.

The problem isn’t that women aren’t running the world, it’s that women by and large aren’t running anything. That even well-respected women in positions of power can be called “emotional” for speaking their minds. And I might have counted myself among those who waved off women’s problems as “Woman Problems.” The one thing I know for sure is that women aren’t going to become equal by screaming into a vacuum that no man can hear. It will be up to us menfolk of the world to change our perception of women and how we treat them if we’re going to see true gender equality.

If you believe in fairness and respecting others as you would want to be respected, then I don’t see how you could do any less.