Ok, this was REALLY pushing it.

I’ve seen people wanting to transform their bodies to reflect personal change and to self-evolve. Some people get a tattoo or two, some people spend time exercising in the gym, and others shed their identities to adopt new ones. Of course, it’s not limited to these three examples nor are they mutually exclusive. But with the latter example, several people have gone too far with it.

One-time Ph.D. candidate Erik Sprague voluntarily and eagerly underwent several surgical modifications (extensive tattooing, forking his tongue, dental work, et. al) to become a real-life Lizard-Man. The guy who turned himself into a human cat is the same thing, plus he also eats raw meat. But this most recent addition makes me want to shake my head as though I had swimmer’s ear.

I’m an über-fan too, but I’d never take it THIS far: 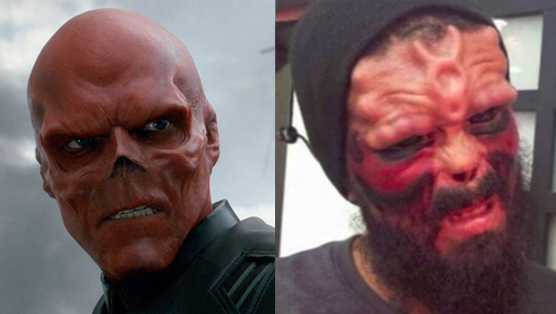 A 37-year-old man named Henry Damon, of Venezuela, has transformed himself into a real life Red Skull as portrayed by Hugo Weaving in 2011’s Captain America; The First Avenger. So much so, that he actually will respond to nothing except for “Red Skull”.

With the help of a friend who’s a former medical student, Damon had his face tattooed red and black, implants placed into his forehead, and part of his nose removed.

But, here’s my problem with this: This man who’s both a father and husband made himself unemployable (with the possible exception of carnival sideshows); most likely traumatized his kid(s); and possibly convinced his wife that she’s technically committing an act of bestiality every time they make love from here on, if ever at all anymore. And for what? To transform himself into a comic book villain who’s also a Third Reich Nazi war criminal.

Yeah, a Hispanic man turned himself into a character who would have him and all of his people killed en masse if he existed in real life. With this story out, I’m surprised no one’s yelled out “RACE TRAITOR!” yet. If he begins to take “Johann Schmidt” (the Red Skull’s real name) as an alias, then people can exercise the right to beat some sense into him.