Action-adventure movies are here to stay. Deal with it.

Recently, in direct response to Birdman scoring Best Picture Oscar, Action A Go Go’s Editor-in-Chief Derek Scarzella wrote a piece about how the film business loves to hate the superhero film. In particular, how Birdman uses its soapbox to air Hollywood’s ongoing grievances with the industry’s current dominant genre.

It’s such an obvious, simple message. The movie, waiving it’s hands frantically, clearly states “Hey, superhero films are not art! The theater is art!” And in this day and age, as a lover of movies and comics and everything in between, I am left so bitterly disappointed.

Where do these “super heroes” fit in the grand scheme of things according to Birdman? Oh, it is just a necessary money-generating evil that normal people can fawn over while we, the”theatre people” a.k.a “true artists” play dress up, smoke cigarettes and pretend to be better than everyone else.

I might be extrapolating a bit in that last bit, but you get the point. After taking our hard-earned geek dollars, Hollywood is collectively thumbing their nose at their largest audience with this Oscar win, and it has me biting my knuckles.

Scarzella isn’t alone in this. Recently, director James Gunn (Guardians of the Galaxy) went to Facebook to express his own annoyance at the industry’s dismissive attitude with not just superhero films but “genre” films overall. The director, known as much for his work in b-movies as he is for this summer’s biggest hit, took to his personal profile to point out a hypocritical pattern coming not just from the Academy Awards but also the Independent Spirit Awards. 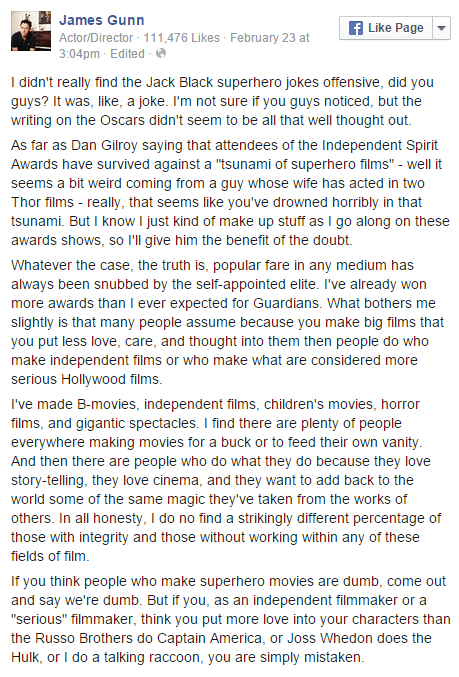 What both Scarzella and Gunn are probably very aware of but fail to mention is that Hollywood is indebted to the very genres that they have long looked down on. Sci-fi, crime, horror, action, adventure…these genres have consistently kept the movie business afloat whether it be during the rise of the blockbuster or difficult financial times for the industry. One only needs to go a few years back to remember the film world’s hair-on-fire reaction to the gaming industry siphoning theater-goers. It’s no coincidence that those concerns started to subside right around the time that Marvel Studios started producing independently and Christopher Nolan’s Batman series began to garner critical acclaim and box office dollars.

Even further, it is because of pioneers pushing the boundaries of film technology through “genre” that movies still capture our imagination today. And I’m not just talking about James Cameron or George Lucas (although they have certainly done more than their part), but the likes of Thomas Edison and Georges Méliès. I’m referring to superstar stuntmen like Buster Keaton and fantasy storytellers like Walt Disney. I’m talking about the people who wanted to thrill us with their art, not just make art for art’s sake.

Which brings me to Spy Smasher, the 1942 12-parter starring Kane Richmond. Like most serials of the time, the lines between genres mean little to Spy Smasher. This movie happily criss-crosses categories, from espionage to superhero. It also has Nazis, a mistaken-identity plot, and a hand-wringing evil-doer trying to bring about economic collapse.

Based on the Fawcett Comics pulp hero of the same name, this wonderfully goofy, bare knuckle, piece of war propaganda is still considered one of the greatest movie serials ever made. More importantly however, it is  a reminder of how long the “action film” has been around, how little the genre has changed, and how the audience’s demand for “thrills, chills, and spills” will never go away. Despite how much the critics wish it would.