WHY DOES HOLLYWOOD ALWAYS TURN BATMAN INTO A KILLER?

Mr. Sunday Movies has done the unthinkable and documented every Batman kill put on screen (below).What makes this so unexpected? Well, since the first Christopher Nolan film, longtime fans and recent converts of the church of Batman have been at odds over whether or not the caped crusader kills. In the current comics (which the character originated from and can be found most frequently), Batman is reluctant to take a life or use a gun. This is largely due to the fact that Bruce Wayne’s parents were murdered. However, as you’ll see in the video below, Hollywood’s version of Batman has been much more liberal with the body counts. 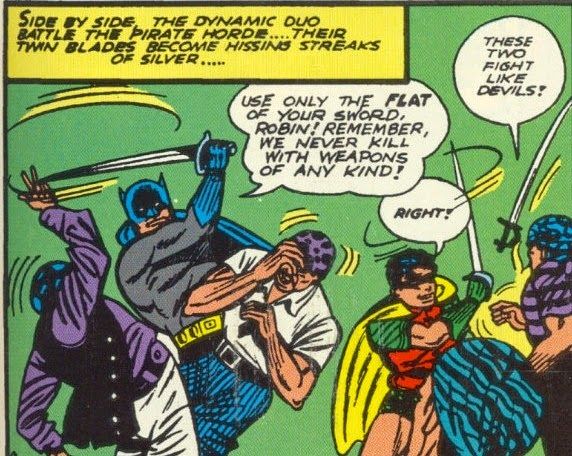 While I am aware of the fact that Bats has in fact killed at certain points of Golden Age days, for the bulk of the character’s existence he has made it a point not to. As a matter of fact, you can track the moment Batman became tame and stopped killing people by looking at the character’s first appearance (1939’s Detective Comics #27) to the start of the Comics Code Authority. Started in 1954 as a direct response to psychologist Frederic Wertham’s war on the comics industry, the sole purpose of the CCA was to trim the sex and violence from comics. For those of you counting, that’s about 15 years of published comics before Batman went from killing with abandon to being “kid-friendly.” However, if you really want to get technical, Batman came into being the no guns/no killing character we associate him with about one years after he first appeared. By Batman #4 in 1940 (pictured above), the caped crusader makes it a point to tell Robin that they don’t kill. 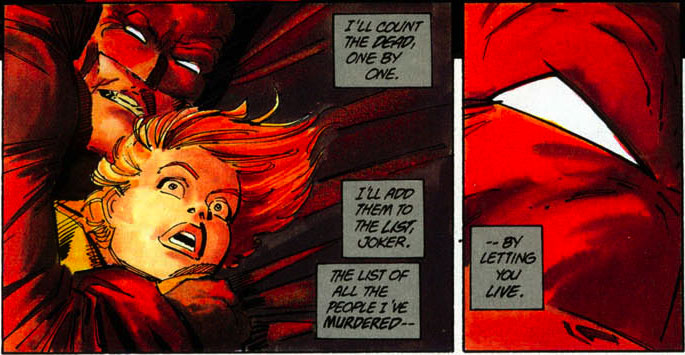 That’s not to say that his hand has never been forced (Example: The deliberately vague ending to The Killing Joke), but that his “no kill” policy has been the rule. As much as the Internet likes to pluck out random panels from the character’s brief homicidal history, when The Dark Knight does kill…it is the exception.

Animated movies aside, screenwriters have never quite gotten Batman right. If anything, Bruce Wayne’s ethics have been consistently relegated to an afterthought so that his amoral villains can shine. While Christopher Nolan did a stellar job highlighting Batman as a symbol, The Dark Knight Trilogy director — along with Tim Burton (1989’s Batman, Batman Returns) and Joel Schumacher (Batman Forever, Batman & Robin) — are all guilty of glossing over the long-standing principles of the character. This doesn’t make Burton, Nolan, or even Schumacher bad storytellers or poor directors (far from it). It does however say a little something about Hollywood’s obsession with “modernizing” aspects of a character that may or may not need to be modernized in the first place. For almost 76 years Batman hasn’t killed. So why would it be such a stretch for movie audiences to appreciate Batman without the homicidal tendencies?