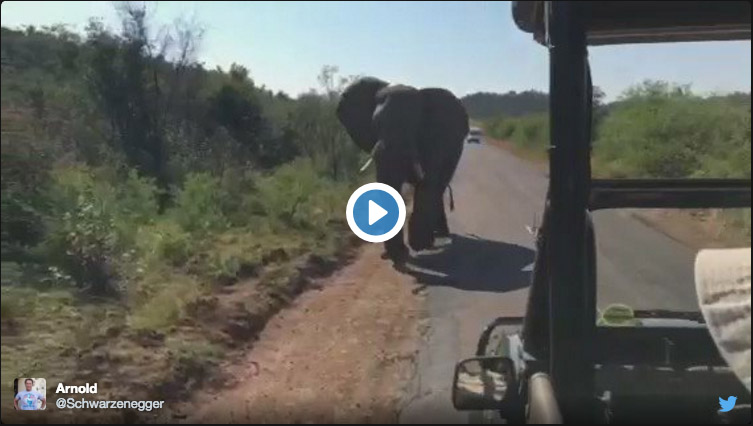 I’m absolutely in awe of these beautiful animals, and I wish people would stop killing them for their ivory. pic.twitter.com/FYtO94aXU6

“Conan! What is best in life?”

“To crush your enemies…”

Arnold Schwarzenegger, former Mr. Olympia and one of the greatest action heroes of all time, came close to regretting the first part of Conan’s infamous proverb as his vehicle was nearly stampeded by a massive elephant on Tuesday.

The Terminator, who has been sharing his Safari to South Africa with his twitter followers, posted the above video with this message:

I couldn’t have written this encounter better if it was for a movie. Some of us had to change our pants. Take a photo, not a shot.

Arnold’s admiration and respect for nature is admirable, but the story may have been different if the Safari guide hadn’t scrambled to drive away quickly in a getaway that resembles the T-Rex chasing the jeep in Jurassic Park.

An elephant of that size could easily squash a car and its inhabitants with its weight alone (if only Sarah Connor had had one for a pet in the first Terminator). According to a post on People Magazine’s website, you can hear Schwarzenegger “cooly” commenting to the other alarmed passengers, “… he’s going to charge us.”

Listen closely and let me know in the comments if you hear him say it. All I heard toward the end was, ” Oh S***!”

There is a full version of the video Schwarzenegger shot where he does very clearly and calmly tell his fellow passengers they are about to be charged. Whether or not he also added a, “Come with me if you want to live” is still debatable.