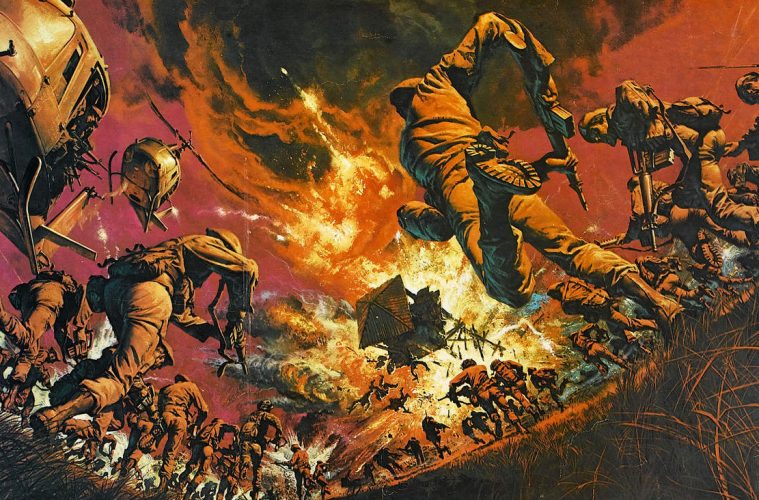 THE GREEN BERETS: JOHN WAYNE’S WAR ON THE VIETCONG AND AMERICAN PUBLIC OPINION

By the middle of the 1960s Vietnam had become the hot point of the Cold War. As America’s military presence in the country escalated, so too did public opposition to the conflict.

College students protested on campus, writers and musicians like Bob Dylan created works with an anti-war message, and prominent public figures like Martin Luther King and Muhammed Ali all took stands against the conflict.

But not everyone agreed that the Vietnam War was wrong. So after visiting troops involved in the fighting, America’s most famous red-hating patriot John Wayne decided to make a film to show his country exactly why they were fighting in South East Asia.

It’s entirely possible that ‘Duke’ (or Marion, as he didn’t like to be known) set out to make a realistic nuanced account of America’s most divisive conflict, rather than a terrible piece of clunking propaganda. But hey, guess which we got?

Still, regardless of the film many faults, it remains a fascinating historical document. The Green Berets was one of the few contemporary movies made about the Vietnam War. And while history may not have been kind to its political message, Wayne’s movie was one of the highest grossing pictures of the year – proof that it must have chimed with public opinion.

The Green Berets is the subject of the latest Exploding Helicopter podcast so if you want to find out more about the film then take a listen to the show on iTunes, Podomatic, YourListen, Stitcher of right here.