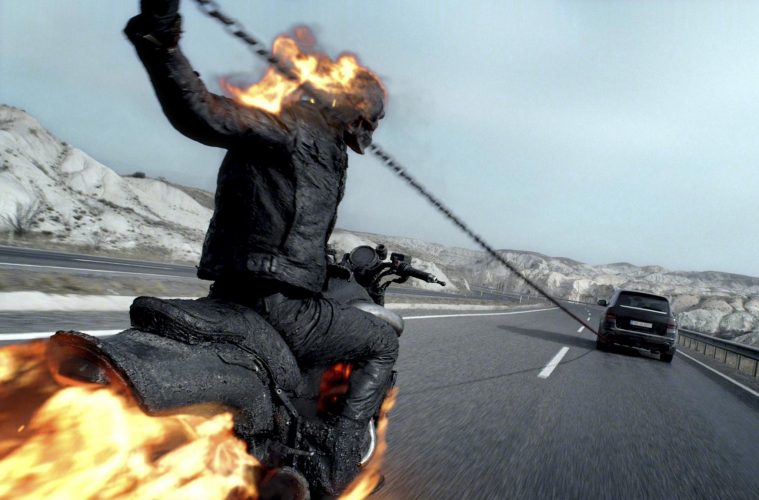 Ghost Rider may be the new hotness thanks to Agents of S.H.I.E.L.D., but there was a time when the character was (appropriately enough) considered the kiss of death in Hollywood. Plenty has already been said about 2007’s Ghost Rider, the Nicholas Cage passion project that, despite opening strong at the box office, was quickly shit-canned by audiences and critics alike. But what about Cage’s second cinematic go-round, 2012’s Ghost Rider: Spirit of Vengeance?

Spirit of Vengeance is the product of Hollywood being totally unprepared for the growing success of Marvel Studios. After the comic book company-turned-movie house had rescued several of their key players from development hell, they subsequently spun their tumultuous relationship with the film industry into “The  Marvel Cinematic Universe” that we know today. This ultimately sent studios like 20th Century Fox and Columbia Pictures scrambling to shore up any movie rights involving Marvel characters that they had at the time. The result: A kind of…sort of…not really sequel to 2007’s Ghost Rider.

Directed by Mark Neveldine and Brian Taylor (Crank) and written by David Goyer (The Dark Knight Trilogy), Spirit of Vengeance saw Nicholas Cage step back into the leather boots of Johnny Blaze. This time, however, the actor is fully committed to depicting Blaze as less of an anti-hero and more of a man driven mad by the soul-crunching specter that lives inside him. Eschewing his quirky, jelly bean eating performance from the first film, Cage’s reluctance to be the hero is actually pretty entertaining in the sequel. Especially when Blaze and the Ghost Rider are visibly at odds with each other over sparing lives.

Which brings me to one of the reasons I actually enjoy this film: Neveldine and Taylor. The directing duo embraces the madness that is Ghost Rider. This version of the character is so unpredictable that I found myself actually rooting for Johnny Blaze to keep the spirit at bay at certain points. Specifically when the plot demands that Ghost Rider has to “purify” a child in the name of vengeance.

Previous to making this movie, Neveldine and Taylor got their names by directing the frantically paced, totally unhinged Crank series. There is some sort of accidental genius in pulling these two in to helm a Ghost Rider sequel starring Nicholas Cage and his unique brand of mania. Between the actor and his directors, there is so much happening in this ludicrous experiment that it easily ranks above its predecessor and becomes a bit of a riot.