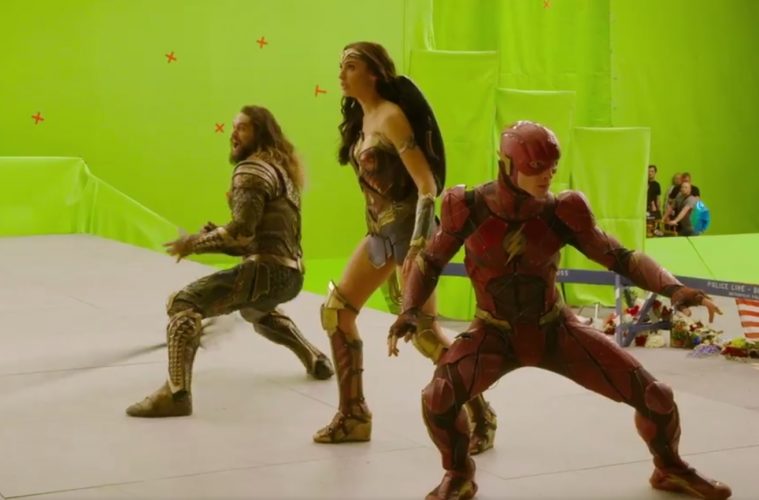 FOOL ME ONCE, ZACK SNYDER…

Filming for Justice League, Zack Snyder’s follow-up to his superhero grudge match, has just wrapped. How do we know this? Was is it leaked wrap party footage? A set-spy who filmed the director shouting “that’s a wrap”? Of course not! As is seemingly the tradition for this (oddly) very public production, a short video (below) was released announcing the films wrap and showcasing a minute and a half of behind-the-scenes videos. There’s nothing too astonishing here (a good deal of dialogue was also heard in the teaser trailer) but we do get glimpses of the characters moving in costume. There’s even a shot of Henry Cavill on set which has become somehow “newsworthy” even though he’s wearing the exact same costume that he wears in the promotional pictures that were released months ago. I mean, is that really that big of a shock?

To me, the most interesting bit of this video is the stark contrast in how the sets look while filmed and then how they appear in the movie. More than once, we see scenes being filmed and all the color is washed out for the presentation. It seems odd to spend all that money to make colorful sets and costumes just to fade it all out in post-production. However, this is nothing new when it comes to Zack Snyder productions.

Needless to say, this video does little to make me rethink my earlier theory of Warner Bros. being scared to death of this movie’s performance. As I mentioned before, they seem exceedingly nervous of its performance following their last film receiving a critical drubbing and accusations of being utterly cheerless. As such, this video showcases smiling crew members and nearly every shot of the cast has them doing something silly or laughing hysterically. While it seems desperate and a little sad at the moment, I suppose we shall see how it all shakes out in November of 2017. Until then (or the sure-to-be-released video celebrating the completion of post-production), enjoy this early look at Justice League.

Last day filming in the UK. It has been an amazing shoot. Big thanks to everyone involved! #JusticeLeague pic.twitter.com/TEjEdlo81u