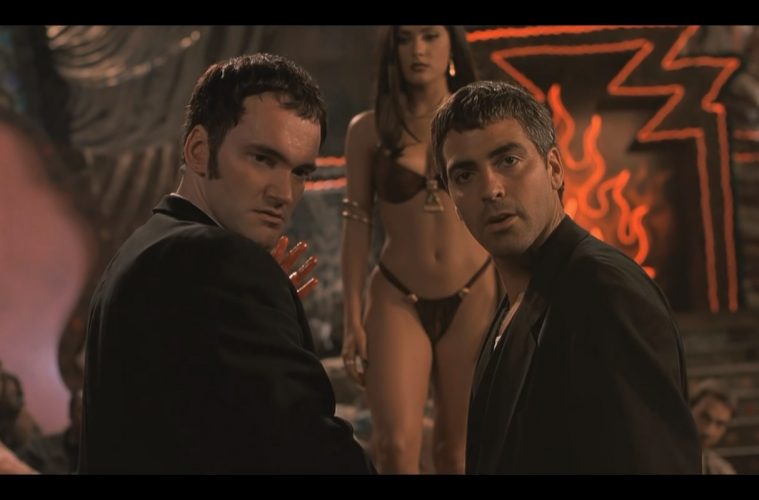 From Dusk Till Dawn, the genre-busting cult classic that launched an epic filmmaking partnership spanning two decades, will return to movie theaters to celebrate its 20th anniversary. Fans won’t want to miss this once-in-a-cinematic-lifetime event commencing with a brand-new, exclusive Q&A with director Robert Rodriguez and writer Quentin Tarantino.

Presented by Fathom Events and Miramax, the 20th anniversary celebration of From Dusk Till Dawn is the only place fans can see a brand-new, exclusive Q&A with Rodriguez and Tarantino discussing the blockbuster hit. The conversation is moderated by renowned film critic and host of The Treatment, Elvis Mitchell.

Tickets for “From Dusk Till Dawn 20th Anniversary” are available online at www.FathomEvents.com or at participating theater box offices. Fans throughout the U.S. will be able to enjoy the event in select movie theaters through Fathom’s Digital Broadcast Network. For a complete list of theater locations visit the Fathom Events website (theaters and participants subject to change).

From Dusk Till Dawn thrilled moviegoers on its initial release in 1996, stunned audiences with Salma Hayek’s now iconic snake dance scene, and launched the film career of George Clooney. It’s since gained a rabid cult following and spawned two film sequels as well as “From Dusk Till Dawn: The Series,” now in its third season on El Rey Network (www.elreynetwork.com), a 24-hour English-language network founded by Robert Rodriguez.

“From Dusk Till Dawn is unpredictable, creative and breathtakingly original, a movie that almost defies description,” Fathom Events Vice President of Studio Relations Tom Lucas said. “Fathom is excited to help bring this collaboration of Robert Rodriguez and Quentin Tarantino, two of the unique voices in modern American cinema, back to the big screen for four special showings to commemorate its 20th anniversary.”
It’s nonstop thrills when George Clooney and Quentin Tarantino star as the Gecko brothers – two dangerous outlaws on a wild crime spree. After kidnapping a father (Harvey Keitel) and his two kids (including Juliette Lewis), the Geckos head south to a seedy Mexican bar to hide out in safety. But when they face the bar’s truly notorious clientele, they’re forced to team up with their hostages in order to make it out alive. From Robert Rodriguez and Quentin Tarantino, the creators of Grindhouse, From Dusk Till Dawn is explosive action entertainment.