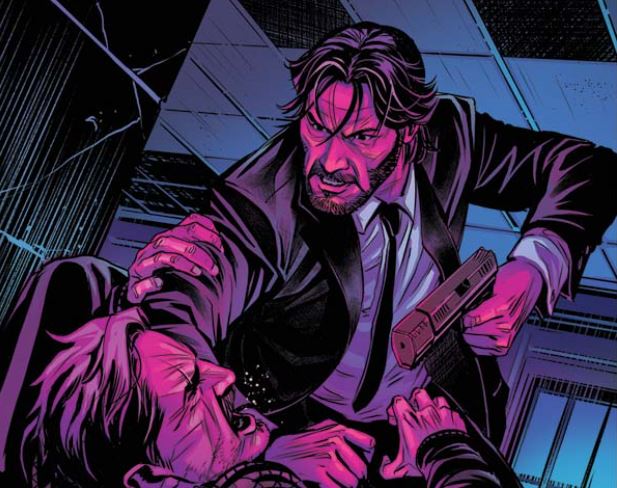 SOMETHING WICK-ED COMES TO COMIC BOOKS

I will mention that this series is from the man who gave us PLANET HULK and WORLD WAR HULK. 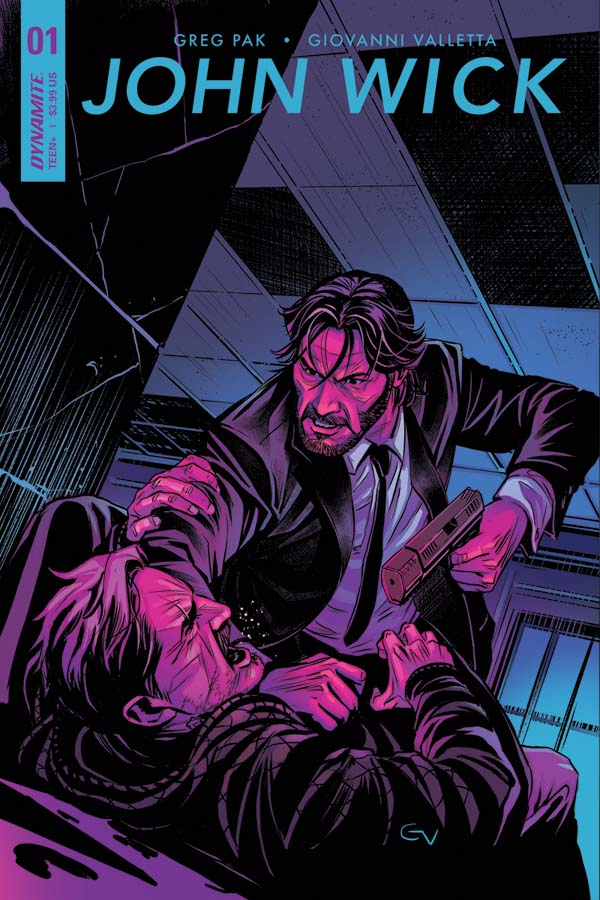 Award-winning writer Greg Pak (Planet Hulk, Code Monkey Save World), and artist Giovanni Valletta (Dark Horse Presents) have been tapped as the creative team to bring the world of the hit-film franchise John Wick to the pages of comics, thanks to a new partnership between Dynamite Entertainment and Lionsgate Films. Slated to launch on September 6th, the new series will offer fans of the massively popular character the opportunity to discover his thrilling origin story for the very first time!

When a young John Wick emerges from prison and embarks upon his first epic vendetta, he comes up against a strange, powerful community of assassins and must learn how to master the Book of Rules that guides their lethal business. What are the Three Bills? Who is Calamity? And who was John Wick before he became the Baba Yaga? 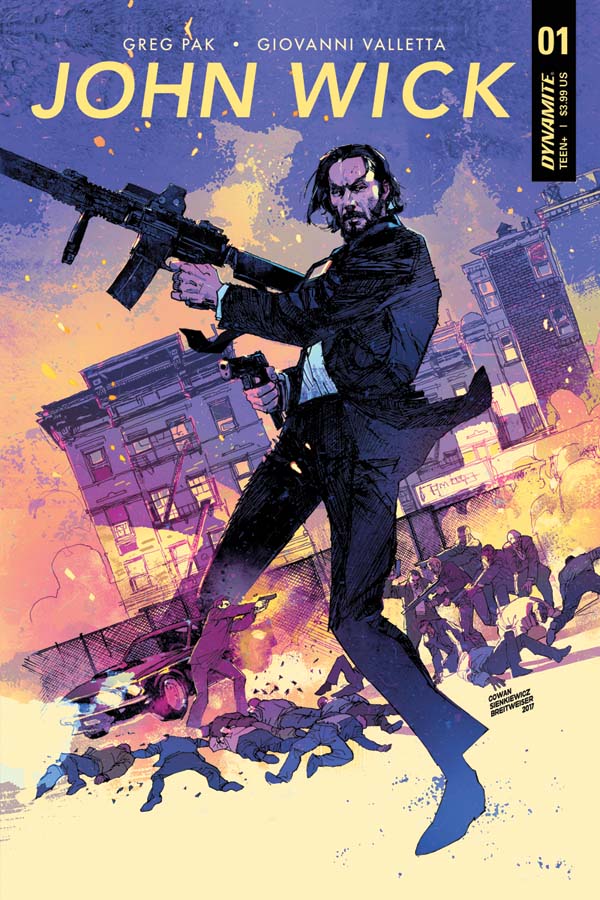 Writer Greg Pak says, “I was on board pretty much as soon as I got the call and heard ‘John Wick.’ I’m a huge Keanu Reeves fan and loved the John Wick movies, which had the kind of kinetic action and intriguing mythology that seemed like a perfect fit for comics. I’m also always happy to work with my friends at Dynamite, who are always a pleasure to make comics with. And the art I saw from Giovanni Valletta blew my mind — he’s totally nailing Keanu Reeves’ likeness while creating emotional, dynamic, exciting action. This book is going be BEAUTIFUL. But what really sealed the deal was when Dynamite Editor Anthony Marques said we had the greenlight to tell a John Wick origin story. That was astounding to me — we’re not just telling another fun adventure with the character; we’re actually going to be able to add to this character’s and world’s tremendous mythology by telling an origin story! What could be cooler than that?”

Artist Giovanni Valletta says, “When Dynamite Editor Anthony Marques asked me if I would like to do some tryouts for this project, I immediately jumped at the opportunity. I loved the John Wick film so much, and have been a fan of Keanu Reeves and his work for as long as I can remember. I couldn’t be happier to have been picked to work on this project, and I hope the love I have for this movie shines through in my work.”

Giovanni Valletta was raised in Caracas, Venezuela and studied Illustration at the Caracas Institute of Design before continuing his studies with Jesus Pastore at the Art Center School of Design. Once Valletta decided to turn his career towards the comic book industry, he attend the Kubert School of Cartooning and Graphic Art, from which he graduated in 2010. Shortly after graduation, Valletta began working for Tell A Graphics alongside owner Joe Kubert, and became a member of the teaching staff at the Kubert School in 2012. His artwork has been featured by a number of top-tier publishers, and is best known for his work on Dark Horse Presents and Pathfinder: Worldscape. 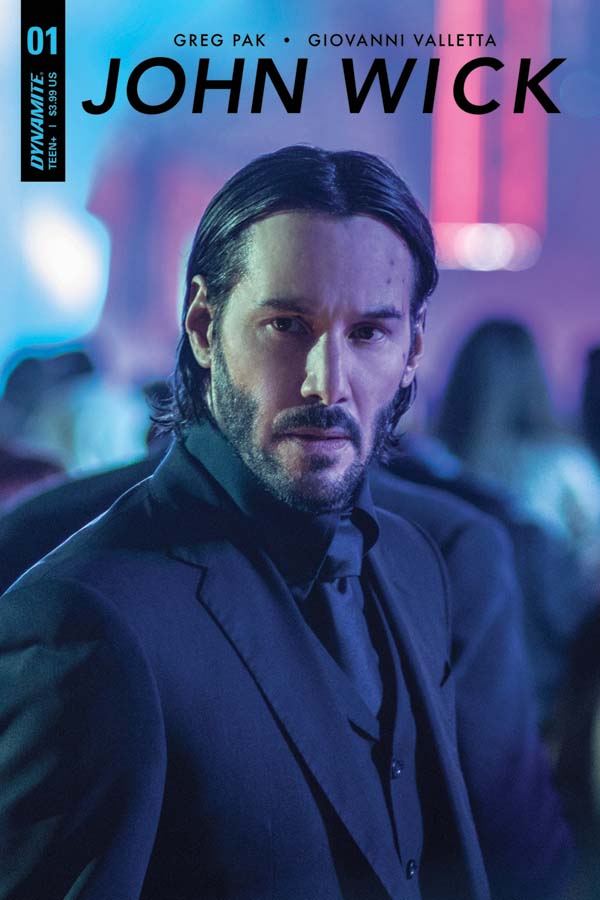 “John Wick is an incredible character – he and the world he inhabits are mysterious, thrilling, sexy, and contagious,” says Anthony Marques, Editor for Dynamite Entertainment. “The series that we are doing develops that world even further by delving into his official origin story for the first time. We couldn’t have been more fortunate than to have Greg Pak come on board to craft this tale. He has such a great understanding of the characters, their world, and their voices. The artwork Giovanni Valletta is creating is going to leave people breathless. He’s found a way to truly immerse the readers into the world of John Wick in a way that I don’t think any other artist would have been able to. The thrills, speed, and action are all there on the page!

Marques continued, “This whole process has been an amazing ride – almost as thrilling at the films! We’ve received the blessings from all of the creators involved with the films, every step of the way. That includes the writer/creator of John Wick Derek Kolstad, as well as Thunder Road, Lionsgate, and even Keanu Reeves. This book is the real deal and people are not going to be disappointed.”

“I have been a huge fan of the John Wick franchise since it was first released in 2014,” says Dynamite CEO and Publisher, Nick Barrucci. “When I broached the idea in our editorial meeting, it was unanimously agreed upon! The entire Dynamite team is thrilled to have the opportunity to work on such a great property, and we’re excited to work with the amazing team at Lionsgate Films to make this new hit comic book series happen!”

The action-adventure film franchise John Wick launched in 2014 and follows the titular hero, a deadly hitman, as he seeks vengeance for the death of a loved one. Directed by Chad Stahelski and David Leitch, and written by Derek Kolstad, the critically-acclaimed first installment starred Keanu Reeves and grossed close to $90 million worldwide. Based on the box office success of the first film, the series was greenlit for a sequel, and John Wick 2 opened in February 2017, grossing $165 million worldwide to date. The new partnership between Dynamite Entertainment and Lionsgate Films marks the first time the series will be published in comic book form.