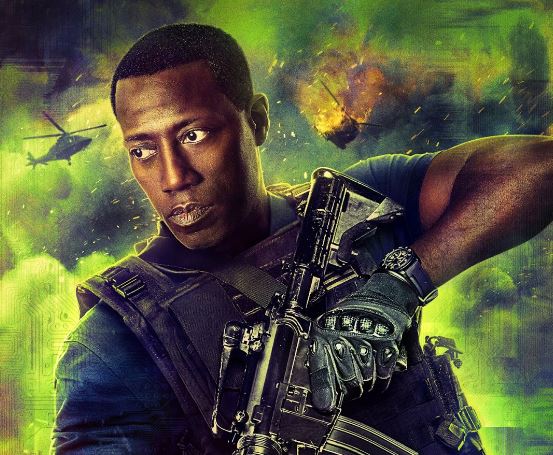 WESLEY SNIPES AND SETH ROLLINS VS. THE MACHINES IN ‘ARMED RESPONSE’

Really random trivia about this film: It’s directed by actor/director John Stockwell AKA “Cougar” from TOP GUN and the man who gave us the Michelle Rodriguez surfer movie BLUE CRUSH.

That may or may not move you to check this one out, but Stockwell is a pretty seasoned craftsman when it comes to directing (personally, I thought BLUE CRUSH was really well done). So this might have all the polish it needs to support it’s intriguing premise.

A team of special forces soldiers approach the designer of a high-tech military compound to investigate the disappearance of another team guarding the facility. The compound, known professionally as a Temple, is an artificial intelligence powered facility designed for interrogating high level prisoners. Upon entering the Temple, the soldiers quickly find the earlier team horrifically slaughtered but no evidence as to who is responsible.

Almost immediately, the crew begins to experience strange and horrific supernatural phenomena as they attempt to uncover who killed the previous team. Soon enough, they find a lone survivor, a dangerous terrorist who may hold the key to who killed the soldiers. But as the story goes on, we’ll learn that there’s more to it than we’ve been told and a dark secret the soldiers share may hold the key to surviving The Temple.

This might be a fun ride featuring Wesley Snipes and WWE Superstar Seth Rollins (WWE also produced this one). Check it out when it comes to select theaters and Video On Deman August 4th.