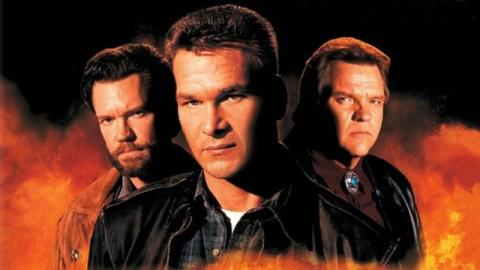 Patrick Swayze was such a great movie star. Handsome, funny, cool, tough and diverse. He was everything Hollywood looked for in a leading man. And his diversity saw him star in many iconic classics, such as ‘Ghost’, ‘Dirty Dancing’ and the magnificent ‘Road House’. He even had a great role in the cult classic ‘Donnie Darko’. He did so much in his life. But for me, there’s a movie that I love even more than the mighty ‘Road House’… 1998‘s epic ‘Black Dog’.

Patrick Swayze stars as Jack Crews, a trucker with a tragic past, who is desperate for a big payday when he and his family face losing their home. Offered a job by his boss, Cutler (Graham Beckel), to drive toilets from Atlanta to New Jersey, Jack soon discovers that his cargo is far deadlier than he agreed to transport. A cache of guns to be sold on the black market. When Crews is pursued by the police, he is told if he is caught or refuses to carry on to his destination, his wife and child will be murdered. What follows is a spectacular race against time, as Jack drives for his family’s lives and is determined to evade the law, and the thieves who are trying to boost his load, including the iconic Meat Loaf as Red.

I love road movies. You can’t beat a full-on chase movie. And they don’t come much better than ‘Black Dog’. Patrick Swayze is in fine form as the movie’s hero, portraying a convincing action hero yet again. Most prefer his romantic work, but Swayze the action man is the definitive Swayze. The movie’s villain, Red, is over-the-top fun, thanks to legendary rock star Meat Loaf bringing his larger than life personality to every scene he’s in. He’s both funny and terrifying at once. Cutler (Graham Beckel) the movie’s other villain, is less fun but gets the job done. Randy Travis is also decent as Earl, the ride-along passenger who helps Jack save the day. Everyone here is enjoying the crazy antics of the movie, which always makes action movies better. If the cast enjoys it, we enjoy it.

But nobody’s coming to ‘Black Dog’ for the acting. We’re here for the action. And oh boy is it glorious. While not the most relentless chase movie you’ll see (Check out 2013‘s divine ‘Getaway’ for that accolade), the truck chases here are blazing fun. Brilliantly shot, edited perfectly and with Swayze always on great form, the chases thrill to almost over boiling. With action movie director Kevin Hooks onboard, the director of the classic ‘Passenger 57’ and the awesome ‘Fled’ (Also a director on TV’s ‘Prison Break’), we shouldn’t expect anything less than brilliant when it comes to the action scenes. The finale is especially wonderful, with engines roaring and wheels burning, as we race toward the movie’s end. You rarely see truck chases in movies, due to the level of danger involved in creating them. But with ‘Black Dog’, you’ll get all the gorgeous truck action you’ll ever need. Both this and William Friedkin’s magnificent 1970‘s blockbuster ‘Sorcerer’ surely must be the best trucker movies out there.

Many critics will tell you ‘Black Dog’ is a bad movie and not worth your time. I tell you they’re wrong. This forgotten gem is a must-see for any action movie fan. Patrick Swayze was a truly great man. We’ll rarely see that skill and diversity again. On a final note, the term Black Dog refers to hallucinations suffered by truckers who spend too long on the roads. That plays a major part in the movie, hence it being titled as such. Check out this movie now.