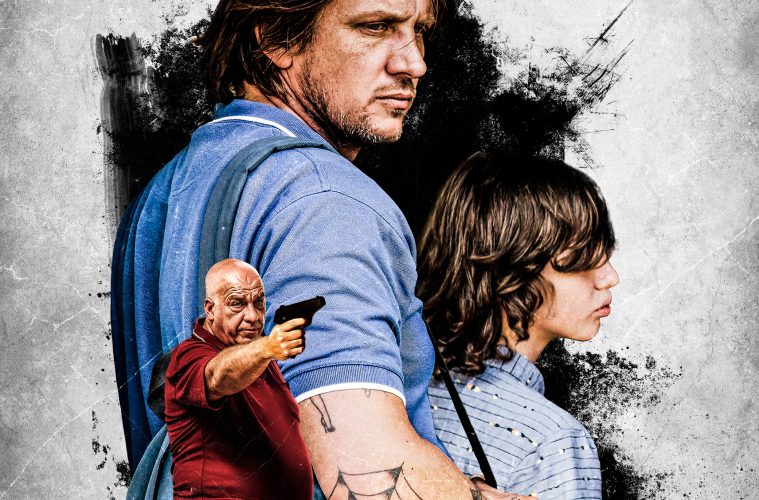 West of Sunshine (dir. Jason Raftopoulis) is a small film in the best way possible, with a heavy focus on familial relationships and the trauma that fathers can pass on to their sons, simply by being who they are. The poster and trailer may lure you in with the promise of a violent romp. And while yes, violence, crime, gambling, and drugs figure into the plot they take a back seat to the portrayal of the rocky relationship between Jim, (the late Damian Hill) and his young son Alex (Ty Perham, in his first acting role and who is Hill’s real-life stepson); The two having become estranged due to Jim’s gambling addiction. Over the course of a day they bond and bicker while racing against the clock to settle Jim’s latest gambling debt, one with potentially dire consequences for them both.

The film opens with Jim and his good friend Steve (Arthur Angel) driving to their courier service job in Jim’s pristine vintage muscle car, the only thing Jim’s father left to him before disappearing from his life. Banos (Tony Nikolakopoulos), an old boss with criminal ties is after Jim to the tune of 15,000 dollars and the debt comes due by the end of the day with harsh repercussions to be suffered by Jim if he cannot pay it. Amidst this pressure, Jim has forgotten that he is to be responsible for Alex’s care that day. After unsuccessfully trying to pawn babysitting duties off on his girlfriend Jenny (Eliza D’Souza), Jim reluctantly takes Alex along on his delivery route. Because of Alex’s presence, Jim is disallowed from using the company vehicle and must use his own car. This is much to his chagrin as the film makes abundantly clear at this point that the car is one of the, if not the most important thing in Jim’s life.

Jim has instincts about a horse race that is going to net him what he owes and then some and sets out to make his deliveries while biding time until he can play the ponies. During this montage of deliveries around Melbourne the shells that Jim and Alex have constructed to protect themselves from each other begin to crack just a little bit. Alex, at first angry and distant, warms to the varied people and environments he is exposed to while traveling around the city with his father. Jim, through his son, begins to see the world with fresh eyes, even as that sword of Damocles swings to and fro above his head. There are moments of tension still but they are interspersed with commiserations over life, women and games. By the time the two make it to the bar where Jim is going to place his next bet they have grown close enough for Jim to introduce his son to the game of Blackjack and his own take on gambling, the highs and the lows. While on the face of it, a scene that depicts a gambling-addicted father teaching a child the finer points of a casino card game might seem off-putting, this is the kind of event that West of Sunshine puts forth as family bonding. Indeed, it is one of the first times we see Jim truly open up to his boy and share one of his true passions. The game is cut short as Steve arrives to bet alongside Jim, and the horse race begins.

Over the next few scenes, the film then visualizes the philosophies on gambling that Jim has just expounded on. Jim is positive about this next race, more so than he has ever been of anything in his life, convincing Steve to bet as much he can. (Interesting is Steve’s justification of his bet amount, “This is all I can afford to lose…” – a much different take than Jim’s to be sure.) The bets are made and the race begins. The men watch with bated breath. The horses round the track and the one that Jim has pegged to win is doing fine. Anticipation grows as the race nears its conclusion. Jim’s horse pulls into the lead. Jim and Steve grow ecstatic. Jim reaches over to Alex and pulls him close. Jim’s horse finishes first. The three jump up and down basking in the glow of the win. Jim hugs his son tightly.

And just like that Jim has made everything he needs to absolve him of his debt and more, so much more than he immediately calls his debtor and sends him a picture of his winnings, promising a visit within the next few hours. Jim treats his son to a large lunch at the betting bar and he begins to hold court over his fellows, regaling them with good memories and tales of big winnings. Of course, at this point in the story, the astute viewer will note that there is plenty of runtime left in the film, and West of Sunshine has yet to visualize the other half of the gambling equation: the crushing lows.

Jim has another surefire horse bet on his mind and thus, as easily and as unbelievable as it comes, the money goes. This sets Jim back to square one and puts him in an even fouler mood and his relationship with his son regresses accordingly. Now even more desperate to set things right, and with the payment deadline closing in, Jim sets upon a begging tour around Melbourne, darkening doors and making impassioned pleas for money. This leads him to the home of his old girlfriend, Mel (Kat Stewart) who is in the drug trade. She proposes that he earn the money through more courier work, but this time it’s little packets of white powder.

In truly dire straits, Jim takes the work and makes the deliveries with his son in tow and we are treated to a twisted mirror of the delivery montage from earlier in the film. Jim and Alex continue to make poignant discoveries about their world and each other, now tinged with the bleakness of drug addiction. Jim and Alex’s lives and the fate of their strained relationship will ultimately depend on Jim’s ability to rectify his mistakes and Alex’s ability to trust and bond with his deadbeat father.

It’s easy to look at a gambler who has lost everything and exclaim ‘Shame on you, you should have known better. You deserve everything you get.’ But that would be failing to see gambling addiction as a disease and something that can be inherited. That is something that the film deftly touches on through its shading of Jim and his interactions with Alex.

DP Thom Neal’s use of handheld camera, close angles and muted coloring give Melbourne a dry, gritty feel and Raftopoulis’ subtle direction gives the characters a sense of relate-ability if not likability. Of course, the true stars are Hill and Perham as father and son. The plot could be accused of meandering but for their obvious and complex character growth throughout the course of the film. It is a joy to watch these two play off of each other as they have a clear closeness and chemistry, likely owing to the real-life familial bond that they shared.

West of Sunshine is a collection of moving scenes between the two but a couple stand out for me. The first is the aforementioned Blackjack scene. The second is a scene towards the end of the film where the two cut each others’ hair. Alex’s hair length is offhandedly mentioned by his mother as a point of argument and seemingly apropos of nothing Jim grabs a pair of scissors from his boss’s desk, takes Alex to the beach and cuts his hair. Alex asks if he can cut his dad’s hair, and Jim acquiesces. It is then, with a head of poorly cut hair, that Jim goes to face Banos one final time.

It’s a scene that I think depicts the shedding of Jim’s stress and anger and a new start for his relationship with Alex. But the film does not make that clear. The film is purposely hazy on several details in fact. For example: What is Jim’s relationship to Alex’s mother? How old is Alex? Exactly how much money DOES Jim lose at the bar? What understanding do Jim and Alex come to by the end of the film? These questions aren’t really answered but ultimately they aren’t the point. The characters in West of Sunshine DO know the answers to these questions and will move forward with their lives. The film allows its audience an engaging peek into a dysfunctional family’s life on a very important day, a day that a father must confront his tragic shortcomings and a son learns what his dad is made of. It is a day in the life that I would whole-heartedly recommend that you experience yourself. 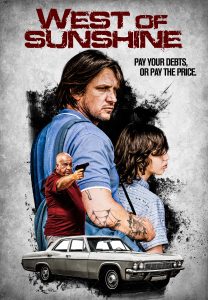 WEST OF SUNSHINE is currently available on VOD services.