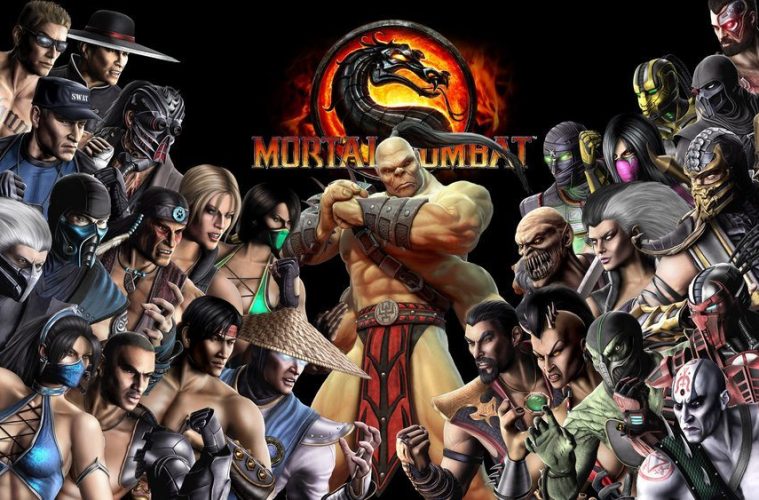 Welcome to the tenth and final volume of 10-Hit Combo; the series for ActionAGoGo which takes a look at ten facts about some of the most iconic fighting video game series’ of all time. Before I get into the topic of this month’s addition to the series, I would like to announce that as of next month, I will be writing a new series for ActionAGoGo entitled 10mm: a series looking at ten facts about ten of the most iconic first-person shooters of all time. The majority of games to be implemented have already been selected and work will begin on it immediately with the first article coming out in May. That being said, Mortal Kombat is the subject of this month’s article; it a fighting game series that has garnered critical and commercial acclaim for almost 30 years and has developed a particularly strong fanbase within that time. Besides which, the series has been known for causing overwhelming controversy and even morale outcry since its inception. But in turn, the series has also inadvertently revolutionized the entire industry in terms of censorship policy, shaping organizations like the ESRB and PEGI into what they are today. With a staggeringly vast mythology for a fighting game, as well as an extremely memorable cast of characters, the franchise has become beloved by gamers everywhere, so without further ado, here are ten facts about Mortal Kombat.

The series was created for Midway primarily by two guys; Ed Boon, the project’s programmer, and John Tobias who conceived the game’s story and art style. The first game began as a ninja-themed title created by Tobias, but the initial idea was rejected by management at Midway. They then approached Boon and Tobias to create a game based on the film Universal Soldier starring Jean-Claude Van Damme, which led John Tobias to contemplate including a digitized version of the Belgian martial arts actor in the game. The duo also thought about making a game based on the film Bloodsport, but the licensing subsequently fell through. Midway then noticed the universal success of Street Fighter II and challenged both Boo and Tobias to create a fighting game, and the rest is history.

The naming of the original game came about after a long and difficult process of settling on it. According to Ed Boon, it took six months to come up with one that everyone in the office didn’t hate at the time. Suggested names were Fatality, Dragon Attack and Kumite, named after a section of karate training. In Boon’s office, somebody one day wrote the word combat on the drawing board, after which someone else wrote a K over the C. It was Pinball designer Steve Ritchie sitting in Boon’s office at the time who noticed this and suggested to Boon that he name the game Mortal Kombat, and according to Boon, it simply stuck.

The original game had three non-playable characters in the form of the two boss characters Shang Tsung and Goro, and in a secret character named Reptile. However, there was also a rumoured fourth character called Ermac; a red ninja sharing the same character sprite as Scorpion and Sub-Zero. The rumour stemmed from the game’s debug menu, which featured a stat called “ermacs” under the amount of reptile battles activated, which led to speculation that Ermac was the name of a secret character. These rumours were then seemingly verified when a gamer named Tony Casey submitted a story to Electronic Gaming Monthly about how he supposedly found Ermac in the original Mortal Kombat but lost to him. Along with the story, he also submitted a screenshot of this from the arcade machine he did this on. However, a look at the screenshot will only verify that the colour had simply been edited to make the character look red, as the flags in the background are also red, whereas in the game, they’re yellow, meaning that the character in the screenshot is not Ermac, but in fact Scorpion; the “Ermac Wins” graphic simply being faked onto it. However, similar to the Sheng Long speculation surrounding Street Fighter II, this rumour led to the creation of an additional character; a red ninja named Ermac sharing the same character sprite as every other ninja character in the game, but simply palette-swapped to red.

Probably the most well-known and celebrated easter egg in the series is when players pull of certain moves in the game, a man briefly appears in the corner of the screen and shouts “TOASTY!” to add an element of humour, which has in turn led to becoming one of the most well-known catchphrases in all of gaming. This man is named Dan Forden, who has been composing music tracks for the game ever since the original release. For the longest time, it was never revealed how this phrase came about, or why it’s even included in the games at all. That was until an interview that Dan Forden gave shortly after the release of Mortal Kombat 9. He revealed that the phrase came about when he and series creator Ed Boon would play the game Super High Impact together. When both teams would approach the line of scrimmage, Dan Forden would say to Ed Boon “I predict toast” or “you’re toast”, which overtime manifested into “TOASTY!” It was after which that another programmer at Midway suggested that Forden say these phrases in the game. Ed Boon liked the idea, and Forden simply went along with it.

Like in most of the features covered throughout Ten-Hit Combo, Mortal Kombat has a major character based on the legendary martial artist actor Bruce Lee. In this case, this would be Liu Kang; one of the original seven characters in the game. He is of Chinese origin, he keeps his chest bare throughout most of the series, wears kung fu attire including a headband, slippers, gauntlets and contact pants. His name is even somewhat reminiscent of Bruce Lee’s Mandarin name Li Xiao Long, which translates to Little Dragon. But the Bruce Lee is manifested in not just one character, but the entire concept of the Mortal Kombat storyline borrows many elements from that of Enter The Dragon; one of Bruce Lee’s most well-known films, if not “the” most. Liu Kang is also the second ever fight game character created within the industry to be based on Bruce Lee; the first of which being Kim Dragon from the game World Heroes.

A feature that has made Mortal Kombat stand out among most fighting game, indeed, as well as most other games in general, is the fatality mechanic. Fatalities can be performed by players on an opponent after their life meter has been depleted. The player is given a certain amount of time to input a combination of buttons within certain distances of the opponent, which will activate the fatality sequence if done correctly. The feature has yielded popularity and controversy over the years and throughout the series, they have become progressively more violent and creative. However, both co-creators Ed Boon and John Tobias have given two different accounts of how the features came to be included in the series, Ed Boon claimed the idea started from the desire to give players a free hit at the opponent when they were dizzied at the end of a fight, and that the idea eventually evolved into something a lot more nasty, becoming the fatalities that are included in the games today. Whereas John Tobias stated that it stemmed from the original idea of using fatalities as a finishing move for Shang Tsung, whereby he would pull out a sword and behead the opponent. Tobias claims to have later brainstormed the idea of giving the player the option to do similar things to opponents.

Mortal Kombat was ported to a variety of different consoles upon release; perhaps most notably the Super Nintendo and the Sega Genesis (or Mega Drive as it was known outside the US). In terms of violence, however, there were quite a few surprising difference between both ports. In the Super Nintendo version of the game, the violence is prevalent from the get-go, with blood and fatalities intact, despite the fact that Nintendo had quite a strict policy at the time on adult themes in video games such as violence. Whereas with the Sega Genesis version, a lot of the violence is actually censored out at first, with blood effects replaces with grey liquid; supposedly sweat. In order to see the violent content, a code has to be entered into the game. The code is ABACABB. This a homage to the band Genesis, whose eleventh studio album is named Abacabb released in 1981, coinciding with release of the game on the Sega Genesis. But this isn’t the only reference to popular music in Mortal Kombat, as the character Rain is a purple ninja and a prince of a distant realm within the story, alluding to the song Purple Rain by Prince.

As I alluded to at the start of this article, Mortal Kombat, as well as other violent games around the time such as Night Trap, in part led to the creation of the Electronic Software Rating Board (ESRB), and by proxy the likes of ELSPA and PEGI. It was created as a reaction to the resulting public outcry when it was realized that the games industry was not formally regulated in the way that the film industry is for example. To add to this, Connecticut senator Joe Lieberman took  a stand to violent video games, arguing their glorification of violence, which he argued could have led to the corruption and desensitization of America’s youth. The ESRB was created to address these issues and to protect the industry, and has ever since become a mainstay of it, with all major gaming retailers refusing to carry unrated games.

Ever since the ninth instalment, Mortal Kombat has become known for including iconic horror film characters into their rosters; the first of which being Freddy Krueger from Wes Craven’s Nightmare on Elm Street franchise. In an interview with Ed Boon for PlayStation.blog, he explained the reasons for including Freddy Krueger in Mortal Kombat 9 was that he fit best with the overall tableau of the series as opposed to various other horror characters that were originally considered. Ever since, various other horror characters have appeared throughout the franchise, including Jason Voorhees from Friday the 13th, the Xenomorph from the Alien franchise, Leatherface from The Texas Chainsaw Massacre and the Predator from the Predator franchise. Other horror characters are also rumoured throughout the internet to be appearing in the latest instalment of the series, including Michael Myers from Halloween (who was originally considered along with Freddy Krueger), Pennywise from It and Pinhead from the Hellraiser franchise.

Arguably the most recognizable character from the franchise is Scorpion. Officially recognized as the series’ mascot, ahead of the character’s long-standing rival Sub-Zero, Scorpion, according to John Tobias, was designed along with Sub-Zero to create a contrast between two palette-swapped ninjas in the context of one being the hunter, and the other being the hunted. The creation of the two ninja characters also led to the creation of many others via palette swapping throughout the original trilogy, including Reptile, Ermac, Rain, Smoke and Noob Saibot. Ed Boon had voiced the characters since the original game released in 1991, which puts him in the Guiness Book of Records for having voiced the same character over the longest period of time pre-dating the likes of Charles Martinet as Super Mario and David Hayter as Solid Snake.

And so concludes the 10-Hit Combo feature. I’d like to take this opportunity to personally thank everyone who has taken the time to read this collection of articles, as well as ActionAGoGo.com for hosting it. It’s been a pleasure to work for the guys at this awesome website and I am very much looking forward to writing many more articles in the future.