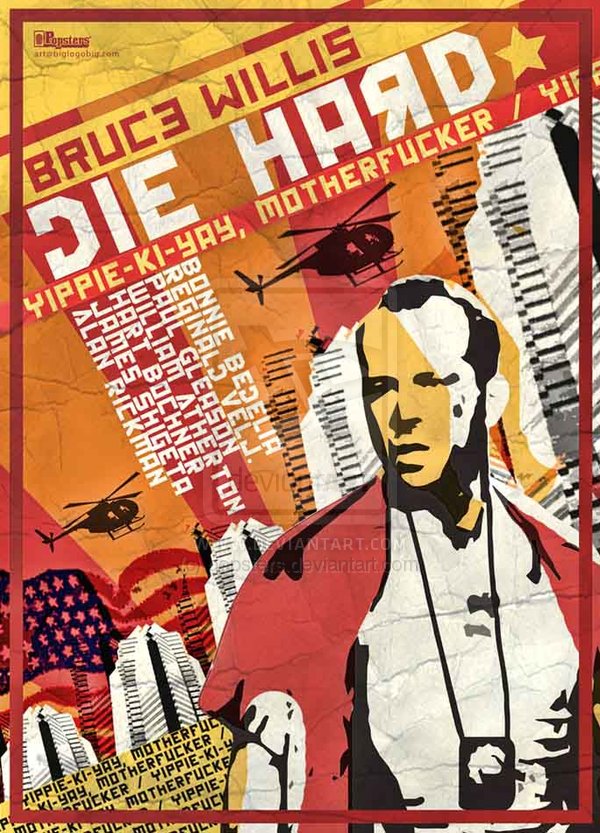 Often imitated, never replicated, DIE HARD (1988) still stands as an action movie masterpiece. It’s got everything you can ask for in an action movie. A fantastic script, a unique setting, iconic performances, and intense action scene after intense action scene. Oh…and an amazing soundtrack.
We all know the story. John McClane (Bruce Willis) heads out to L.A to visit his family. His first stop is a party at his wife’s workplace. Her name is Holly Gennaro McClane (Bonnie Bedelia). While at the party all hell breaks loose when a group of terrorists lead by Hans Gruber (Alan Rickman) storm the skyscraper and take the whole thing over. Of course, only John McClane can stop them.
While it may be a simple recipe, the execution of said play is nothing short of spectacular. The acting, for instance, is the unsung hero of this movie. If you look at all of the performances given not one can be seen as weak. Also, every character has their own little space carved out in the movie and is allowed to shine.
This is in marked contrast to other action classics up to this point. Think: THE TERMINATOR (1984), RAMBO FIRST BLOOD PART 2 (1985), NO RETREAT NO SURRENDER (1986), or ROBOCOP (1987). Sure, all of these movies have great casts with great characters, but none of them match DIE HARD when it comes to the breadth of emotion and story.
We get even the most mundane characters. For example, take Harry Ellis (Hart Bochner). His death is unique because he’s pitching to the terrorists before getting shot in the head. Before that, we see that he’s obviously trying to get with McClane’s wife, creating a minor love triangle that’s destroyed once he is executed. Because of his execution, we learn just how serious these bad guys are.
In the other previously mentioned flicks, the first execution would be a screaming, no name hostage that the viewer barely get to know. In DIE HARD, these characters are savored and brought to the forefront, which makes it a much more engrossing film on every level.
Besides the aforementioned Hart Bochner, there are many standout performances. As Sgt. Al Powell, Reginald Veljohnson is a great pseudo-sidekick, playing the role of a bumbling beat cop on the sidelines.
The same can be said for William Atherton’s excellent slime ball reporter, as he a character type that Atherton seems destined to eternally play. was typecast as that in other movies. (And if you don’t believe me then check him out in GHOSTBUSTERS.)
Of course, the two standouts are Bruce Willis and Alan Rickman. They only meet for a scene or two, but the chemistry is fantastic and each brings maximal performance to the screen. 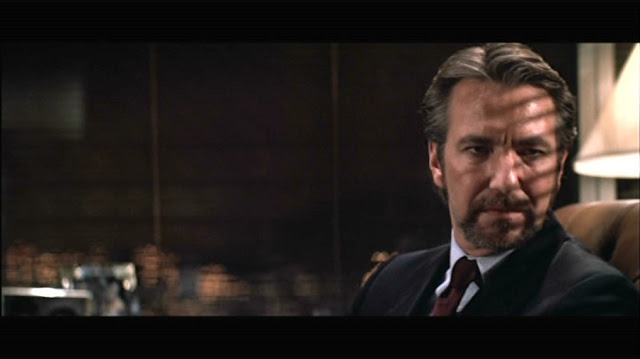 Rickman is so affable and charming it’s hard not to root for him along the way. It’s like you want him to just get what he is looking for and gingerly hop on a helicopter for his next heist. It’s still his best performance, and possibly the best villain of the 80’s. 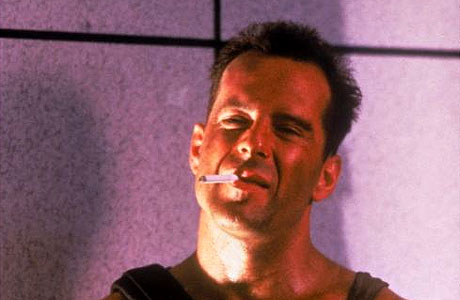 Bruce Willis on the other hand…what can be said? He helped create a character that’s had legs for the last 25 years and shows no sign of loosing popularity. In John McClane we have more than the average action hero. McClane is a hero who struggles. Hell, he spends a good chunk of the movie trying to convince other cops just to show up! Thee authorities aren’t even on his side! But as the movie progresses we see the whole mess start to wear McClane down physically. By the end, he’s not stone faced and standing tall like the machines in ROBOCOP or a force of a nature like John Rambo. He’s limping along bleeding all over the place and is barely coherent. But he will not stop. And he will not lose. This makes him one of the most relatable action heroes of the 80’s, and of course well into the 90’s and the next century.
JOHN MCTIERNAN:  THE MAN, THE MYTH, THE INCARCERATED… 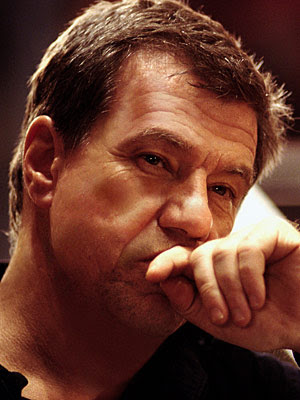 A huge part of what makes DIE HARD work is the relentless artistry of John McTiernan. Besides the actors themselves, I’m sure McTiernan was responsible for bringing all that talent onto the screen. It’s something he was able to do with PREDATOR (1987), but in a totally different context.
With PREDATOR (1987) we got to know each and every character with a scene here and an interaction there. By the end of the first act we’ve got a good baseline of all of the characters involved. We know these characters. We also get to know the jungle they are running through and the dangerous creature hunting them. But it’s all done in bits and pieces that equal one magnificent whole.
DIE HARD inherits this economy of characterization and manages to extract even more from its setting. In the skyscraper we have a cage. The rats can see the outside world but cannot touch it. This makes all of the characters isolated to a certain degree, and with that isolation we are able to peer into their lives and get to know them in way’s that other action movies don’t dare to travel.
Also, McTiernan revels in turning the genre on it’s head. In DIE HARD, we have police officers and FBI agents, traditional symbols of authority, nearly all portrayed as self-absorbed idiots throughout the film. As a matter of fact, whenever they get involved things get worse. Even McClane himself is simply a problem that won’t go away. It’s the best and most ironic joke in the film that isn’t repeated as heavily in rest of the series.
WHAT’S ACTION A GO GO…
Everything.
It’s also a Christmas movie. It’s important to remember that.
THE VERDICT
DIE HARD will probably never be beat.
A GOOD DAY TO DIE HARD is going to try and walk in it’s footsteps, and hopefully it will give it a good go.
Next on the list is DIE HARD 2. Often forgotten in the wake of DIE HARD  and DIE HARD WITH A VENGENCE (1995), we’re going to see what we can drag out of “DIE HARDER.” I think it will be fun.
We hope you enjoyed this, and please leave something in the comments if you want to add anything or just let us know what DIE HARD means to you.
Derek Scarzella
P.S  Oh, and here are some funnies… 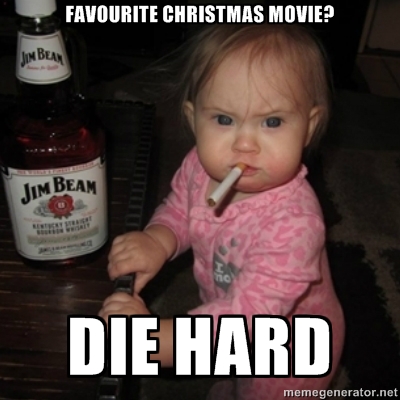 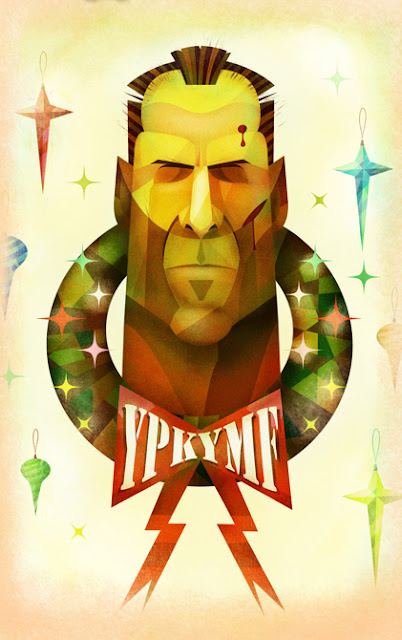 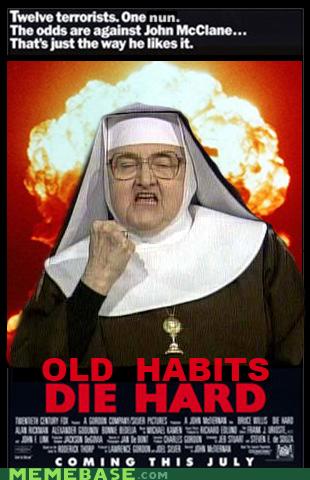